R. Sampanthan’s full speech at the No Confidence Motion debate 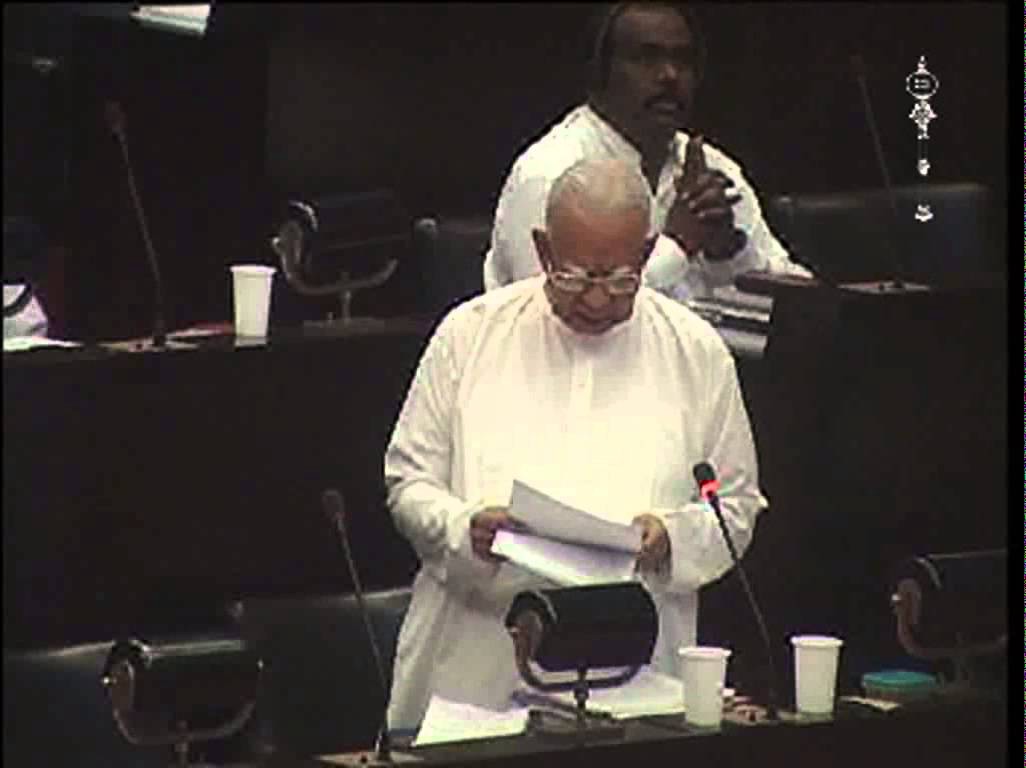 The Hon. Rajavarothiam Sampanthan – Leader of the Opposition).

Mr. Speaker, we are debating today a Motion of No-Confidence against no less a person than the Prime Minister and the Motion substantially deals with the question of corruption. Corruption has been the worst disease that has afflicted our country. There was a time when there was no complaint of corruption. But, in recent years, corruption has been the worst disease. As I said before, that has afflicted the country and it must be eradicated completely. There can be no question about it. The roots of corruption must be eradicated, and I think there is a general agreement that politicians probably constitute the roots of corruption. I think that needs to be addressed and that needs to be eradicated. Any complaint of corruption must be fully investigated and the severest punishment must be awarded to persons found guilty of corruption. There can be no compromise whatever in regard to that position.

In regard to the Central Bank Bond scam, consequent to investigations, two persons are presently in custody. There has been a warrant issued against another person and investigations are proceeding. No one should be spared. The rule of law should be applicable to everyone whoever he might be: the rule of law can be no respecter of persons.

In regard to the timing of the Motion, Sir, this Bond scam occurred three years ago. It has been the subject of total public focus for a long period of time, from early 2015. Why has this Motion of No-Confidence been brought against the Prime Minister only now? I have a duty Sir, to answer some of the questions I have raised. I want to pose the question whether this Motion against the Prime Minister is the first step in a plan to bring down totally and completely the present Government. The President, His Excellency Maithripala Sirisena, was elected in January, 2015. The Prime Minister, the Hon. Ranil Wickremesinghe, was elected in August, 2015. They were elected on a certain mandate. What was that mandate? Firstly, the resolution of the national question which has plagued this country for the past 70 years. We have had a very cruel and wicked war that had raged in this country for a thirty-year period. The Thirteenth Amendment to the Constitution was enacted in 1988. It is found to be inadequate, insufficient and ineffective. During President Premadasa’s time, there were steps to bring about new constitutional proposals. There was the Mangala Moonesinghe Select Committee, and there was a Report of that Select Committee with substantial consensus. Unfortunately, President Premadasa did not have a two-thirds majority and he was assassinated.

During President Chandrika Bandaranaike Kumaratunga’s time, there were various steps taken from 1994 until the August, 2000 Constitutional Proposals. They were quite advanced and a very substantial improvement on what existed. Unfortunately, she had no two-thirds majority in Parliament and she could not get that through.

Sir, the second item I would like to mention as a part of the mandate that was granted to President Maithripala Sirisena and Prime Minister Ranil Wickremesinghe was to uphold the democracy in this country and avoid this country moving towards totalitarianism and dictatorship. The enactment of the Nineteenth Amendment in this Parliament was the first step in that direction.

I think the third item in that mandate of significance was uplifting the economy so as to give our people a better quality of life, and eradication of corruption and waste was one aspect of that matter. These were the main issues during the campaign.

The President and the Prime Minister were elected on the democratic verdict of the people for certain fixed periods of time under the Constitution. The opposite camp was defeated in both the Elections. Everyone knows who were defeated. What was the mandate the people gave? I think, Sir, the mandate the people gave is best reflected in the opening address made by His Excellency President Maithripala Sirisena when he addressed Parliament on the 01st of September, 2015 when he outlined and made an official Statement on Government Policy in Parliament.

Sir, I would like to read from that Statement of Policy defining the mandate, which His Excellency President Maithripala Sirisena made in Parliament. The English text of the address to Parliament by His Excellency the President states, I quote:

“I presume that this new Parliament marks an important turning point in the Sri Lankan political history. Since we gained Independence, we had experiences only about coalition governments formed by one main party with the support of other small parties…..”

He referred to the fact that in this Parliament the two main Parties shall come together.

It further states, I quote:

“The main objective of the consensual government that is formed based on the concept of national government is to build reconciliation among all the ethnic groups and achieve social and economic development simultaneously and achieve a high human development enabling us to face the new world that will dawn by 2020 and to face the national and international challenges in the similar manner.”

He went on to say, I quote:

“Hon. Speaker, the identity of a nation or a country is based on its Constitution. That is why a Constitution is considered supreme. During the 60 years after Independence, we have adopted three Constitutions. Yet, it is unfortunate that we have not been able to adopt a Constitution which enables all of us to agree as a single nation.”

His Excellency President Maithripala Sirisena clearly stated that we have not been able to agree upon a Constitution which made us a nation.

During the course of his speech he further said, – I will avoid quoting the exact words to save time, Sir. – “We, Parliamentarians comprising of communities that are Sinhala, Tamil, Muslim, Burgher, Malay and Adivasis must live in harmony. There must be a reconciliation. We must coexist and I, as President am dedicated to the achievement of these objectives.”

He concluded his speech, Sir, on the same lines.

“From now on, I make an appeal to all of you, with respect, to pay your attention, as to how the consensus-based co-operation of both the people’s representatives and all the parties that represent Parliament founded on the collaboration of the two of major political parties could be utilized in favour of the progress and forward march of the nation in a way the proper political culture which is being developed is further established.”

He advocated that both the Parties come together in order to constitute the people of this country – of the Nation – and to give them a new Constitution.

I will not quote extensively from that speech, Sir, for lack of time. I will move on to my next point.

At the Local Authorities Elections held in February, 2018, a new political formation, Sri Lanka Podujana Peramuna, has done better than the President’s SLFP or the UPFA or the Prime Minister’s UNP or the UNF. It is our view that inadequate performance by the Government in the first half of their term was the cause of that result. If they performed better in the remaining two-and-a-half years, public disenchantment can change. Unfortunately, the Sri Lanka Podujana Peramuna does not want that to happen. They want to first defeat the Prime Minister and the next target will be the President. They want the Government brought down. We want the Government to implement the mandate given to it by the country in January and August, 2015. In these circumstances, how can we possibly support this No-Confidence Motion, Sir, when, particularly in relation to the Bond scam, the Motion does not reveal anything specific against the Prime Minister? The true intensions of the Sri Lanka Podujana Peramuna are shrouded in an environment of prejudice based upon the Bond scam. We cannot fall a victim to such machinations and allow ourselves to be used to achieve their political objectives.

We would call upon them to cooperate in the achievement of what is contained in the mandate that was granted to both the President and the Prime Minister. All of you in the Joint Opposition or most of you were Members of the Chandrika Bandaranaike Kumaratunga Government; you were Members of the Mahinda Rajapaksa Government and you were members of the Hon. (Prof.) Tissa Vitharana’s All-Party Representatives Committee. You played a role in the formulation of all those constitutional proposals. Many of you have participated in that; President Mahinda Rajapaksa has definitely participated both in President Chandrika Bandaranaike Kumaratunga’s Proposals and the Proposals during his own time.

We, therefore, have to cooperate, Sir, in regard to the making of a new Constitution. This Parliament has adopted a Resolution converting itself into a Constitutional Assembly unanimously with no one opposing it to frame a new Constitution. We have done much work on that; the Steering Committee, the Subcommittees have come up with their Reports. That process must continue if you want this country to succeed economically. We are a small country, but we are both militarily and economically very strategically located in the Indian Ocean region. We can become the economic hub of the Indian Ocean area. We can have access to wide and large markets if our economy can improve and our economy can improve only if there is genuine peace in this country and if all the people in this country; whether they be Tamils, Muslims, Sinhalese, Burghers, Malays or whomever are able to live as equal citizens. So, I think Sir, your duty must be to cooperate with the Government and join together in keeping with the unanimous resolution we adopted to frame a new Constitution and we should move forward in regard to that matter. That is necessary in the interest of this country and we have to work together.

When the UNP Government sought to deprive Mrs. Sirimavo Bandaranaike of her civic rights in the 1977 Parliament we resolutely defended Mrs. Bandaranaike and opposed that Motion. We were under great pressure from UNP leaders not to defend her. I remember I was a new Member of Parliament having come to Parliament for the first time in 1977. I myself very strongly defended her.

Therefore Sir, the view that we are with the UNP and against the SLFP has no foundation whatever. My late leader Mr. S. J. V. Chelvanayakam always told me, “Sampanthan, we must work with any Sinhala political party, with the confidence and support of the Sinhala people, prepared to resolve our question.”

In that respect, probably the SLFP has a greater contact with the Sinhala people than even the UNP. So, we are concerned, Sir, in the interests of this country, in the interests of all the people in this country in working together with the two main political parties, we would like all of us to come together. I will make an appeal to the Hon. Chamal Rajapaksa, the Hon. Dinesh Gunawardena and the Hon. Dullas Alahapperuma, who are senior SLFP members, we must come together and resolve this problem that the country is facing. This country has a different future; this country has a different destination. We must not lose our way. We must bring about permanent peace in this country, permanent amity in this country and permanent unity in this country. Constitute the people of this country the Sinhalese, the Tamils, the Muslims, the Burghers, the Malays into a Sri Lankan nation and move forward towards prosperity. If we do not want to do that and if we want to falter, then nobody can save you and eventually nobody will save you.

So, I would like to appeal, Sir, to all my Friends in this House, not to go against the verdict of the people that was given in 2015 to both President Maithripala Sirisena and Prime Minister Ranil Wickremesinghe, but to come together in a spirit of cooperation in the best interest of this country to resolve this country’s vital issues.

I thank you, Sir.