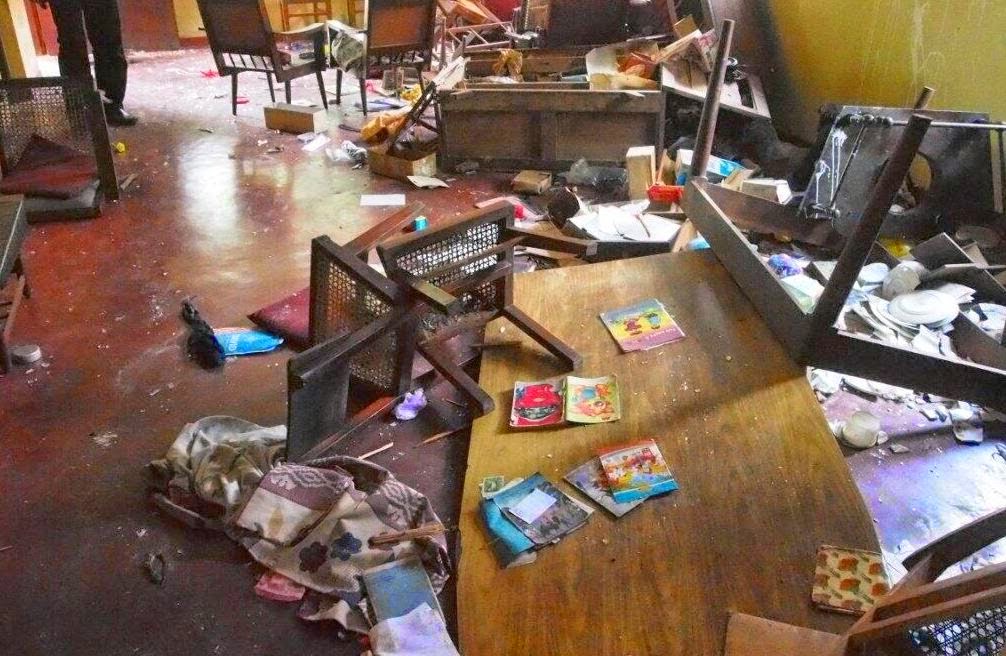 If the unchecked sectarian violence that erupted in Aluthgama and Beruwala a week ago left three dead, over 80 injured and thousands displaced, there was more to be seen last Saturday when a popular garment retail outlet in Panadura burned to the ground. Though people see this as sabotage, foul play or retaliation for the hartal launched by the Muslim community in Colombo and in other major towns on Thursday by unruly elements, the police say initial investigations have the fire it could have been caused by a short circuit.
A warehouse of a clothing store in Pepiliyana, also belonging to a Muslim, was attacked by unruly elements about a year ago over which the police took no action but simply watched while the act was in progress. The incident in Panadura immediately following the destruction in Alutgama, has caused a feeling of loss and hurt among the Muslims.
The assurances of the President, who returned to the country cutting short his visit to Bolivia, that all communities in Sri Lanka co-exist in peace, that they are free to follow their faith without any hindrance, and that it was only a handful of unruly elements who were behind the mayhem, has not in any way gone to heal the feelings of those who suffered damage and humiliation in the violence. Neither his visit to the scene of destruction and assurances to the affected people have had any effect on them; nor have these assurances soothed the concerns of the international community who are shocked by events unfolding in Sri Lanka, which lays claim to a culture of over 2500 years.
Events that have occurred in the country over the past few years have gone to strengthen the belief that there is utter mistrust among the people and that though we keep a smiling face and pretend to live in peace and harmony, there is an underlying hatred of those who are different from us. Racial hatred raises its head off and on. Places of worship have been attacked and destroyed by unruly elements, with the government and the people, majority of them, showing the least concern.
Law and order has broken down to such an extent that extremist organizations of monks run riot asserting their superiority over everyone, pretending they are some sort of militia installed by the government to right every wrong, without even a word of disapproval from the government. In every instance where these extremist elements engaged in their acts of destruction, the security establishment has stood-by providing security to the outfits and their cohorts, than the people suffering at their hands. This has even prompted the people to ask, who is in charge, whether it is the government or a set of unruly monks and their cohorts.
The pussyfooting by the government on the unchecked religious violence in Aluthgama, which has caused death, destruction, injury and misery to the people, has prompted moderates in the government to fix responsibility for the mayhem on the Bodu Bala Sena (BBS) and its General Secretary; and call on the government to act decisively and arrest those responsible. They had pointed out that it was not the people of the area who were responsible for the violence, but those brought from outside by these unruly elements. In the absence of a proper opposition, the government certainly has to listen to right thinking people in its own ranks and act sensibly if the country is to see any progress. The three decades of war has already ruined the country, and the people of this country certainly do not wish to undergo a similar experience again.
The ordinary citizen is seething with anger and disgust at what is going on around him with no way of giving vent to his exasperation. He is amused by the antics of the ‘Left Brethren’ who shout empty slogans, often irrelevant, just to show they are among the living, but hardly doing anything to offer relief to the suffering masses. The country is more like a circus, with everyone doing his own thing to amuse the other, when problem after problem piles up on the people with no solution in sight. Only diversions and empty rhetoric are offered as distractions.
The events in Sri Lanka over the past few days have already appeared in the radar of the UN, prompting a call from UN Secretary General Ban Ki-moon to express his concern and ask the government to take measures to safeguard the people. Navi Pillay, the UN High Commissioner for Human Rights, as well as several foreign embassies in the country, while expressing concern, have called on the government for measures to protect the citizens. No doubt there will be many more calls from countries and governments that are concerned about the welfare of this country and its citizens.
If things like this continue, a day will come when the government will not be able to say they are internal matters for the government of the country to handle, and the government would have to struggle even more than in the past few days when Parliament was asked to pass a resolution to prevent the intervention of the UNHRC into the human rights violations in the last days of the war.