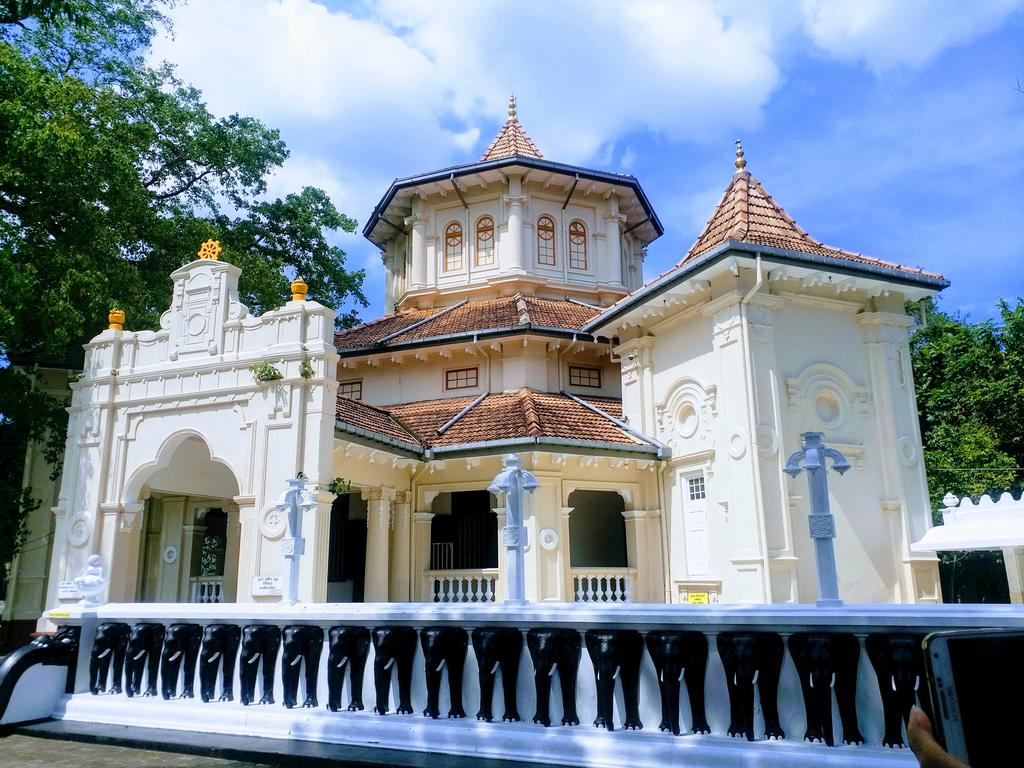 Allegations have resurfaced regarding large payouts to the former ruling family by another Chinese ports company, after Deputy Minister Ranjan Ramanayake, who is becoming a lone crusader against corruption, revealed a copy of a cheque to the tune of Rs. 19.41 million made out to the Pushpa Rajapaksa Foundation in 2012.

The transaction has been previously reported, with a B report filed in the Colombo Fort Magistrate’s Court, but Ramanayake’s exposes has brought new documents about the payment into public domain for the first time.

Pushpa Rajapaksa is the wife of then Economic Development Minister Basil Rajapaksa and the sister-in-law of former President Mahinda Rajapaksa. 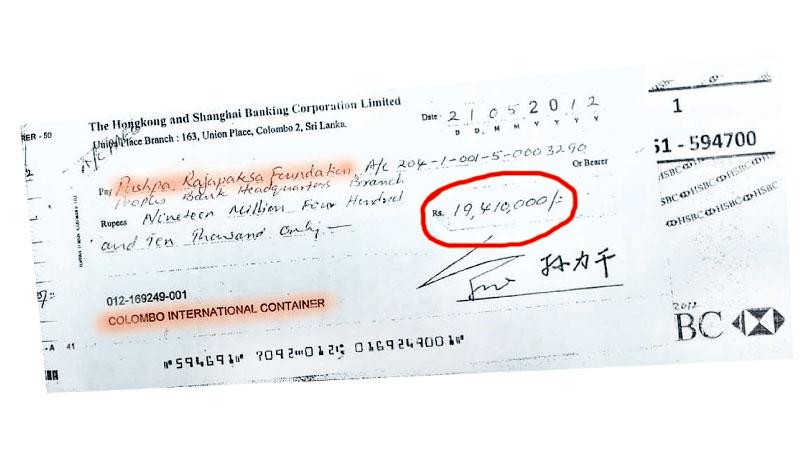 CICT was the company that received the contract to Build Operate and Transfer (BOT) the Colombo South Harbour extension in 2011. Its parent company, CM Ports, recently leased an 85% stake in the Hambantota Port.

CICT commenced operations in July 2013, just over a year after the cheque was issued to the Pushpa Rajapaksa Foundation. The Chinese-operated terminal is currently the best performer at the Colombo Port. The cheque is dated during a period when the terminal was still under construction.

The Auditor General has also directed several queries to the CICT through the Sri Lanka Ports Authority in November 2015. SLPA’s Director of Finance called for answers to the query which stipulated a figure of Rs. 600 million paid to the Pushpa Rajapaksa Foundation. CICT’s Financial Officer replied the SLPA saying the amount indicated in the letter was incorrect, with Rs. 19.41 million being the correct amount. CICT said the payment had been accounted in its ‘Construction in Progress Account’ of 2012.

CICT attached a copy of the relevant cheque and payment voucher in its response. The CICT payment voucher makes no mention of the Pushpa Rajapaksa Foundation, logging the Rs 19.41 million payment only as a “contribution made to a fund”.

The voucher is counter-signed by the financial controller of CICT, and under the “information of payee” section in the voucher, the word “cheque” is scribbled.

In March 2015, based on an explanation demanded by the Police Crimes Bureau, SLPA’s Director Finance wrote to the CICT CEO urgently requiring the Chinese owned company to clarify whether (a) CICT had issued the money out of its own fund, (b) whether the amount has been included in the construction cost of the terminal since it was issued during construction, (c) the source of the funds and (d) financial statements for the years 2011-2014.

The Pushpa Rajapaksa Foundation is a non-governmental organisation registered under the National NGO Secretariat. The Foundation’s registration number is 141912 and it is registered at the address No 78, Rosmead Place Colombo 07. A landline beginning with the area code 033 (Gampaha District), mobile number and fax line also with the area code 033 are listed as telephone numbers for the Foundation. Repeated attempts to contact officials attached to the Foundation on the listed numbers proved futile.

Today, No. 78 Rosmead Place houses a 15 room boutique hotel named FERN. Current occupants had no knowledge that the Foundation had been based at the address. The hotel commenced operations in March 2018.

The FCID was probing the transaction, and in April 2015, Colombo Fort Magistrate Priyantha Liyanage ordered the managers of two state banks and a private bank to hand over details of the account holder Pushpa Rajapaksa Foundation to the police. Police told court that the Foundation had been registered as a NGO in 2010 and said it was investigating fraudulent withdrawals of the money from its account at People’s Bank.

The FCID filed a B report (B 586/15) in the Fort Magistrate’s Court in 2015, and submitted the investigation report to the Attorney General’s Department on June 5, 2015, Sunday Observer learns.

In a media report in 2016, FCID sources were quoted as saying the CICT-Pushpa Rajapaksa transaction was one of the cases in which the AG’s advice had not been forthcoming nearly a year after the B report had been filed.

Officials of the People’s Bank, CICT and trustees of the Pushpa Rajapaksa Foundation have been questioned by the FCID about the controversial USD 150,000 transaction.

The FCID filed a ‘B’ report – B 586/15 in the Fort Magistrate’s Court and submitted the investigation report to the Attorney General’s Department on June 5 but are yet to receive advice from them,” sources added.

While the transaction amounted to a massive conflict of interest, since Pushpa Rajapaksa’s spouse was serving as a powerful minister in the then Government, who controlled vast amounts of the public purse, it is unclear if there are legal grounds to act against the foundation or the company in question, unless there was clear evidence of fraud, legal experts told Sunday Observer.

But Deputy Minister Ramanayake vowed to pressure the Government to appoint a Commission to investigate the allegations. “The Rajapaksa family is well known for receiving money through foundations. The best example would be ‘Helping Hambantota’. This is a dangerous situation and we must investigate these frauds properly,” Ramanayake told the Sunday Observer.

Edirimanne said the Minister did not wish to comment, but would issue a media release today following a legal consultation. CICT officials could not be reached for comment on the allegations.