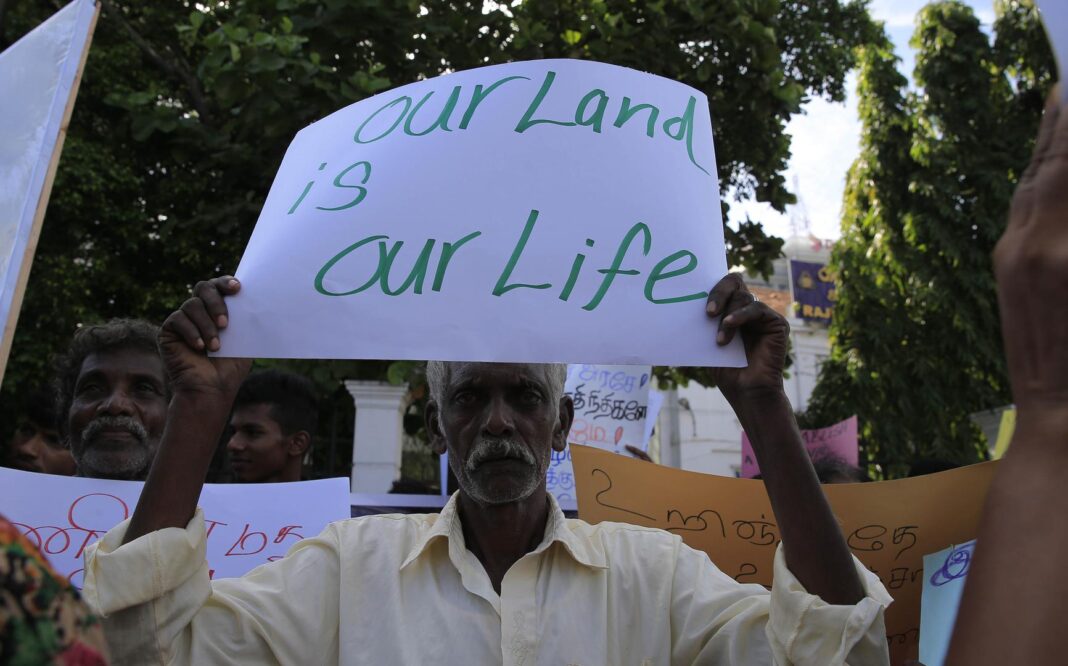 In recent times more protests have been reported in the Tamil dominated areas of Sri Lanka against land grabbing attempts by the Archaeology Department in the guise of reestablishing ancient Buddhist shrines. New Buddhist temples are being built-in some of those Tamil-dominated areas archaeology excavations are taking place. 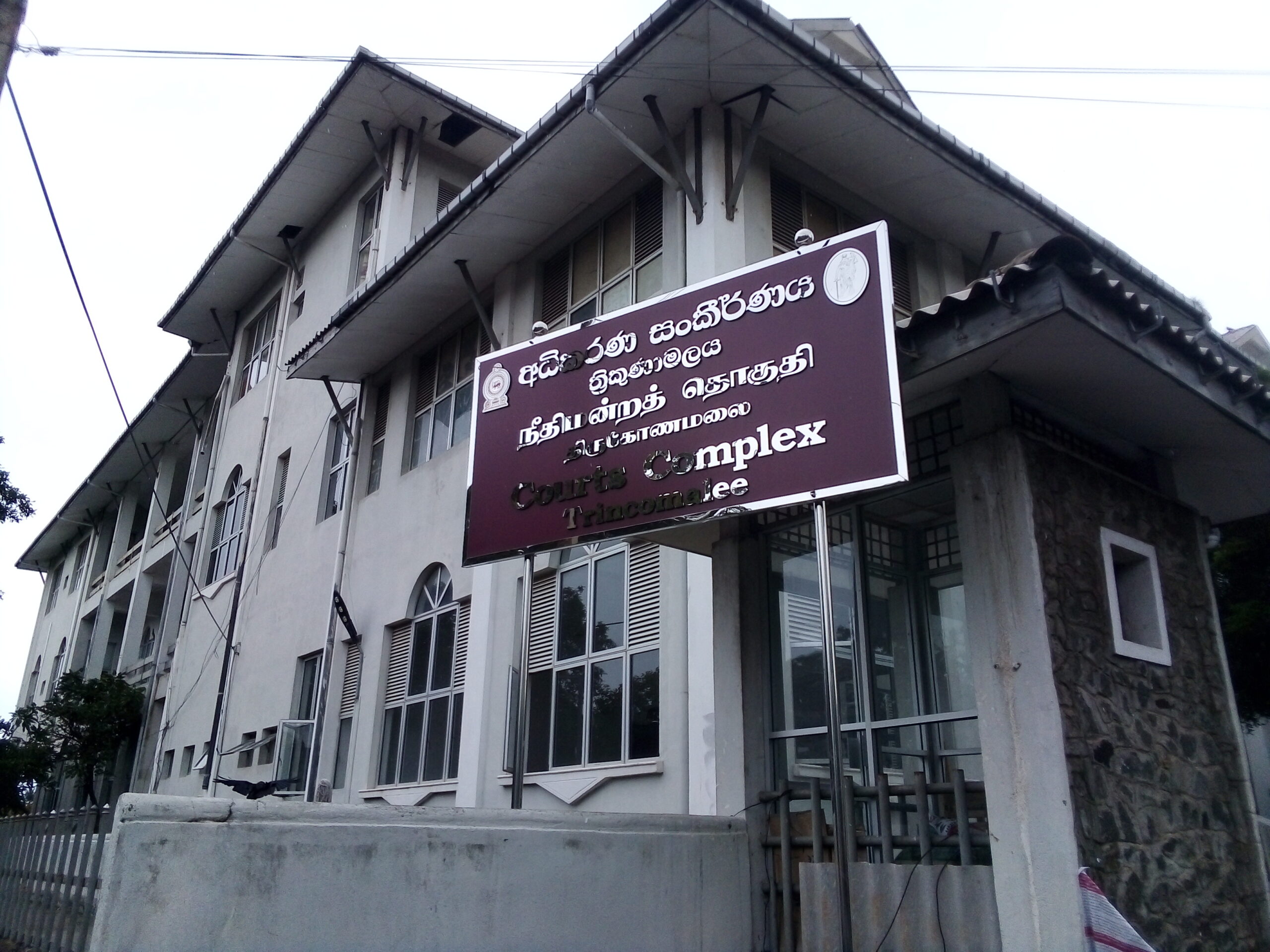 The Trincomalee High Court issued a temporary injunction today against the occupation of the agricultural lands belonging to the Tamil people in the Thennamaravadi and Trincomalee areas, occupied by the Sri Lankan Archaeology Department in Trincomalee.

The Archaeology Department occupied the historical Tamil lands in Thennamaravadi and Thiriyai, which Tamils have used for agriculture for many centuries, and marked the lands by placing boundary stones.

The Department confiscated over 300 acres of land around these villages in Trincomalee district in late September after they were identified as ‘archaeological sites’.

The Sri Lankan police, Archaeological Department and the Land Commissioner Department have recently undertaken efforts to prevent Tamils from engaging in agricultural activities on their land.

A case opposing this land occupation was filed by Attorney Kirushanthini Uthayakumar and was heard at the Trincomalee High Court by Justice M. Ilanchezhiyan today. Tamil National Alliance (TNA) MP and lawyer, M.A. Sumanthiran and former Northern Provincial Council Member and lawyer, Kesavan Sayanthan were present at the hearing.

Following the hearing of the case filed in the High Court, Justice M. Ilanchezhiyan ordered that a temporary injunction will be imposed and that there should be no obstruction to the agricultural activities of the Tamil farmers. He stated that the case would be taken up again on 23rd November 2020.

The Sri Lankan Archaeology Department has been notoriously known for ramping up efforts to colonise the Tamil homeland with military assistance from the Sri Lankan state this year. They have been accused of attempting to ‘Sinhalise’ Tamil historical and cultural artefacts by Tamil politicians, locals, landowners and organisations under the guise of identifying Tamil-owned land as ‘archaeological sites’.

Last week, the Archaeology Department, along with Buddhist monks, surveyed the Vedi Arasan fortress in Neduntheevu, Jaffna and filmed the historical area and its surrounding areas. The Buddhist monks claimed the Vedi Arasan fortress belonged historically to a Tamil Buddhist King and then went on to assess the archaeological details of the area with the Sri Lankan archaeology department.

Locals across the North-East have slammed the attempts by the Department of Archaeology to Sinhalise the North-East. The latest court ruling offers a small temporary reprieve against the rising Sinhala-Buddhist chauvinism through land occupation across the Tamil homeland.

The Tamil National Alliance Mullaitivu District politicians are protesting against the construction of a Buddhist temple at Bogaswewa near the Sapumalgaskada archaeological site. They claim that the area traditionally belongs to the Tamil people.

TNA Northern Provincial Council member elected from Mullaitivu District T. Raviharan says that the area belongs to Tamil people traditionally and it was known as Kachchcalsamalankulam.

The PC member says that Tamil people have been given paddy fields and they are cultivating them with water from the Kachchalsamalankulam tank; it is wrong for Buddhist monks to come there to construct a temple in an area which is predominantly Tamil. He says his party will raise objection in Parliament too.

The chief incumbent of the temple had secured the help of the security forces to make bricks using clay from the shrub jungle area and trees were being felled in nearby jungle to fire the bricks, PC member Raviharan said, adding that state officials responsible kept mum about the destruction being wreaked on the jungle.

A spokesman for the temple said that Sapumalgaskada area had been identified as a site of archaeological importance and there were ruins of Buddhist shrines, which were some thousands of years old and it was wrong to claim it was not a Buddhist site. The bhikkhus had only revived a temple close to the archaeological site, he said. 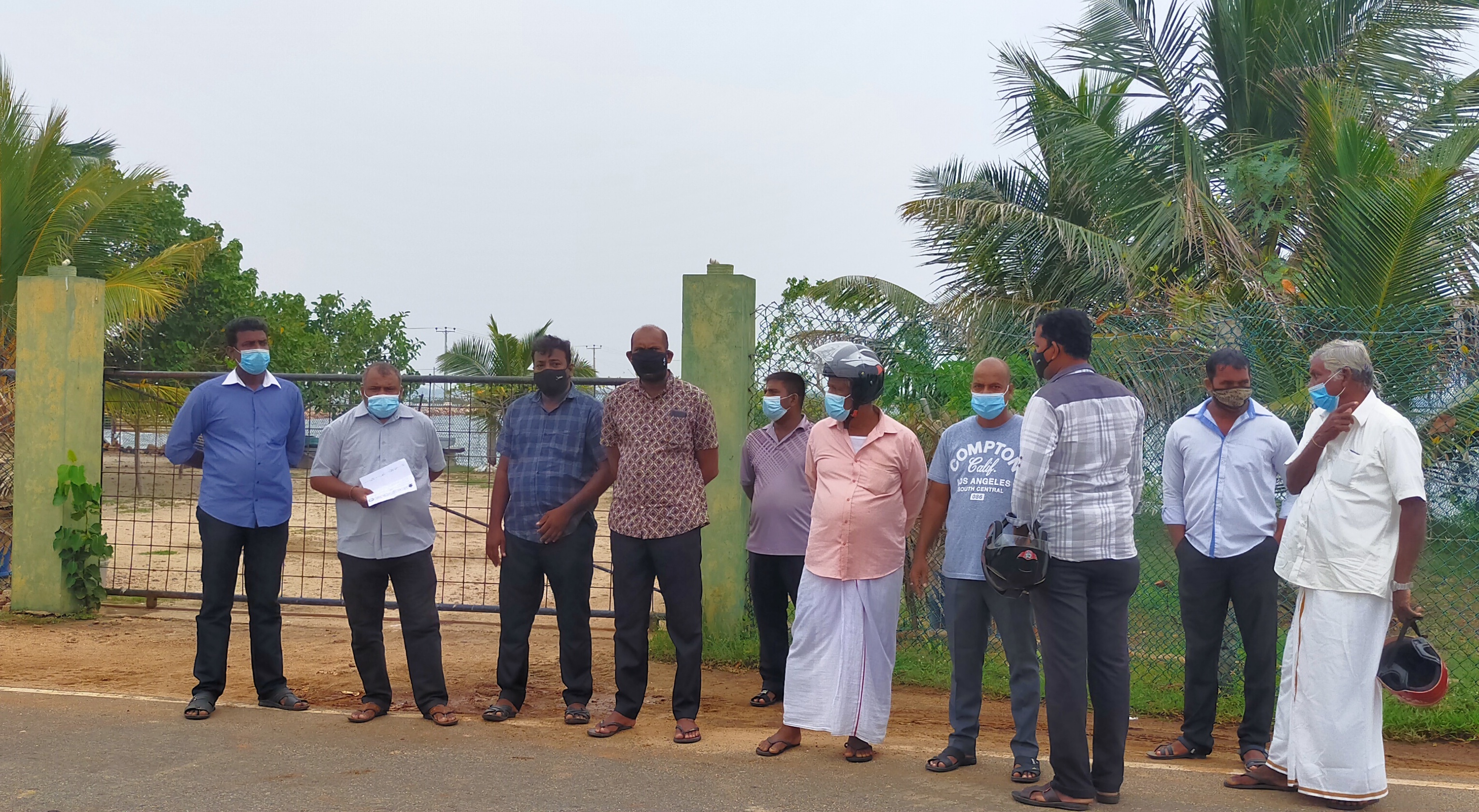 The Sri Lankan navy’s attempt to occupy land owned by Tamil locals in Jaffna have been temporarily thwarted by protests led by Tamil politicians and locals.

The Sri Lankan land department were set to survey the public lands in the Mandaitivu area of the Velanai Divisional Secretariat Jaffna – where a Sri Lankan naval camp has been set up – but were not allowed to do so due to the protests held in front of the land survey site, earlier today.

Tamil politicians, such as Tamil National People’s Front (TNPF) general secretary and parliamentarian Selvarajah Kajendran, Tamil National Alliance (TNA) members including the former Northern Provincial Council member Vinthan Kanagaratnam, and other locals in the area all came together to stage a sit-in protest in front of where the land surveying was proposed.

Since the governance of Gotabaya Rajapaksa last year there has been an upsurge in land-related concerns and militarisation with a similar protest held against Sri Lankan navy occupation efforts of Tamil-owned land in Mathagal, Jaffna. Earlier this month, an Eastern Provincial Council member urged the Sri Lankan government to stop ‘premeditated Sinhala occupations’ in Batticaloa in response to the illegal occupation efforts across the district. Last month, a TNA MP who warned against Sinhala land grabs in Batticaloa was fired for his comments.