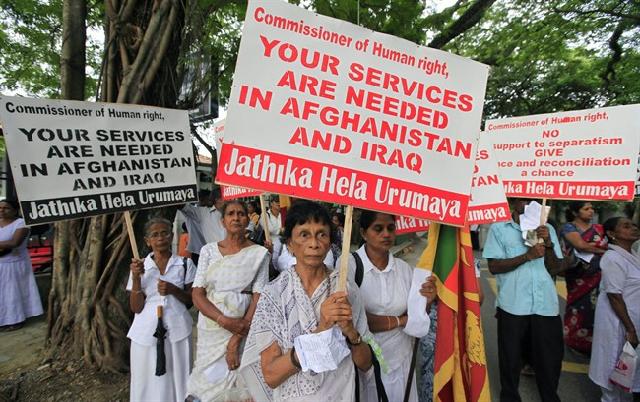 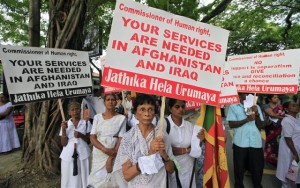 Hundreds of Sri Lankans protested Thursday against a visit by U.N. officials to discuss human rights issues during the country’s civil war.

Monks led about 300 protesters from the Buddhist nationalist National Heritage Party during the demonstration opposite a local U.N. office. They complained Sri Lanka is being unfairly criticized for alleged abuses as the war was ending in 2009.

{photo: Supporters of Jathika Hela Urumaya, Sri Lanka’s pro-government political party, hold placards in a protest outside the United Nations office in Colombo, Sri Lanka, Thursday, Sept. 20, 2012. The United Nations had recently singled out 16 nations including Sri Lanka for cracking down on critics, saying most of those countries’ governments are going unpunished for their acts of reprisal. (AP Photo/Chamila Karunarathne)}

They alleged the visit was a step toward subjecting Sri Lanka to an international war crimes investigation.

A U.N. report found evidence the government and Tamil Tiger rebels committed rights violations during the war. A U.N. document said earlier at least 7,000 people were killed in the last five months of the fighting alone.

The U.N. Human Rights Council adopted a resolution earlier this year urging Sri Lanka to investigate alleged war crimes committed by both sides. The visits are seen as a follow-up to the resolution, which also asked Sri Lanka to accept expertise from the office of U.N. human rights commissioner.
AP