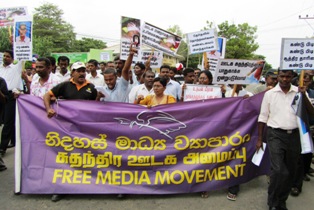 More than 200 media workers, politicians and activists from North and South joined hands at Jaffna Bus Station staging a protest Tuesday from 11:00 a.m. till noon against the brutal assault last month on Gnanasundaram Kuganathan, the chief news editor of Uthayan daily in Jaffna and against the prevailing suppression of freedom of expression in Jaffna.
Five Colombo-based media organisations arranged the protest together with the journalists in Jaffna. On Monday, the Sri Lankan Police had claimed that they have arrested the suspect at Kalubowila Hospital in Colombo. However, the media sources in Jaffna told TamilNet Tuesday that the said person was not the real culprit.

Following international pressure on Colombo, demanding investigation, Rajapaksa regime came with a news item that the SL president had asked his Inspector General of Police to submit a report on the assault on the Jaffna journalist.

The arrested suspect is a criminal in Jaffna and had received cut injuries in a clash in Koappaay. He was admitted to Jaffna Hospital and had later gone to Colombo for treatment, sources in Jaffna said.

Unidentified persons who came in motorbikes assaulted Mr. Kuhanathan on his way home on 29 July.

“The attack, reported within 6 days after the conclusion of the civic elections, has cast severe doubts,” said Sri Lanka Tamil Media Alliance in a statement issued following the report of the attack.

The Journalists for Democracy in Sri Lanka (JDS), an exiled group of journalists, said: “Angered and humiliated by the verdict of the people, the government appears to have reactivated its paramilitary groups and killings squads to intimidate and carry out attack on local leaders and media as means of political reprisals.”

Immediate demilitarisation in the north should be the key to any meaningful exercise to restore democracy and normalcy, the JDS has said.

Since year 2000, six employees of Uthayan newspaper including two journalists, Raji Varman and S.S.R. Sugirtharajan, have been killed. But the Sri Lankan authorities have not arrested a single person to date in connection with the killings.

Till the end of Vanni war in May 2009, Mr. Kuganathan was living inside the paper office for 3 years as the newspaper had come under attacks by occupying SL Army-backed operatives in May 2006 and in March 2009.

On Tuesday, protesters, including journalists, Tamil parliamentarians and South-based civic rights activists staged Tuesday’s protest in Jaffna city were confronting the Sri Lankan Police and SL Army intelligence operatives who were deployed at the site of the protest in a threatening manner against the participation of journalists in Jaffna.

The southern journalists confronting the Sinhala policemen began to march along the Hospital Road for 300 meters before concluding the protest as the SL Police did not cooperate with their request to keep the traffic away from the site of the rally.

Mr. Nimalarajan, 38, was the Jaffna correspondent for the Tamil daily Veerakeasari, the independent Tamil radio station, Sooriyan FM, the popular Sinhala political weekly, Ravaya, the Tamil and Sinhala services of the BBC. He was killed allegedly by the EPDP paramilitary, for his reporting of the intimidation, thuggery and election malpractice during the October 10, 2000, elections in Jaffna to the SL Parliament.

Nimalarajan had told TamilNet three days before his assassination that he was worried about his safety and that the SLA soldiers had visited him for an inquiry the day before.

The Nimalarajan murder case was stuck in the courts in Sri Lanka without any progress for years, despite the arrest of four EPDP suspects. The suspects were later released on bail.
TN 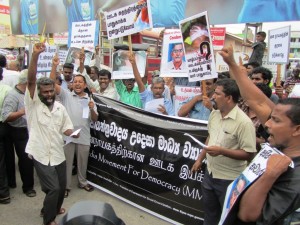 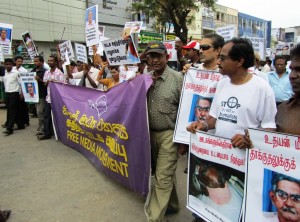