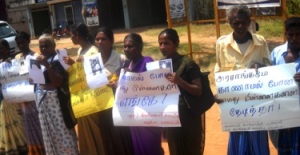 The protest which was held in Kilinochchi town under the patronage of Api Sri Lankikayo organisation was said to be attended by large number of family members of those who disappeared.

Premaratna also said that the military attempted to force about 150 persons into buses and  send them away without letting them to participate: “However, there attempts were not successful to disrupt the protest and we held it successfully. They detained our members Yogendran and Lalith Kumara too”

He also said that a considerable crowed attended the protest despite Army banning protest campaigns in the area claiming it is a military ruled area.
LT