Protest against ‘unethical media practice’ opposite all media institutions 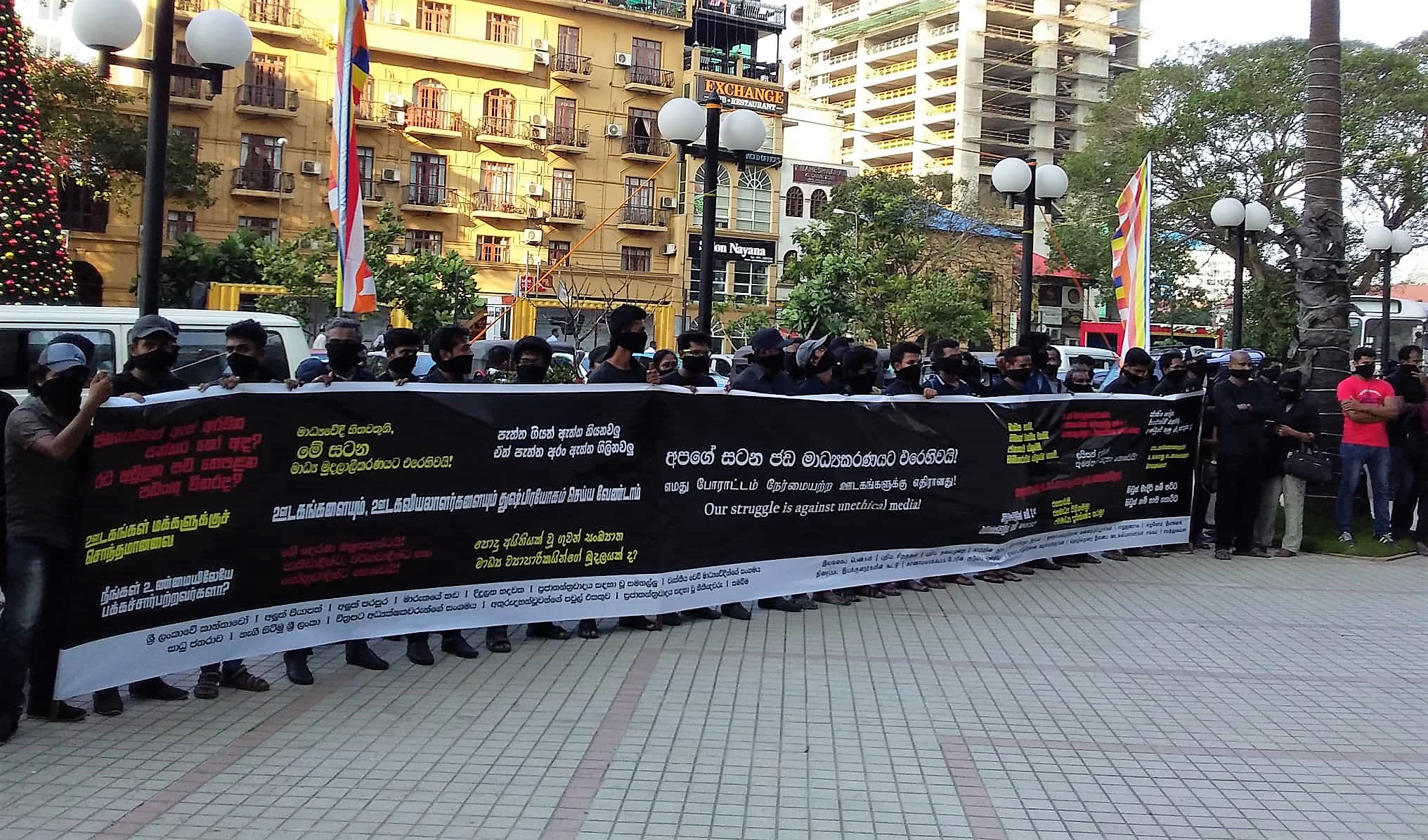 Progressive organizations, artists and civil society activists carried out a silent protest campaign opposite all print and electronic media institutes against the unethical media practice in the country today and handed over a document to media institutions.

Among the organizations that took part in the campaign were Women of Sri Lanka, The New Wings, Aluth Parapura, Voice of the Winds, Shining Heart, Butterflies for Democracy, Professional Web Journalists’ Association, Sadhu Janarava, Rise Up Sri Lanka, Film Directors’ Association, Family of the Disappeared and Lawyers for Democracy.
The document they made available to media institutes: Media Owners, and Journalists,.

We are watching you!

It has fallen upon us to remind you of media integrity and values once again, due to the non-constitutional and un-democratic conspiracy that happened on 26th October last year in which you actively played a part. We consider that incident clearly as a deterioration of media values, which were disregarded when reporting on the coup’s events. This type of reporting is not a new trend, but your reaction to the events of 26th October reflects the extent to which you can be insensitive and illogical.

You have compromised the common belief of media being unbiased and democratic by engaging in biased, partial reporting while propagating illegal activities. We would like to remind you, media personnel, that you are privileged and benefited by the frequency which is a property of common people of this country. The public possesses the power of questioning you. As rightful citizens, we would like to remind you of few facts where you have overshadowed that right and to tell you again how you should uplift the image and quality of the media.

It is vital to engage in truthful reporting and take accountability on what is being broadcasted. For instance, a particular media house has reported the Supreme Court’s decision to overturn the President Maithripala Sirisena’s decision of dissolving the parliament as the Supreme Court overturning the President’s decision for a General Election. This cannot be considered as fair reporting but a conscious distortion of the truth. Several other similar reports were noted during that period which influenced the readers and the audience.

Commercialization of media institutes enforces the fact that media institutes are misguiding the expectations of the general public while attempting to satisfy your political agendas and financial greed. It is not a secret that your intentions are not what the common people need. Even though you are not capable of reporting both party’s views, it is your obligation to engage in unbiased and fair reporting on behalf of the public.

We have been suffering from violence during 30 years of civil war as a result of unruly political games and racial disparity propagated by various governments. You have a responsibility to eliminate the messages triggering racism, which have been nurtured by political parties to serve their own interests. Why propagate racism with your reporting, and not attempt to build reconciliation among Sinhala, Tamil, Muslim and other ethno-religious groups?

It is obvious that you do not have accountability towards the victims you report on. The homicide incident of a young boy killing another in Matara, for an example, is vividly reported in the media without considering the harmful impact those graphics and images will have on many viewers. Most reporting does not respect the identity of individuals be they children, women, members of the LGBT community, those coping with mental health issues or victims of violence.
Accountability

A meaningful media is accountable to the people. Media institutes should be accountable for a society where everyone is treated fairly, rather than following agendas of a minority and always seeking financial gains.

The existence of media institutes is dependent on the inalienable democratic right of freedom of speech. However, rarely does a media spokesman differ from a puppet of an undemocratic government if that person supports such undemocratic acts. Your information is only valued if you give a credit to your profession and attempt to protect democratic values. We would like to remind you that your media license does not give you the power to manage the country’s politics. Therefore, it is your responsibility to create a dialogue on the values and rights of all citizens; this must be protected within your profession. We will be watching you!