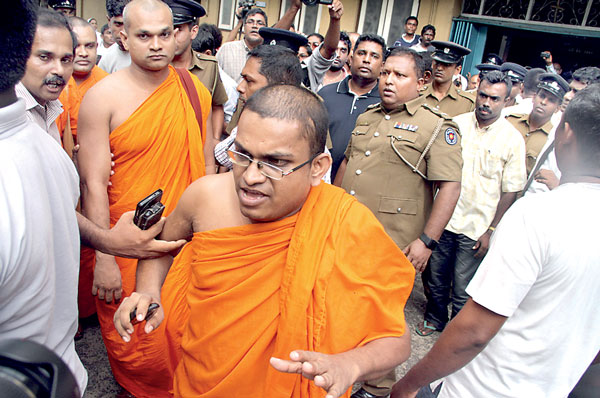 Buddhist monks led violent mob entered by force the Centre for Society for Religion in Colombo today ( 04 Aug 2014) and disrupted a peaceful gathering of families of disappeared persons. Police as usual became mere onlookers, while monks and mob haul abusive language and threatened organisers. In practice the police play the role of collaborators by not implementing peoples right to association.

This is an one more incident of the continuing trend of disrupting civil society events by the monks and mobs enjoy government patronage.

The meeting was organised by the ‘Right to Life Human Rights Centre.’  Number of  representatives form the western diplomatic missions in Colombo too were present at the meeting. The missions had to dispatch their security personal to the venue as the mob seiged the centre after they were evicted form the premises.

Issuing a statement the embassy fo the USA said that “The mob shouted hateful slogans, made unfounded accusations and behaved threateningly towards the families of the disappeared”

On August 4 a meeting that included U.S. Embassy officials was interrupted by angry protesters, including a group of monks. The mob forced its way into the meeting on the grounds of a Colombo Catholic church, where families of disappeared persons from the civil conflict were sharing their stories with civil society groups and members of the diplomatic community. The U.S. Embassy is concerned that the initial reaction of the local police to this disruption appeared to be in support of the mob’s efforts to shut down the meeting, though after discussions with diplomatic officials the police did effectively calm the situation.

The mob shouted hateful slogans, made unfounded accusations, and behaved threateningly towards the families of the disappeared. These protesters were not exercising their right to peaceful protest, but rather were disrupting a peaceful gathering of conflict survivors, including children. The strong impression was that the protesters were seeking to intimidate and silence those in attendance.

The United States strongly urges the Government of Sri Lanka to enforce the rule of law and permit all citizens to exercise their most basic human rights, including freedom of speech and freedom of assembly. We also call on the Government of Sri Lanka take all possible steps to ensure the safety of families who had traveled from the North to attend this meeting, both in Colombo and upon their return home.

◾Fourth civil society event stormed and disrupted since May
◾High-level US diplomat and representatives from other DPL missions in Colombo on the scene
◾Monk-led group claims activists gathering info from Maha Veer families to hurt GoSL
◾“I have seen firsthand the intimidation you face”: US Acting Deputy Head of Mission tells families

By Dharisha Bastians
The disruption of civil society events appeared to be a continuing trend with families of the disappeared from the north allegedly threatened by a mob led by Buddhist monks in Colombo yesterday, this time in full view of the diplomatic community.

Families of missing people from the Northern Province had gathered at the Centre for Society and Religion in Deans Road, Maradana yesterday, for a sharing of experiences that was by invitation only. A crowd of about 20 people stormed the meeting, the organisers said.

Several diplomats had also been invited to the event and happened to be in attendance during the disruption. This diplomatic group included the US Embassy Acting Deputy Head of Mission, Mike Honigstein and representatives from the UK, Switzerland and EU missions in Colombo.
Shouting angry slogans about NGOs sponsored by the US, the mob led by several young Buddhist monks walked into the meeting venue and snapped photographs of several activists and families present at the meeting, organisers told the Daily FT while the mobs were still present on the scene.

“You are living lavishly on the US dollars you earn,” the mob shouted at the activists and families.

“I have seen firsthand the intimidation you face as families of the disappeared,” Honigstein told missing people’s families as the meeting was disrupted. “I honour your courage to come forward and share your stories with us,” he said.

Security officials from the US Embassy and the EU mission arrived at the Centre in Maradana as the disruption continued.
Once the Police arrived, the mob continued to block the entrance of the premises, trapping civil society representatives, families of the missing and members of the diplomatic corps inside the building.

The disruption came only one hour after the event had commenced.

Police found it difficult to control or disperse the mobs but finally managed to get the crowd out of the venue where they continued to block the entrance.

Making a complaint to the Police regarding the missing people’s meeting in Maradana, the monk-led group claimed human rights activists Nimalka Fernando and Brito Fernando had gathered together ‘Maha veer’ families from the north and were in the process of gathering information to hurt the Government of Sri Lanka. In their Police complaint, the group said they had the right to disrupt any “anti-national” meeting held by “traitors”.
Last weekend angry mobs disrupted a training for Tamil journalists from the north at the Sri Lanka Press Institute, a US-funded program organised by the civil society group Rights Now for Democracy
FT