In the wake of Imran Khan’s visit, ACJU calls on the govt to protect the rights, identity and dignity of Sri Lankan Muslims 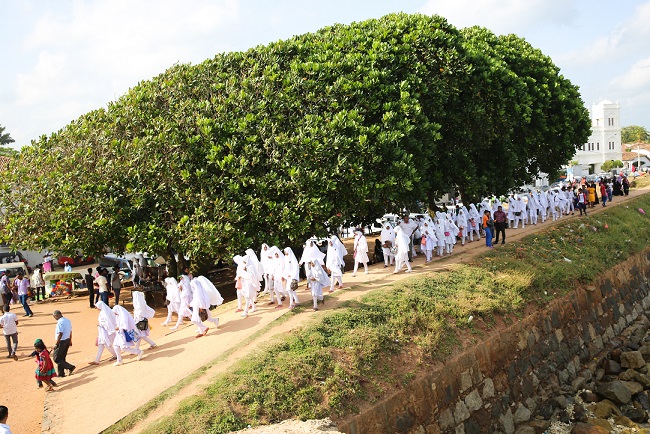 In the wake of the Pakistan Prime Minister’s visit to Sri Lanka the All Ceylon Jamiyyathul Ulama (ACJU), has called upon the government to ensure that the rights, identity and dignity of the Muslims are protected and that no injustice is caused to them and make sure that appropriate measures are taken in this regard. for the sincere safeguarding of the rights, identity and dignity of Sri Lankan Muslims.

It further appeals “to the authorities to take all necessary steps to reveal the culprits behind the Easter Sunday terrorist attacks and bring them before the law and ensure that those found guilty are punished according to law.”

The Sri Lankan Muslim community has a history of over a thousand years in this country, living as equal citizens and in harmony with other communities while at the same time fulfilling its duties to the Sri Lankan Nation.

History bears testimony to the fact that the Muslim community has at all times honoured and respected the sovereignty of the country and has conducted its affairs in a law-abiding manner.

While living in a country with people of diverse ethnic and religious backgrounds, Muslims in Sri Lanka have co-existed and continued to co-exist with those of other communities while preserving their unique religious and cultural values.

Institutes and systems such as masjids, Arabic madrasas, Qur’an madrasas/maktabs, ahadiya, Muslim personal laws, halal food consumption, etc., that are prevalent in this country have facilitated the Muslims to live as good citizens of this country while preserving their religious and cultural values. It is a well-known fact to those who are well-informed that these organisations do not pose any threat to national security or the social coexistence of the country.

The heinous Easter Sunday terrorist attacks carried out in 2019 by imposters claiming to be Muslims have been unreservedly condemned by the Muslim Community and its representative organisations and institutions. Terrorists must be punished. Terrorism must be eliminated. But innocent persons must not be harassed or incarcerated.

Muslim institutions which had served the community must not be made the scapegoats for the terrorist attacks. As a consequence of this attack, the Muslim community and its representative organisations and institutions have been unjustly portrayed and demonised causing the community to be viewed with suspicion resulting in irreparable harm to communal harmony.

In the context of the above, we would earnestly request the Government, its officials and the general public to take note of the following:

We wish to strongly urge all politicians as well as others to refrain from making false allegations and disseminating hate speech against the Muslim community in pursuance of political agendas. We further request politicians and others to refrain from indulging in hate campaigns against the Muslim community by spreading misinformation in respect of madrasas, Muslim personal laws, the burial of COVID-19 janazas (dead bodies) or any other rights enjoyed by the Muslims living in this country. We are of the view that those who are engaged in politics based on racism, shall never be able to guide this country towards prosperity.

The Muslims and other citizens of this country have suffered immensely due to the despicable activities of those who seek to drive a wedge between communities by creating suspicion about each other for political reasons. Such detrimental actions have the effect of undermining the unity and understanding prevailing among communities in this country that has been preserved for centuries.

We also wish to urge the media to refrain from providing a platform to evil forces who propagate anti-Muslim sentiments among the citizens and would also like to remind them that such behaviour and activities will pave the way for the destruction of unity prevalent among the communities in this country.

We earnestly request those who require clarifications and more understanding on the above-mentioned matters, to kindly read the publications of ACJU which clarify misconceptions on these matters comprehensively. If any further clarifications are required, we kindly request you contact our organisation, and we shall be to provide all possible assistance.

Furthermore, we wish to reiterate that the Muslim Community in Sri Lanka has always extended their cooperation to the Government in power. Thus, we appeal to the current Government and the relevant authorities to ensure that the rights, identity and dignity of the Muslims are protected and that no injustice is caused to them and make sure that appropriate measures are taken in this regard.

Further, we appeal to the authorities to take all necessary steps to reveal the culprits behind the Easter Sunday terrorist attacks and bring them before the law and ensure that those found guilty are punished according to law.