“You really feel like your country has betrayed you.”

Sonali Samarasinghe remembers the last words of her husband, Lasantha Wickrematunge, on the day in 2009 when he was killed: “Don’t worry, I got it under control.”

Threats weren’t new to Wickrematunge. As the editor of The Sunday Leader, a Sri Lankan newspaper that published articles exposing government corruption, he’d been followed, attacked with clubs and received a funeral wreath at his office.

Samarasinghe was the chief investigative journalist and consulting editor for the newspaper and she was also founding editor-in-chief of its sister paper, The Morning Leader.

Like other journalists, the couple worked in a difficult environment, as their newspapers competed with state-owned newsrooms and faced constant pressure for criticizing the government of then-president Mahinda Rajapaksa. In late 2008 and early 2009, Rajapaksa’s government was in the final months of a brutal decades-long civil war with Tamil Tiger rebels. Still, Wickrematunge’s assassination shocked the South Asian nation and would force Samarasinghe into years of exile.

“For the Mahinda Rajapaksa administration, [Wickrematunge] was the biggest thorn in their flesh,” Samarasinghe wrote in a blog post. “He investigated corrupt military procurement deals, spoke out strongly and passionately for a negotiated settlement to the ethnic conflict and debunked blatant government propaganda on the war.”

Indeed Wickrematunge’s first wife, Raine, was so fearful for her family’s safety she left Sri Lanka for Australia in 2002 with the couple’s three children.  Samarasinghe worked for Wickrematunge for years before the couple married in 2008, just two months before his death. 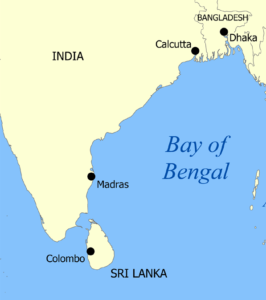 She too made powerful enemies. Samarasinghe was once interrogatedfor more than four hours by Sri Lanka’s Criminal Investigations Department in an attempt to get her to reveal her sources in an investigation into the central bank’s dealings with a company accusedof running a Ponzi scheme. In another incident, an article about tsunami relief accused Rajapaksa and other top officials of siphoning off millions in aid money. The Morning Leader’s printing presses were attacked and copies of the paper burned in 2007 by 15 gunmen after a separate exposé on the family of cabinet minister Mervyn Silva.

On Jan. 8, 2009, Samarasinghe and Wickrematunge received a call from the newspaper while returning home from the pharamacy. It was a warning:  they were being followed.

As they got out of their car, two men wearing black fatigues on a black motorcycle sped past them, staring them down, says Samarasinghe, in an interview with Global Journalist. The couple went into the house and closed all their doors. Samarasinghe says she tried to keep Wickrematunge at home,  but he was determined to go to the office to write his well-known political column.

On his way to the newspaper during rush hour, Wickrematunge was ambushed and killed in broad daylight by motorcycle-riding attackers, one of at least 19 journalists slain in Sri Lanka for their work since 1992, according to the Committee to Protect Journalists. Wickrematunge had been prepared for this outcome. He’d already written his own obituary, which included the line: “… when finally I am killed, it will be the government that kills me.” 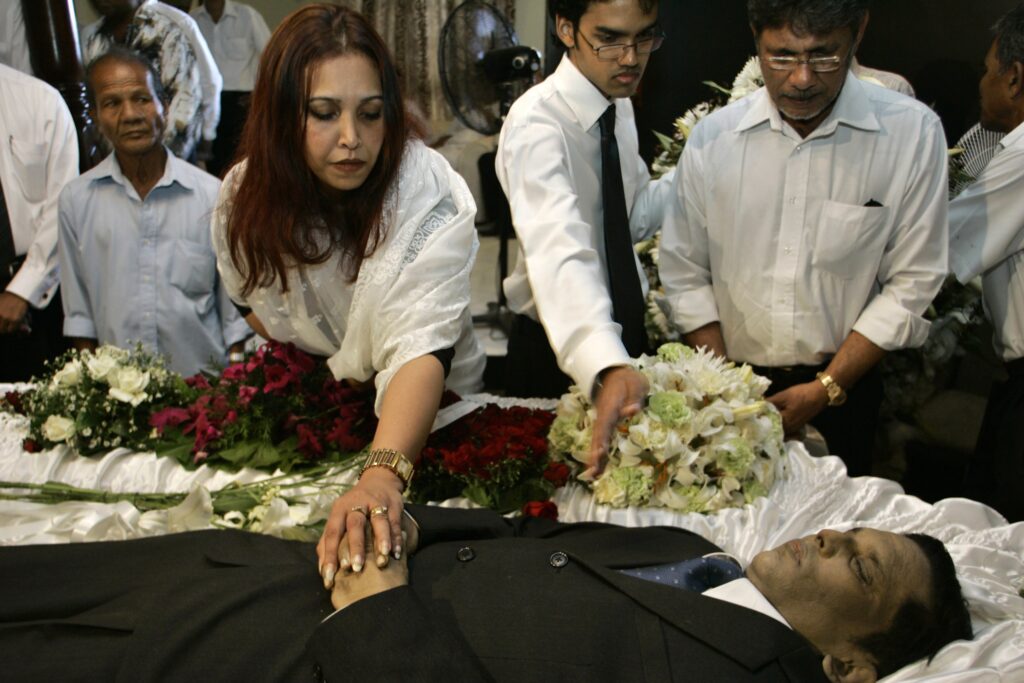 “We were up against an administration that had taken impunity to the level of a martial art,” Samarasinghe says.

She became a Nieman Fellow at Harvard University in August 2009, and started the independent Lanka Standardnews site in 2011. After Harvard, she spent time as a journalist in residence at City University of New York and Ithaca College.

Then in 2015 came an opportunity for justice. Rajapaksa, suffered a surprise defeat to former ally Maithripala Sirisena in presidential elections. The six-year old investigation into Wickrematunge’s death, which had yielded no convictions, was reopened. Samarasinghe was hired by the new administration to work in New York at Sri Lanka’s mission to the United Nations.

In 2016, a former soldier was found dead with an apparent suicide note in which he claimed responsibility for killing Wickrematunge’s. A police report implicated a special military unit led by Rajapaksa’s brother and defense secretary, Gotbaya Rajapaksa.

Yet progress stalled. Gotbaya, who is also being sued by Wickrematunge’s daughter in U.S. courts for her father’s death, has announced he’s running for president to succeed Sirisena in elections later this year. Both Rajapaksas have denied involvement in the editor’s death. Meanwhile, after a wave of terrorist bombings in April killed more than 250 people, President Sirisena said that investigations into human rights abuses during the Sri Lankan civil war had weakened the security forces and left the country at risk.

Samarasinghe spoke with Global Journalist’s Seth Bodine about the killing of her husband, the threats against her, and the prospect of those responsible escaping Sri Lankan justice. Below, an edited version of their interview:

Global Journalist: What was it like being a journalist in Sri Lanka around the time of your husband’s death?

Samarasinghe: We were up against an administration that had taken impunity to the level of a martial art.[It] had incrementally closed the democratic space, the space for freedom of expression. This didn’t happen overnight. It happened incrementally.

…One by one private media organizations were being bought by businessmen or acolytes of the president at the time [Mahinda Rajapaksa]. Even his own family.

Those who were not bought up chose to associate themselves with the ruling regime because then they could engage in lucrative business with the government. The state-controlled media was really state-controlled. It included the nation’s largest newspaper group. So, you could not compete with that.

At the time, when we were working, there was no freedom of information act. Speaking to journalists was actively discouraged by the government.

Even though the constitution provided for freedom of expression, that freedom of expression right was infringed upon by other laws.  With emergency [power] regulations, anything could happen. There was the Prevention of Terrorism Act, which was another draconian piece of legislation which really curtailed freedom. And there were other laws, giving the government and the armed forces power to arrest without warrant.

So you could be detained at that time for up to 20 months without charge. Officials were shielded from prosecution so you couldn’t even challenge them.

The culture of impunity was just staggering. I mean, at that time white vans would go around abducting journalists and activists. Some of them never to be seen again, some of them beaten to a pulp and thrown on the side of the road.

GJ: Was there any warning of the danger to you and Lasantha?

Samarasinghe: We weren’t given any warning about the motorcyclists except a few minutes before when someone from the office called [to say] that he was being followed. But before that, there were certain things that were happening.

For instance, he received a cutting of a newspaper which was drenched in red ink. This was like a week before. He himself knew. He was talking to me, and he said, “It’s very dangerous now.”

Then [two days before Wickrematunge’s death], a very independent TV network was destroyed. They came in and they burned the place down.

GJ: What led you to flee?

Samarasinghe: It was the trauma of going through the death of [my] husband in such a violent manner. Then, neighbors let us know that the motorcyclists had come back and were circling the premises.

So I immediately left my home. My mother didn’t know where I was, I didn’t tell anyone where I was, and I stayed with a friend.

Meanwhile things were happening at home. Two men walked into the house, and despite my mother’s protest, they very aggressively started taking photos of the inside and outside of my home. They photographed my little niece. Then they rushed out of the house. So, within two weeks I realized I had to leave.

Both the Australian and American ambassadors reached out to help. And ultimately, I fled to Europe and found shelter in the home of a European ambassador who took me in for two months. 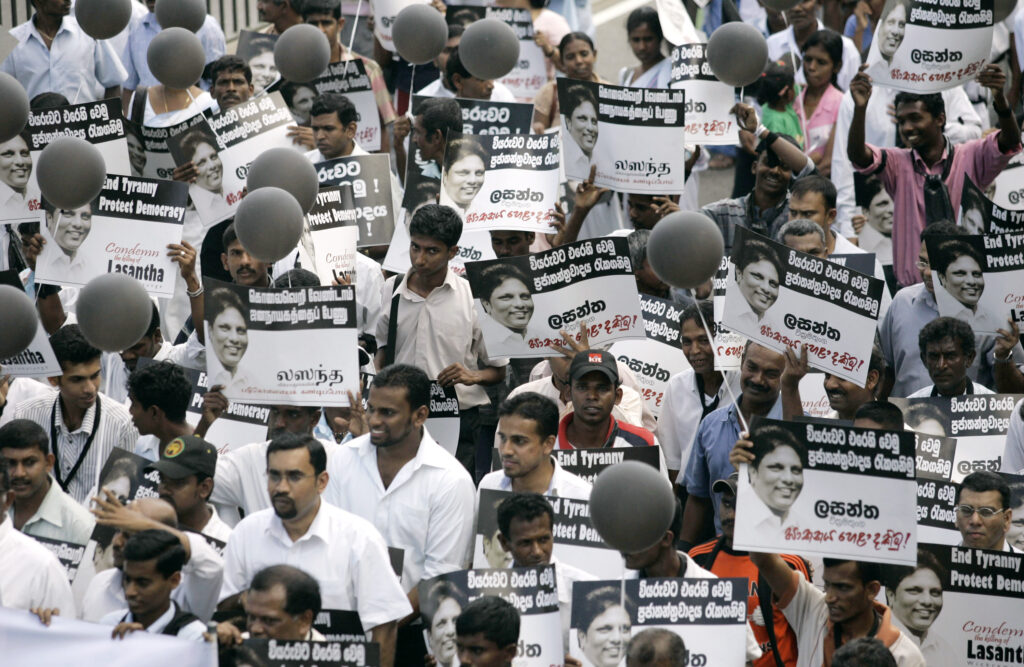 GJ: What happened at The Sunday Leader after Lasantha’s death?

Samarasinghe: For the two weeks I was in charge of the newspaper following the assassination of my husband, I wrote the political column focusing on [Wickrematunge’s death], the then-president’s reaction, and the immediate aftermath. I also had other journalists intensely focus on the investigation.

We ran half page ads on a black background of threats made by [President Rajapaksa] to Lasantha. However I was compelled to flee the country. The newspaper ground to a halt and understandably diluted itself and went into survival mode.

GJ: How did you feel when you left?

Samarasinghe: You really feel like your country has betrayed you. And you also have to face so many emotions. Those who knew Lasantha just denied knowing him. Everyone was scared. It was such a horrid time.

[Some] of my friends and family would no longer ride in the same car with me because I had to drive to work in those two weeks, fearing that they would be collateral damage…that I would be the next obvious target. For a long time, my house, I couldn’t even convince a caretaker or friend to check in on it because they were just scared people were watching it, or that they could be attacked or targeted.

Superstition was doing its bit. Nobody wanted to rent or buy a home they felt was one of tragedy – because it was a home of a couple whose dreams were dashed within two months of marriage. So they thought it was bad luck.

All these things, all of these cultural and political issues were just swirling around. It was a really torrid time because of that.

It was just the panic of having to leave, and having to look undefeated for the cameras because you have to look strong. The panic of not seeing familiar faces, the stress of coming to an unknown place.

Language had failed me. And I was a journalist who wrote 10,000 words or more a week. It was then that I learned and was relieved to know that it was PTSD [post-traumatic stress disorder].

GJ: Before Rajapaksa surprisingly lost the 2015 election, did you imagine that you would ever go back to Sri Lanka?

Samarasinghe: I had just abandoned all hope of getting back to Sri Lanka. I thought this was going to go on forever. In 2015, [before the election] even the New York Times had an editorial that said the regime is going to remain. None of us expected this to happen. The next day, we all bought tickets to go back to Sri Lanka. Everyone was buying tickets. 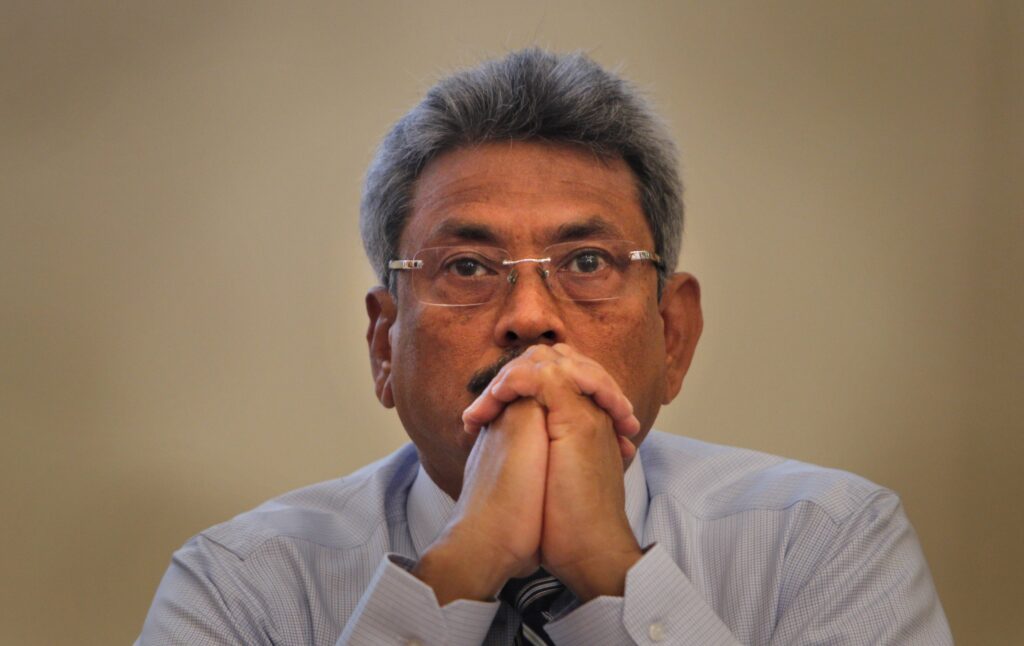 GJ: Former defense minister Gotabaya Rajapaksa was linked to your husband’s death in a police report. Now he’s running for president of Sri Lanka.  Are you upset that the people responsible for his death are still free?

Samarasinghe: Investigations into Lasantha’s murder are still continuing. It is not for me to comment at this time. The people of Sri Lanka will decide in democratically-held elections.

I will say this: I believe in the rule of law and I believe in divine justice. As Dr. King noted: “Evil may so shape events that Caesar will occupy a palace and Christ a cross, but that same Christ will rise up and split history into A.D. and B.C., so that even the life of Caesar must be dated by his name…the arc of the moral universe is long, but it bends toward justice.”