Prof.GL Peiris is Economic with Truth About Economic Growth In The North 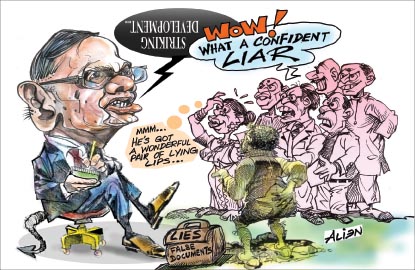 by Dr.Muttukrishna Sarvanantha
Before the meeting with the Secretary of State Hilary Clinton on May 18, 2012, Foreign Minister G. L. Peiris made some remarks which included the following.  “The most striking developments have really been in the northern province of Sri Lanka where the economy is growing by as much as 22 percent in comparison with the average for the rest of the island, which is about 8 percent. Now this is the result of an emphasis on the development of infrastructure to a degree that is really without (inaudible) at any other time in the island’s history.”

The national Gross Domestic Product in REAL TERMS (i.e. at constant prices) grew by just 8.0% in 2010. The rise in the rate of the consumer price index (aka inflation) accounts for the difference between the nominal growth rate and the real growth rate. That is, the rate of inflation is subtracted from the nominal growth rate to arrive at the real growth rate of the economy (either at the national or provincial level). As I mentioned before, since provincial consumer price indices are unavailable, PGDP has always been reported in nominal terms.

Therefore, it is deceitful of G.L. Peiris to quote the northern provincial economic growth rate at current prices (i.e. in nominal terms-23%) and compare it with the real growth rate of the national economy (8% at constant prices). The Foreign Minister G.L. Peiris should certainly know the difference between ‘current prices’ and ‘constant prices’ because he was the Deputy Finance Minster under President Chandrika Bandaranaike Kumaratunga’s first-term in office (i.e. between 1994 and 2000).

Secondly, there is nothing surprising about the 23% growth of the northern economy in nominal terms because of the low base of the northern economy in 2009 due to obvious reason/s. Moreover, in any post-war situation economic growth surges in the first few years in former conflict-affected region/s because of the re-opening of the roads and other transport networks, return and resettlement of the internally dispersed persons, and the restoration of the commodity markets thereby fulfilling the pent-up demand of the population living in conflict-affected areas. During the time of the ceasefire also the northern economy posted the highest provincial growth rate.

According to Seneka Abeyratne and Rajith Lakshman, during the period 2002-2004 the Northern Province posted the highest provincial economic growth among all the provinces in the country. (“Impact of the Ceasefire Agreement on Regional Economic Growth in Sri Lanka”, July 2005, Colombo: Secretariat for Coordinating the Peace Process.

Thirdly, and more importantly, more than half of the northern provincial economy was accounted by “Government Services” in 2009 which was referred to as “Public Administration, Other Government Services, and Defence” until 2007. The latest decomposition of the provincial GDP data is available for the year 2009. In fact, the share of Public Administration, Other Government Services, and Defence in the northern economy has increased from 38% in 2003, to 49% in 2006, 2007 & 2008, and further to 53% in 2009.

In the national economy, the Government Services sub-sector accounted for only 9% of the GDP in 2009. (Central Bank of Sri Lanka, Economic and Social Statistics of Sri Lanka, various years) The foregoing data do not corroborate with the claim by G. L. Peiris that the high growth rate in the northern economy “…. is the result of an emphasis on the development of infrastructure to a degree that is really without (inaudible) at any other time in the island’s history.” Instead, the highest provincial growth rate in the Northern Province in 2010 was achieved by spending on public administration and the armed forces. However, it is likely that the share of the foregoing sub-sector in the northern provincial economy would have declined in 2010 and 2011 due to the increasing contribution of other sub-sectors such as construction, fishing, crop agriculture, etc. although the data is still unavailable.

Furthermore, according to the latest Household Income and Expenditure Survey (HIES) undertaken by the Department of Census and Statistics between July 2009 and June 2010, the Northern Province had the lowest average household income and the lowest per capita income among all the nine provinces in the country. (Department of Census and Statistics, Household Income and Expenditure Survey 2009/10 Final Report, pp7&11) It should be noted that HIES 2009/10 did not cover three districts of the Northern Province, viz. Kilinochchi, Mannar, and Mullaitivu (and perhaps Vavuniya North DS division).

The foregoing data are hardly comforting for a province emerging out of a protracted civil war. It is also important to note that we should not draw hasty conclusions from the 2009 and 2010 data, which were premature. Nonetheless, international misinterpretation or twisting of statistical data by an Emeritus Professor of Law and former Deputy Minister of Finance should not and cannot be condoned.