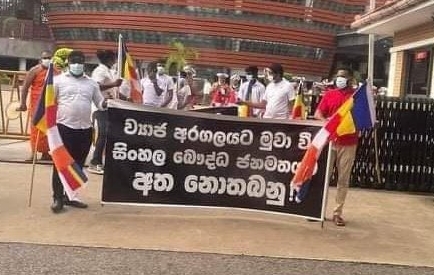 Upul Sannasgala, a former tuition teacher,  has been a strong supporter of the #GoHomeGota protest campaign launched by the younger generation of Sri Lanka.

Dan Priyasad made those threats while leading a pro government Buddhist monks march against the #GoHomeGota protest campaign.

Dan Priyasad speaking to the monks said in a threatening voice  “if Sannasgala comes close to the Kelani Buddhist Temple [ I would] stop his bypassed heart and dump it in the Kelani River”.

Threatening #GoHomeGota protestors Dan Priyasad said that  “Once the [protest] wave is over wait and see what will happened to you. We have already collected your names.”
No action has been taken by the police against the hate mongering speech by Dan Priyasad.

“We have collected the details of all engaging in protests. Severe actions to follow. Be careful” pic.twitter.com/YZBWY2mpM7