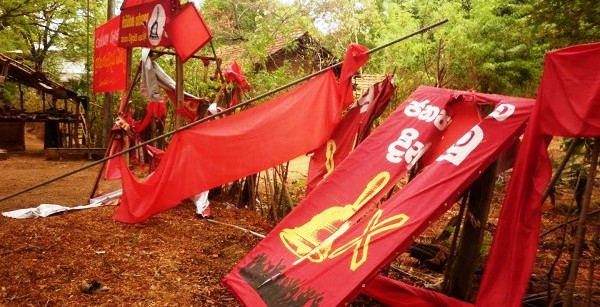 [One of the 14 JVP election offcies destroyed; Lanka Truth photo]

Election campaign of the Janatha Vimukthi Peramuna (JVP) in the upcoming Uva Provincial Election is being targeted by the pro government gangs in an unprecedented manner.

Within 48 hours over the last week end 14 election offices of the JVP were destroyed and set on fire by the Pro Government gangs, says the JVP.

SLB reproduce the statement issued by the JVP below:

“We express our disgust and condemnation regarding the attacks carried out by the government that is at the threshold of an election defeat.

During the past 48 hours 14 legally put up election offices of the JVP candidates for the Uva PC election have been attacked by thugs. The gangs of thugs that have attacked the offices have destroyed decorations and have set fire to them.

The well planned attacks carried out by the government, which is at the threshold of defeat, to sabotage the programme of the JVP that makes the people aware of the anti-social and undemocratic administration of the government should be condemned with disgust.

The JVP calls upon the people in this country, specially the masses in the Uva province, not to be intimidated by the sordid acts of the government but to come forward to defeat the violent, illegal politics of the cowardly government.”

The offices that were attacked are:

1. The office at JVP candidate Anura Kumara at Dambagalla Junction at Madulla

2. The election office at Burutha Junction at Buttala

3. The election office at the residence of Comrade P.P. Wijesiri in Monaragala town

6. The election office at the residence of the candidate and Member of Pradeshiya Sabha