Privatization of university education for the benifit of 2% super rich What’s next to sell?

A massive protest was organised by the Medical Faculty Students’ Union of the Colombo Medical College, in front of the Faculty last week, against the intake of unqualified local and foreign students into local universities for the academic year 2011/2012, for LKR 7.5 million per head. The second appeal to the Government was to withdraw the students of the Kothalawala Defence Academy which is run under the Ministry of Defence and in the process of privatisation, from hospitals attached to local universities which are maintained under the Ministry of Higher Education, when receiving clinical training.
The latest ploy of the government in privatisation of education is selling government university degrees to both unqualified local and foreign students. For this year the UGC (University Grants Commission) has laid the groundwork to facilitate 42 students with insufficient qualifications in Government medical faculties. The minimum academic requirement made public is a mere 3 ‘S’ passes either through local A/L or the London A/L routes, which is again an incoherent and ridiculous action to take.
The bottom line of 3 ‘S’ passes was set since the inception of the PMC concept in Sri Lanka and it has a strong economical basis from a business point of view. A student entering the PMC has to pay monthly LKR 100,000 on an average. How many parents in Sri Lanka can afford such a huge investment for the education of one child? It is merely 1 to 2 per cent of the population according to the data from the Central Bank. When it comes to the said percentage, out of the students who obtained at least 3 ‘C’ passes from those who have opted for the Biology stream in Local A/Ls, it is absolutely not a sufficient number of prospective students, for a business venture. This fact itself projects the sorry state of the future image of Sri Lankan education.

In keeping with continuous Government strategy failures, the current protocol which has been set in motion by the Government reflects a failed strategy and weak efforts of showing off a flash in the pan. A failing Government possesses classic features such as a wide information gap among politicians about the type of services to provide, unnecessary and silly political interference especially taking cognizance of the short term view rather than considering long term effects, sky-high administrative cost of Government bureaucracy in public services and lack of incentives leading to inefficiency and due to overstaffing. All of the above key features are clearly evident in our present scenario. The next move to save the current crisis is to decide the next item to sell and to fix the next auction date. So what is left to sell for tomorrow? It is prudent to ponder a wee bit more than yesterday. 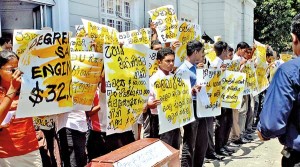 The Government has backed the insidious scholarships given to prospective students from the Malabe PMC (Private Medical College), reinforcing privatisation of medical education while saying that there won’t be enough available admissions for those who have obtained 3 ‘A’ passes in the Biology stream in Sri Lanka, which invariably is an irrational statement even an Advanced Level (A/L) student can understand, though our political rulers cannot comprehend. Instead, the responsible parties can easily afford to accommodate a student at a Government Medical Faculty for less than LKR 1.5 million, if there are hardly any students left with 3 ‘A’ passes, in spite of wasting colossal amounts, through Government banks.

At the moment the quota of the foreign and local students from different routes who are allowed to study at Government universities has been increased up to 5% per year, from 0.5%, where it was exclusively for foreign students during the previous years. Still the majority of local A/L students are given the opportunity. But, the moment for the percentage to turn around is not far away as of now, as we are passing a dynamic totalitarian rule. When it happens, the victims would not be the minority who are capable of affording a sum of several million rupees over one’s education per year, but the children of parents who strove hard to win 2/3rds majority to the present rulers.