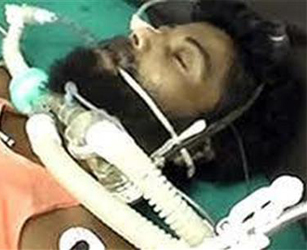 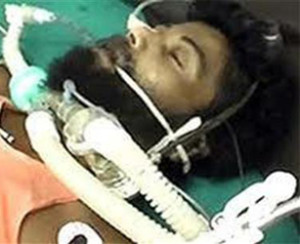 A Tamil inmate is reportedly in a coma situation now following a severe beating that had taken place in the Galle Prison.
It is 34 year old Sathis Kumar who is now in a coma following the incident. He is the father of a 10 year old girl. He was arrested by the army in 2008 from his residence in Kodikamam and was later handed over to the police. Since his arrest, he had not been indicted and had been held in the Magazine Prison in Colombo. He was transferred to the Galle Prison from the Magazine Prison last August 21st.
Sathiswaran’s wife, Kavitha and 10 year old daughter Sahithya have visited the Magazine Prison recently and they had been informed that Sathis Kumar had been transferred to the Galle Prison. When she had visited the Galle Priosn, she was informed that her husband was in a coma and being treated at the Karapitiya Hospital.

Meanwhile, officials at the Galle Prison have tried to get Kavitha to sign a document that was written in Sinhala. She has however refused to sign the document.

The security forces recently severely assaulted a group of Tamil inmates in the Vavuniya Prison resulting in the death of two inmates, Nimalaruban and Dilrukshan.
-srilankaxnews