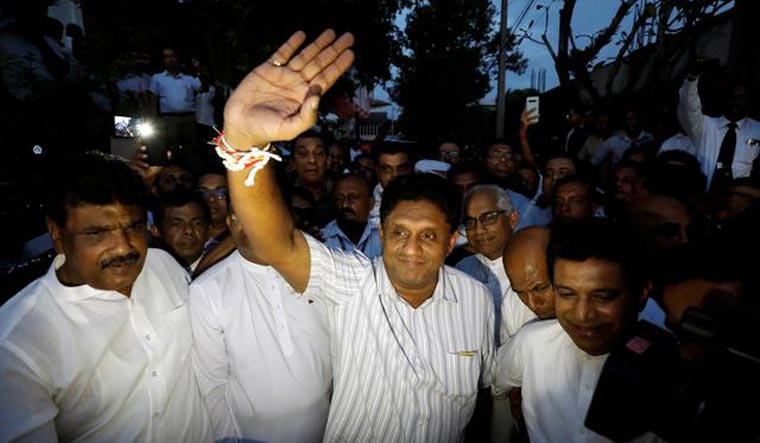 Image: Sajith Premadasa must get at least 75% of the Tamil vote to have a chance of winning.

Only about three weeks remain before Sri Lankans go to the polls to elect a new president. The fight is between SLPP’s Gotabaya Rajapaksa and UNP’s Sajith Premadasa. JVP’s Anura Kumara Dissanayaka is likely to come a distant third. The other minor candidates are unlikely to make much of an impression on the result.

Private polls that the SLPP and the UNP conduct periodically must be giving the two respective campaigns a fairly accurate picture of where Gotabaya and Sajith stand in the race. It is very likely that there are still enough voters who are “undecided” to deny, at this point in time, the two main candidates the 50% plus one vote that is needed to win the election.

Assuming that the November 16th poll will be around 12.5m (78% of the registered voters) the winner must get about 6.25m to win.

The SLPP polled 5.0m votes (40.5% of the total poll) in the local government elections in February 2018. That base is very likely to remain steadfast for Gotabaya. UNP polled 3.6m (29%) in the same election and form the base vote for Sajith. If he secures the minority vote at the same level as Sirisena did in 2015, he will have an additional 1.5m votes making a total of 5.1m.

Since the commencement of the campaign the two candidates have been trying to build on their respective bases to reach the 6.25m (50%) threshold.

The SLPP claims that the SLFP (UPFA) vote of 1.5m (12.1%) the latter polled in February 2018 can be added to the SLPP vote of 5.0m to give them 6.5m (52%) to make Gotabaya an easy winner. Gotabaya can afford to lose about 250,000 of the 1.5m SLFP votes and still win. He also has a cushion of about 250,000 “new” votes that will come from minority voters in the plantation areas and the north and east. For the above reasons the SLPP claim that Gotabaya has the distinct advantage at this point in time appears to be convincing.

Five Tamil parties in the north presented 13 demands to the presidential candidates as conditions to give their support in the election. To most Sinhalese, and that includes many who recognize that Tamils have genuine grievances that must be addressed, most of the demands appear unreasonable if not outrageous. Gotabaya’s strength among the Sinhalese voters is such that he can afford to outright reject the demands and largely forego the Tamil vote. In fact he could exploit the demands to gain more votes from the south and some of his surrogates have already started such a campaign.

Sajith Premadasa, in outmaneuvering the UNP establishment to win the party’s candidacy, has established his credentials as a good strategist and fighter in electoral politics. He is unlikely to give up without a good fight.

The Tamil parties have made Sajith’s position quite difficult. He must get at least 75% of the Tamil vote to have a chance of winning. But he also must not say or do anything that will alienate his Sinhalese voter base.

Sajith is a populist candidate that is attractive to some of the 1.5m SLFP voters. It is hard to estimate how many SLFP votes he can be sure of on his own accord.

If Sajith is able to persuade President Maithripala Sirisena to come off his current “neutral” position and request SLFP voters to support him, the contest will almost instantly become more even and intense.

Given the maxim that in politics there are no permanent friends but only permanent interests, there are some compelling reasons for Sirisena to consider such a course of action. He can appeal to SLFP voters to vote not for the UNP but for Sajith Premadasa the candidate who happens to represent the New Democratic Front (NDF). If Sajith wins, Sirisena saves the SLFP from extinction (or a take over by the Rajapaksas) and also secures the leadership of the party. Instead of going down in history as the man who destroyed the SLFP he will go down as the one who saved it.

Many SLFP MPs and organizers will be happy that the prospect of getting nomination for the next parliamentary elections and winning a seat would greatly improve if they contest under the SLFP banner rather than under the SLPP banner.

More broadly, given the fear that many have expressed that a future Gotabaya led government could pose a serious threat to democracy, Sirisena can justifiably claim that he saved the country from that peril not once but twice, once in 2015 and again in 2019. Many of his critics will also be willing to pardon him for the serious indiscretion that he committed in October 2018 trying to throw out his rival Ranil Wickremesinghe.

If Sajith Premadasa is able to convince Sirisena to lend his support to him and also gets the backing of the former president Chandrika Kumaratunga, Gotabhaya’s grip on the 1.5m SLFP vote bank will loosen.

In 2015 Anura Kumara Dissanayaka (AKD) and JVP played a decisive role in Sirisena’s win. If Anura Kumara had contested in 2015 and polled about 450,000 (3.7%) of the votes that went to Sirisena, Mahinda Rajapaksa would have won the presidency.

AKD and JVP are justifiably disappointed at the corruption of the UNF government and its other shortcomings. In the current campaign they mercilessly criticize both the UNP as well as the SLPP, and justifiably so.

AKD would have been under intense pressure from the party’s grassroots to contest for the presidency. He may have sincerely believed when he handed over his nomination papers that he had a reasonable chance of winning the presidency in a three-cornered fight. He starts with a base of about 700,000 votes that the JVP polled in the February 2018 local government elections. Assuming that all three main contestants get roughly equal shares, to win he would have had to increase it about six-fold to 4.2 million. By now it should be clear to him that it is not a goal that can be reached. He has reasonable prospects of polling about 1.0m votes.

It is also obvious that AKD and JVP are actually helping to ensure the victory of Gotabaya Rajapaksa and SLPP. It is likely that a larger proportion of the JVP votes will go to Sajith if AKD withdraws from the race.

In theory, those who vote for the JVP can also mark a second preference. Many true believers of “Yahapalanaya” now supporting AKD may mark it for Sajith who they think is the lesser of the two evils. But in practice it is unlikely to make a meaningful difference to the result.

The second vote will make a real difference to the final result only if the gap between the top two candidates is relatively close. For example, suppose Gotabhaya wins 47% in the first count, Sajith 43% and AKD 10%. Suppose there are no second preferences marked on AKD’s votes (10%) for Gotabaya but 3.9% (39 AKD voters out of every one hundred) have marked a second preference for Sajith. That will increase the vote of the latter from 43% to 46.9% but still make Gotabhaya the winner.

If AKD and JVP see no significant difference between Gotabaya and Sajith as president of Sri Lanka, they will be indifferent to the result of the election. However, if the JVP sees Sajith as the safer candidate to usher in a clean government that also protects democracy and helps the poor, they have the option of reaching some understanding with him that will allow AKD to withdraw his candidacy in favor of Sajith.

Such a move appears very unlikely but cannot be entirely ruled out. It may be politically more palatable and feasible for the JVP to withdraw if other significant third party candidates such as Mahesh Senanayaka also agree to do the same and reach a grand compact with JVP and Sajith.

It is obvious that Sajith will gain the most and Gotabhaya will lose the most if AKD withdraws from the race.

The results for the JVP are likely to be mixed and harder to predict. On the one hand, AKD is taking a massive risk by provoking the ire of some members of his party who won’t approve the idea of withdrawing from the race to support Sajith, who is from JVP’s arch political enemy UNP.

On the other, some will see AKD as the bold leader who put his political career in serious jeopardy for the sake of democracy and good governance. Such a perspective can gain credence if the JVP can secure an ironclad guarantee from Sajith that he would have zero tolerance for bribe takers and corrupt practices under his leadership, especially in the new government that would be formed after the next parliamentary election. If Sajith breaks his promises the way that the Yaha Paalanaya Government did, JVP gets a golden opportunity to tell the Sri Lankan voters that they (JVP) alone stand for clean government. The chances are very good that a vast number who hitherto never supported or voted for the JVP would turn to them as saviors of the nation.

The current JVP leadership is still relatively young. They are an energetic group that is well educated and have a reputation for integrity. But they are also getting on in age. In opposition all they can do is criticize. Even with ten or so MPs in the next parliament they won’t have much of an impact on the lives of people. If they join some form of “national” government under Sajith and agree to take cabinet appointments they could use their talent and commitment to serve the nation and especially the downtrodden for whom they claim to speak. They were in government (2004-05) under the Kumaratunga administration but that was not much of a success. Perhaps they can draw lessons from that experience and do much better if they decide to seek a second chance this time.