Presidential Election: Desire For Change & The Hope For Democracy’s Survival

by Jayadeva Uyangoda–
Less than two weeks more to the Presidential election, scheduled for January 08, 2015, the political temperature of the country is rising amidst incessant rain and unusually cold December weather. The signs are that violence may increase, for the simple reason that the stakes are quite high at this election.

At present, there is a discernible political trend in urban areas in favour of the opposition coalition and its Presidential candidate. This trend may or may not survive against the UPFA’s aggressive and resourceful propaganda campaign. However, two themes seem to have deeply penetrated into the political consciousness of the people across ethnic, social, and regional differences. The first is the desire for regime change, often articulated in two expressions: “these people have been in power for far too long,” and “it is time for change, isn’t it.” Besides the syndrome of regime fatigue, these expressions show a shared and powerful critique of the style of governance which President Rajapaksa promoted after 2009. The second is the deep resentment of rampant corruption and unchecked abuse of power, which many people consider as the most negative feature of the UPFA regime during the past few years. However, the government seems to be rather oblivious to these public perceptions.

The election campaign as it has unfolded so far, also shows that the opposition has won the battle for public attention in terms of ideas, at least for the moment. President Rajapaksa’s propaganda campaign seems to have suffered a setback because of its lack of new ideas that can appeal to the political imagination of the masses. His key campaign theme of regime continuity for further economic and infrastructure development, political stability, consolidating a strong state, and personal gratitude for winning the war against the LTTE does not seem to have led to much public excitement. The old and cerebral slogans so far deployed in the UPFA campaign show that President Rajapaksa and his camp are running short of new political ideas that can move the electorate, or even simply help retain its voter base. Meanwhile, what largely remains as the greatest electoral strength of President Rajapaksa is his personal appeal to the largely Sinhalese electorate. It is still not clear whether the opposition campaign has made any significant inroads into President Rajapaksa’s core constituency of the rural Sinhalese voters.

While the UPFA coalition has begun to disintegrate, its links with some major social constituencies, particularly in the urban areas and among the minorities, have also become fragile. This has created a condition of vulnerability for the UPFA regime. The increasing aptitude for violence demonstrated by the UPFA’s campaign troopers is an indication of a desperate reaction to this apparent crisis of the regime as well as of the Presidential election campaign.

While the election campaign is progressing, some of the central themes of the opposition campaign are also getting greater political legitimacy and public attention. ‘A regime change for political change’ is the key thematic slogan of Maithripala Sirisena-UNP-JHU campaign. The government’s continuing display of its willingness to abuse state power and resources for partisan gains, the unmitigated sense of arrogance some of its leaders continue to demonstrate in public, and their contempt for the rules and norms of democratic political conduct are the ideal behaviour that any opposition candidate can expect from a ruling party during an election campaign. It is probably too late now for the UPFA government to alter its strategy which willy-nilly is helping its opponents. Thus, the election campaign can only become more and more aggressive.

“Change or no change” is the key theme in this Presidential election. And a change is necessary, not just to bring Maithripala Sirisena and the disparate coalition of his new political friends into power. A regime change is necessary for the survival of Sri Lanka’s democracy. If there is no regime change, a change of the style of governance by the present incumbent is crucial for democracy’s survival.

As I see it, a regime change is necessary for Sri Lanka today to re-establish the fundamental democratic principle that a regime and the state are not one, but two distinct entities that should never be fused into one. The greatest setback that Sri Lanka’s democracy has suffered, particularly during President Rajapaksa’s second term, is his inclination to erase the distinction between himself as the President, his UPFA regime and the Sri Lanka state.

Indeed, the identification of the individual ruler sitting at the top with the regime and the state under his tight control is the most decisive blow which Sri Lanka’s democracy received under the post-18th Amendment constitutional order of Sri Lanka. Unless this process is stalled decisively, Sri Lanka’s democracy might unfortunately require a bloodbath for its regeneration, as it has happened in many other countries. That is why a peaceful transfer of power to a new regime after the Presidential election on January 08 is so crucially important for Sri Lanka’s democracy. That is also why I would vote for Maithripala Sirisena, despite many reservations I have with his coalition and its policy manifesto.

Since 1977, Sri Lanka’s democracy has suffered enough under a strong government led by a stronger leader. Citizens of Sri Lanka now need a political breathing space under a new ruler, a new regime that will re-conceptualize the notions of a ‘strong leader’ and ‘strong state’ in terms of democracy, accountability, humility, modesty, and humane governance. At least the rhetoric of the opposition campaign carries this message. Democracy, backed by checks and balances and rule of law, is not a source of weakening the state, as some appear to propagate. Rather, it is deviations from democracy that weaken the state, undermines its authority and legitimacy.

A new regime should also totally abandon the strategy of inducement to corruption, and the ever willingness

to use intimidation and fear as political weapons. If these ever were characteristics of a strong government or

a strong ruler, they were indeed tactics of power advocated centuries ago, famously by Kautilya and Machiavelli,

for pre-modern, pre-democratic, and autocratic rulers whose sole goal in life was maintaining power in its most

Actually, the notions of strong state and strong government, which have evolved in Sri Lanka since 1977 and gained a new momentum during the past few years are both pre and anti-democratic. They should be totally abandoned by Maithripala Sirisena as well as Mahinda Rajapaksa. They should be replaced by an alternative and democratic notion of a strong ruler, a strong government, and a strong state. It should be a state and a regime strong in their democratic commitments, the democratic character, and democratic resources. In the new concept, democracy, human rights, checks and balances, rule of law, and institutional autonomy of the judiciary, the police and the armed forces, and other institutions of supervision and accountability should constitute the elementary principles of governance. They should not be made subservient to the visions for personal glory of the ruler. This is a fundamental lesson which Messrs Rajapaksa and Sirisena should learn from Sri Lanka’s recent political history.

Despite many shortcomings of Maithripala Sirisena’s campaign and the policy manifesto, its basic merit is that it has re-introduced to Sri Lanka’s political debate an approach to politics, political power, and the qualities of the ruler, which is an alternative to the one practiced by the current UPFA regime. It promises a crucial shift in the style of the ruler as well as the style of governance. At a time when there are no fundamental policy differences between the ruling party and the opposition, distinctions in personality and the styles of governance do matter a great deal in making political choices.

If the opposition candidate wins, the new coalition regime might or might not carry out its promise of re-democratization. As the experience shows, opposition parties are usually better democrats when they are seeking power. This is a risk inherent in the politics of regime change and the democratic forces and voters should be aware of it. Despite those limitations, a regime change in the present moment of Sri Lanka’s politics will re-open and broaden the space for the social struggle for democratization. That struggle will have to continue even despite, and after, a regime change, and perhaps against the same regime that we as voters might want to bring into power. That is why politics in post-civil war Sri Lanka has become an unending and permanent struggle for democracy.

If a regime change happens in January, it is most likely to be a turning point for the betterment of Sri Lanka’s political change. It will regenerate the idea that political power is a temporary responsibility that should be exercised with humility, and not as a personal endowment or a tool for individual glory. That is also why I want to vote for a democratic regime change. 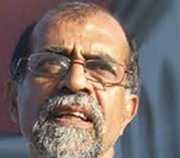