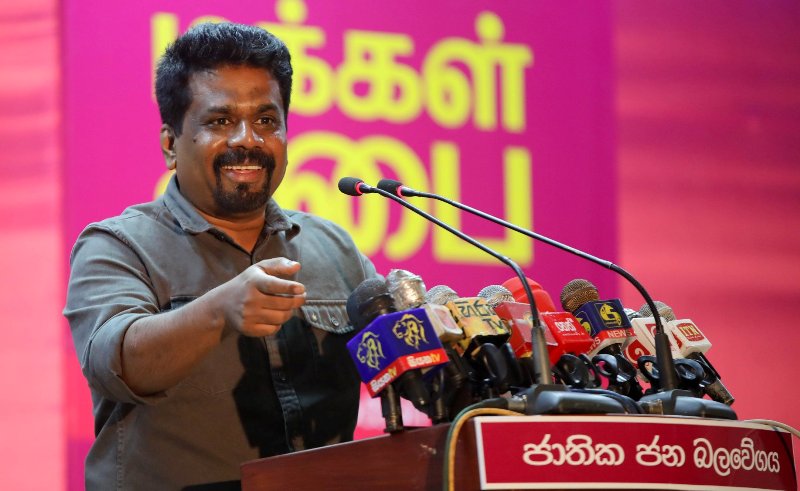 “We have now sunk to a depth at which the restatement of the obvious is the first duty of intelligent men.” George Orwell. (The Adelphi – January 1939)

“The first duty of the Memory Police was to ensure disappearances,” writes Japanese author Yoko Ogawa in her tale of an island where things disappear, and disappeared things cease to have any meaning. We can become that island, if we give full rein to our dashed hopes. If Gotabaya Rajapaksa coasts to victory on the tide of our despair, our freedoms will disappear from reality and from memory. Accustomed to our subject-hood, we will forget that we were once citizens who had the right to hold a mirror before our leaders and call them by the names they have earned.

It’s a popular fairy tale trope: the hero kills the monster and claims his reward, a lifetime of happiness with the imprisoned princess.

In January 2010, the ITN held a musical show titled ‘Jaya Jayawe’ (Victory! Victory!). The show opened with a lullaby retelling the ‘heroic saga’ of ‘King Mihindu’ and ‘Chief General Gotabhaya’ who defeated the ‘demons’ threatening the motherland. It ended with a song praising the mother of Mahinda and Gotabaya Rajapaksa.

A political fairy tale with a happy-ever-after ending was what the Rajapaksas claimed for themselves, post-war. They had defeated the Tiger. Now, Sri Lanka was theirs forevermore, to do with as they wish – or so they believed.

That dream of transforming Sri Lanka from a messy democracy into a familial fief was interrupted in 2015. A singular political coalition took on and defeated the Rajapaksas.

The crimes, errors and idiocies of the Sirisena-Wickremesinghe administration had turned what should have been a full stop into an ellipsis. Today, the Rajapaksas are back to reclaim the absolute power they deem to be theirs by right of conquest.

In 2010 and even in 2015, the Rajapaksas made some attempt to camouflage the true nature of their project. This time, the aim of grabbing political and national power for the exclusive use of the family is displayed unadorned. Brother has succeeded brother.

The SLPP is the only political party in the history of Ceylon/Sri Lanka that was formed to serve as a vehicle for the political project of a single family. It is quintessentially a Rajapaksa party, with brothers, uncles, sons and nephews occupying the summit. Even the party’s colour is maroon, the hue of the trademark Rajapaksa shawl.

Mahinda Rajapaksa still pays lip service to democracy. Gotabaya Rajapaksa can’t be bothered. He thinks the country is yearning for a tough grip. His. He is surrounded by retired generals and admirals and active businessmen who dream of reducing dissenting citizens to obedient subjects and employees with rights to wage-slaves. In Gotabaya Rajapaksa they have a leader who is willing to lead them to that heaven, even at the cost of a new uprising. Gotabaya Rajapaksa believes he is Sri Lanka. “If you harm me, it’s the country you harm,” he said, when he was just the Defence Secretary. Given this level of megalomania, it is all too easy to imagine what sort of a president he will make. Anyone criticising him would be deemed a terrorist, anyone working against him a traitor. Democratic dissent and peaceful protest will be criminalised first in life, then in law.

Rathupaswala 2013 was a preview of the future that could be ours post-November 16, 2019. A factory ignored environmental laws and poisoned groundwater. The people demonstrated demanding clean drinking water. They did not protest against the government. Water. and not politics. was their concern. But the factory was owned by a Rajapaksa-acolyte. The Siblings perceived the protest as a political threat. The army was sent, armed to the teeth, led by a brigadier no less. Three people died and scores were injured.

Gotabaya Rajapaksa is even more impatient of limitations than his brothers. In his eyes, every contradiction is an inimical one. He doesn’t like questions or protests. Violence is his first response to any sign of discontent. His extremism can give rise to a cycle of violence and counter-violence undermining political stability and retarding economic growth. Those who are willing to trade in their freedom for security or profit may end up with neither.

Gotabaya Rajapaksa obviously knows something about military operations. Given his experience beautifying Colombo, he should be able to start a prime exterior and interior decorating business.

His lack of knowledge about seminal issues of governance is frightening. At his first – and so far only – media conference, he was asked how he would deal with the debt crisis. He ducked the question. He clearly knows nothing of the debt crisis and cares even less.

That indifference fits with his record. In his previous avatar as the Secretary to the Ministry of Defence and Urban Development, he was blasé of not just constitutional, legal and ethical limitations but also financial ones. A man who takes over a profit-making institution and turns it into a loss-making one is not a good manager. Until Gotabaya Rajapaksa grabbed the UDA for himself, that institution never made a loss. After it came under Mr. Rajapaksa’s capable and iron control, it never made a profit. According to the Auditor General’s report, the UDA’s accumulated losses for the period of 2006-2011 alone amounted to over Rs. 1,230 million (Rs. 1.23 billion). Mr. Rajapaksa’s manifesto also contains massive giveaways. At his first and only media conference he was asked how he would find the money to finance his promises. Once again he had nothing to say, no answer to give. He seemed as ignorant about matters budgetary as he was about the looming debt crisis.

At this point, it is necessary to recall one of the key causes of the current debt trap — a flurry of high-interest borrowings from 2009 to 2014 by the Rajapaksa brothers to finance their various vanity projects. The end result was a threefold increase in the government debt and a doubling of external debt.

The Rajapaksas also “utilized state-owned enterprises to take out additional loans on its behalf. While the full extent of this extracurricular lending seems unknown, current estimates peg it at a minimum of $9.5 billion — which is all off the books of the finance ministry” (Forbes – 30.9.2016).

The Sirisena-Wickremesinghe administration mishandled the debt crisis, thereby worsening it. But it was not their creation. It was a Rajapaksa legacy, the result of borrowing at ruinous cost to finance projects that were as unnecessary as they were uneconomical.

A President Gotabaya is likely to take this approach to its illogical end, including the enactment of punitive economic laws. The Expropriations Act is likely to make a triumphant comeback, a way to punish entrepreneurs unwilling to play the crazy economic game.

Another punitive law that might see the light of day is the Sacred Areas Act. The Rajapaksa efforts to enact it were defeated by the judiciary in 2011. The draft bill empowered the Minister of Buddha Sasana to takeover ‘any area of land’ in ‘any municipal area, an urban development area or any trunk road development area’ or any land defined as a ‘Protection area’, a ‘Conservation area’, an ‘Architectural’ area or a ‘Historic Area’, or a ‘Sacred Area’.

If a President Gotabaya tries to resurrect this Act, would the judiciary stand in his way? Probably not, because any judge who tries might be tarred with the brush of terrorism. In an interview with The Island in April 2010, Gotabaya Rajapaksa talked of the need to enact “new laws to meet security requirements.” His list of those in need of new laws included, “a section of officialdom (that) could help the separatist cause by trying to appease foreign governments and some funding agencies…, the judiciary, particularly the Attorney General’s Department…and Opposition political parties or constituent partners of the ruling coalition.” If Gotabaya Rajapaksa is elected president, he will have all the legitimacy he needs to implement that old plan.

The tragic story of the Meethotamulla garbage dump and the people who lived under its deadly shadow is of relevance now, when we are faced with the choice of continuing with the messy democracy of the last five years or re-embracing organised tyranny.

The Sirisena-Rajapaska administration is guilty of ignoring the Meetotamulla issue, but it was the Rajapaksas who created it and exacerbated it. Gotabaya Rajapaksa’s much-hyped clean-up programme didn’t pay any attention to Colombo’s two biggest clean-up problems – garbage disposal and sewage disposal. The first omens of the Meetotamulla tragedy appeared in 2011 when several houses showed signs of structural compromise. The residents protested. “The then rulers used the army, police and the STF to chase us away,” Hemamali Abeyrantne, an activist-resident, recalled. “Our people were beaten and hospitalised.” (http://www.dailymirror.lk/article/Mayhem-Meethotamulla-Garbage-dump-turn…)

If he is elected president, one of the first tasks of Gotabaya Rajapaksa would be to destroy the democratic space that came into being in 2015. He, his family and the SLPP will labour tirelessly to ensure that the 2020 parliamentary election is held under conditions that are as non-democratic as possible.

The UNP, the JVP and those SLFPers who refuse to kowtow to the Rajapaksas will be particularly targeted. Constitution will be ignored and laws violated. By the time the parliamentary election is held, again, where we were in 2015, faced with the same choice – messy democracy or organised tyranny. In 2015, the defeat of the Rajapaksas’ was never in doubt. This time, the election is too close to be predicted with certitude. The anti-Rajapaksa alliance of 2015 exists today only in a truncated form. The sense of hope and enthusiasm that was obvious in 2015 has been replaced by disillusion and lethargy.

the voters will effectively have only one choice, irrespective of how many party symbols figure on the ballot papers.

‘So here we are once.

In 2015, Maithripala Sirisena would not have won an outright victory, had the JVP contested separately. In 2005, Mahinda Rajapaksa would have lost the presidency even with the Tiger-ordered boycott, had the JVP contested separately. The outcome this time could depend entirely on whether or not the JVP asks its voters to cast a second preference to Sajith Premadasa. The JVP has already sent a signal, but that might not be enough. The JVP should make the request openly, making clear what is really at stake.

A democratic government alone cannot save democracy. To be complete and secure, a democracy requires a democratic opposition as well. It is only then that democratic elections can ensure an outcome which strengthens rather than subverts democracy.

When the main oppositional formation, the government-in-waiting, is anti-democratic by nature, elections can bring about disaster. That is the plight of Sri Lanka today. The 2015 presidential election delivered a democratic government. But it couldn’t deliver a democratic opposition. In 2019, we have a chance of ending that lacuna.

If Gotabaya Rajapaksa is defeated, it will send the Rajapaksa project into a terminal crisis. The first faint signs of a war of brothers are already present. At SLPP rallies in Alawwa and Hasalka, some participants reportedly shouted interrupting Mahinda Rajapaksa’s speech. Mahinda Rajapaksa being heckled at an SLPP rally was unthinkable just a month ago. Today it is happening, a clear indication of what awaits the Rajapaksas, if they lose this round.

If Gotabaya Rajapaksa is defeated, the SLPP is likely to break into acrimonious factions. This would give the SLFP, the JVP and independent figures like Mahesh Senanayake a chance to claim a bigger portion of the electoral pie. They can then become a strong democratic opposition capable of holding the government to account. With a democratic government and a democratic opposition, Lankan democracy has a chance to stabilise.

But everything depends on one condition. Gotabaya Rajapaksa must be defeated.

Sajith Premadasa is not the ideal candidate or the best candidate; but he is the only candidate who can defeat Gotabaya Rajapaksa.

The choice is not a palatable one. But there’s no way out of it, not if we want to remain free citizens in a democratic country.