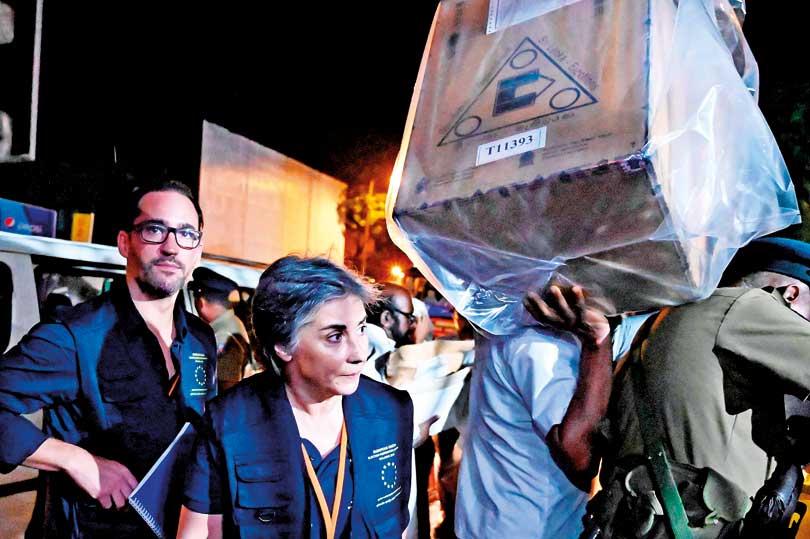 Sri Lanka’s eighth presidential election, with a record number of 35 candidates vying for the highest office of the state, concluded on Sunday. While polling was underway on Saturday, a number of independent parties and non-governmental organizations (NGO) conducted their election observations, in accordance with international election standards. Local and foreign observers who arrived in the island were deployed to polling stations across the country to monitor the polling process. Presenting their observations were two significant international election observers.

Observing the country’s legal framework as well as the electoral system, the monitors detailed their findings at media briefings held earlier this week. Their findings were based on election administration and election preparation, voter registration, candidate registration, the overall campaign environment, campaign finance and media environment.

Local election observers The People’s Action for Free and Fair Elections (PAFFREL) and Centre for Monitoring Election Violence (CMEV) noted that the presidential election took place without extensive violence with a high voter turnout of between 80-85 percent.

Concluding their presidential election observations, the European Union Election Observation Mission (EU-EOM) and the Commonwealth Election Observers stressed that the country should reform its legal framework to enhance the power of the Election Commission (EC) while urging the citizens and newly-elected leaders to be more inclusive at future elections.

According to observers the election took place in a largely free and fair environment, mostly free of violence, while the electoral process was well-managed by the Election Commission. The Daily Mirror focused on highlighting several key areas which came under the scrutiny of these local and foreign independent election observers.

In 2019 presidential election, the entire campaign on the ground was largely seen as peaceful and calm.

In the EU-EOM’s preliminary statement on election observations, the team identified that the legal framework in the country is adequate in conducting democratic elections in line with Sri Lanka’s global commitments, despite some gaps and weaknesses.

However, the team’s preliminary report observed that the Constitution does not permit the Supreme Court to review any existing laws to ensure harmony with fundamental rights. As examples, laws which exclude certain citizens from voting cannot be challenged, contrary to the international standards and some important gaps as the Constitution does not recognize a right of privacy.

“There is a need of a Data Regulation Authority in the country and to introduce a legal framework for the personal data protection,” the team said.

Presenting the mission’s preliminary statement, Chief Observer Marisa Matias said the present legal framework required important reforms to address enduring gaps, restrictions and legal uncertainties. It was also highlighted that introducing certain legal aspects to the EC are positive elements which can minimise offences during election process.
“Fines and sanctions for certain offences have not been revised up to 40 years and there is a failure in the Parliament to pass laws clarifying the EC’s constitutional powers resulted in limits to its capacity to issue regulations in certain processes during an election,” they highlighted.

While emphasizing on long term procedures to an election the Commonwealth Election Observation team also said that the country should focus on implementing a system of transparency during the entire election process adding that the EC should be more independent at future elections. 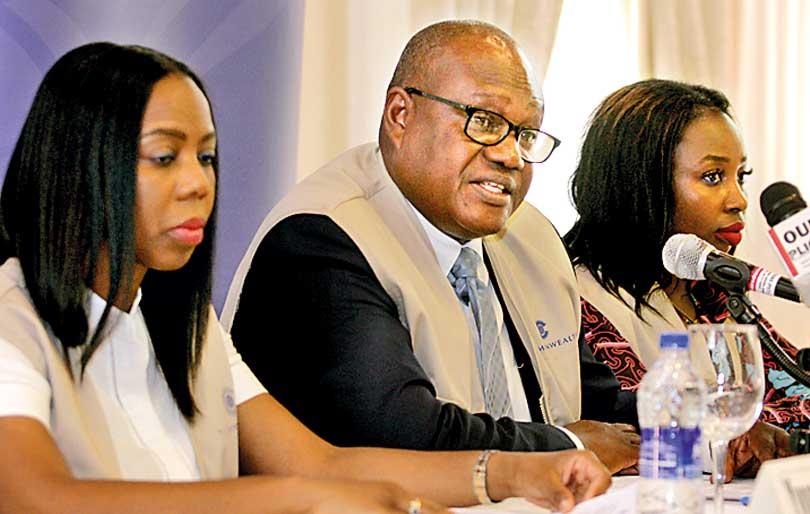 In the 2019 presidential election, the entire campaign on the ground was largely seen as peaceful and calm. Although there were few violent incidents, the procedure was well managed by the EC. Throughout the campaign, legal restrictions were in force against the use of a wide variety of political advertising, including flags and stickers, observers noted.

The EU and the Commonwealth observation teams also urged Sri Lankans and their newly-elected leaders to be more inclusive during future elections. In the preliminary report EU-EOM team mentioned that the highest-profile candidates, Sajith Premadasa and Gotabaya Rajapaksa had attracted large number of crowds at their rallies. Chief Observer Marisa Matias said that as long-term missions, the country should focus on implementing legal reforms on campaign finance and to regulate instances of bias, hate-speech and disinformation.

“There was a peaceful campaign on the ground contrasted with divisive incidents with hate-speech and disinformation which traditionally spread around social media. The absence of campaign finance law and biased election coverage continued on both state and private media affected the whole process,” she said.

While EU and Commonwealth observation teams noted the importance of the campaign finance law, both teams stressed that the country is suffering with a lack of campaign finance regulation. In the EU-EOM’s preliminary report the team mentioned that in the country there are no limits on contributions or spending, and no disclosure requirements, including of the origin of funding, reinforcing an uneven playing field.

“Candidates are required only to declare their assets but financial sanctions for non-compliance are insignificant. The country should focus on an initiative to reform a campaign finance law to protect the transparency of the whole election,” she said.

Reiterating the need the Commonwealth Observer Group (COG) Chairman Prosper Bani said that there is a need for mechanisms to regulate campaign finance in order to ensure transparency, accountability and an even playing field for all candidates.

One of the most important facts mentioned by both observation teams was private and state media biasness in favour of the two main candidates. The media environment in the country is diverse, with many outlets. The Constitution itself guarantees freedom of expression and the right of access to information. But the media related legal framework was only limited to the EC media guidelines for which compliance is only required by state media.

“The EC has constitutional power to issue guidelines to all state and private media but only state media have legal duty to follow those guidelines. However, the media biasness largely affected the whole election process,” EU observation team said.

“Private media was largely unregulated. We recommend that at upcoming elections, both private and state media be independently regulated under a legal framework,” Chairman of the Commonwealth Observation team Prosper Bani said, echoing the observations of the EU.

Women in participation in politics

The election legal framework for women’s participation is largely insufficient which was evident with only a single female representation.

EU-EOM observed that weak rules for inclusion of women in political parties, unregulated campaign finance that further obstructs women’s candidacies, and lack of an independent monitoring and implementation commission on women’s rights. Both teams had identified the fact of implementing more legal and social structures to increase women’s participation in politics in the country. However both observer groups complemented the inclusion of a commendable number of women officials participating in the polling process.

The Centre for Monitoring Election Violence (CMEV) in it’s concluding statement on the 2019 presidential election noted that the EC was notably more effective on polling day than during the campaign period.

According to CMEV, a total number of incidents recorded by the time polls closed was 196. In comparison to the 2015 number of 222, the incidents saw a minor reduction , they said. An overall decrease in incidents of direct violence including assault, intimidation and threats were observed while at least two incidents of serious assault were reported. CMEV made special note of the attack on buses transporting Muslim voters from Puttalam to Mannar, involving obstruction of vehicles, adding that it was the most serious incidence of violence reported on polling day. The organisation has urged the EC to carry out a complete investigation into the serious infringement of voter safety and rights.

Some instances of voter identification issues as well as the slew of fake news and hate speech were highlighted as aras which need serious attention. The organisation said it also received positive reports on election day, commending both election officials and police officers who worked to remove obstructions and barriers to vote.

Meanwhile People’s Action for Free and Fair Elections (PAFFREL) in their election day report noted that despite several incidents, the 2019 presidential election was the most peaceful and lawful election in recent times. They said that most reported incidents were dealt with promptly and effectively by the Police in cooperation with the Election Commission.

An attempt to set up unauthorized checkpoints in the North by security forces, five cases of assault, seven complaints of voter impersonation, four arrests of voters taking photographs of their marked ballot papers, one case of a voter attempting to smuggle the ballot paper and two arrests for distributing election propaganda, were highlighted in the report. The total number of complaints received by PAFFREL on Election Day was 158 with 42 complaints against illegal propaganda activities, 31 complaints against coercion of voters and 20 complaints against illegal transportation of voters. Among several issues highlighted by PAFFREL was difficulty in accessing some polling stations, which required voters to walk several kilometers in remote areas while some polling stations were deemed inaccessible to disabled persons. The need to enable those who are not registered to vote through a base registry which is valid for a longer period, was also mentioned in its report. Stressing on the need to regulate state and private media behaviour during election, PAFFREL observed several key issues. “There was a big disproportion in time allocated to candidates and to programmes attacking their opponents. The use of social media and fake news during the pre-election, polling period and on the Election Day violates all the election regulations of the country. Public officers who are not permitted to engage in political activities made use of the lacuna in the law to use social media for propaganda purposes,” the report said. Both CMEV and PAFFREL urged the Election Commission to reconsider the use of religious places of worship being used as polling stations.