Presidential Election 2019: In simple terms, the choice is between dictatorship and democracy – Jayadeva Uyangoda 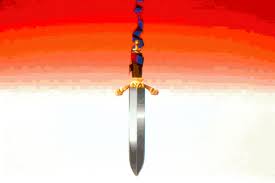 Image: The Sword of Damocles.

With the presidential election campaign now well underway, it appears that the contest is between the two main candidates, Sajith Premadasa and Gotabaya Rajapaksa. In the absence of scientific polling in Sri Lanka, no credible voter sentiment analysis is available. Therefore we are all compelled to rely on speculation.

Outside the two main candidates, Anura Kumara Dissanayake who leads the JVP alliance and former Army Chief Mahesh Senanayake have emerged as the two alternative candidates who have managed to garner the most amount of public attention. Between the pair, Dissanayake’s presidential campaign appears to command more support, with the crux of his base being the well-oiled and efficient Janatha Vimukthi Peramuna. Moreover, Anura Dissanayake is renowned islandwide for his oratory prowess. During the October 2018 attempted coup, it was Dissanayake who became the most formidable speaker against the anti-democratic conspiracy.

Mahesh Senanayake has come forward as an apolitical candidate claiming to represent the political aspirations of the civil society and community of professionals. He reiterates that his military background or identity is immaterial. His mission is independent, democratic and corruption-free governance, fundamental rights and ethnic harmony.

Thematically, there is hardly a difference between the political appeals of them two contestants. Both are appealing to the voters who are fed up with two main parties, the UNP and the SLPP, their political leadership, policies, political practices and governance. The differences are in their individual styles of politics and thematic emphases.

The remainder of the candidates appear to be of no real significance to the contest. Some of them appear to be “second preference candidates”. The reason for this is the probability of the need to consider the second and third preferences in case the two principal contestants fail to receive sufficient votes – which is 50% plus one vote.

In a sense, the 2019 presidential election has recreated the same political challenges, and propelled us to a similarly crucial juncture that the citizenry was facing in January 2015.

The political climate prevailing at the end of 2014 may have been forgotten over the past five years, but it has become imperative to jog the collective memory of the citizenry. The choice before us in the 2019 presidential election is whether we would want to pave the way for an oppressive authoritarian regime, or whether we should keep the space that opened for freedom, democracy and citizen’s rights in 2015, should still remain available.

In the January 2015 election, voters in the country rejected the former choice, and endorsed the latter. Unfolding before the voters in the 2019 presidential election, is the same 2015 challenge in a different form. On which of the two following alternatives will our country’s destiny be decided? Transition to a vastly repressive, right-wing authoritarian rule or maintaining open, yet minimally reformist democratic governance.

In simple terms, the choice is between dictatorship and democracy. In 2014-2015, the decision was not a tough one, given the line-up and configuration of political camps that had crystalized at the time The pluralistic, democratic camp of the country had clearly polarized against the communalist, authoritarian camp. That situation is not yet available in 2019. While the central political argument of the Presidential election is similar to 2015, the division of the camp representing democracy, freedom and rights is the new feature now seen in 2019. Quite evidently, a negative experience of the four-year Yahapalana government has provided the impetus for the current political reality of a divided camp of the democrats.

But we must be mindful not to tie the fate of the country, to our deep disappointment with the failed experiment that was Yahapalanaya. We should not allow that political disenchantment to blunt our political vigilance about the impending political catastrophe. We must find a way out out for combatting it in order to prevent the snuffing of the life of our country’s democracy and people’s freedom.

This is a major challenge that should invite the attention of the Janatha Vimukthi Peramuna-led coalition of National People’s Power (NPP) movement which back Anura Kumara Dissanayake and National People’s Party and civil-professional groups backing Mahesh Senanayake. Progressive sections of Sri Lanka Freedom Party and other civil social groups also should take that into serious consideration. This key political challenge requires further clarification.

Unlike in 2019, the choice before citizens who sought the political space for freedom, democracy and rights was fairly clear cut in 2014-15. The main reason for this was the black and white existence of those opposing political choices and configuration of political forces along the two opposing choices clearly in the public domain. The situation today is different.

Between the two options available at the 2019 presidential election, the darker and more sinister option has emerged perfectly obvious. The trouble, however, is that the alternative to this dark future does not shine particularly bright either.

The main political balance of forces that has so far taken shape in 2019 is in the form of a contest between a united coalition for a neo-right wing, neo-conservative capture of the state on one side, and three divided as well mutually antagonistic political formations that have failed to forge a united front to defend and preserve whatever that is left in Sri Lanka’s democracy at the crucial Presidential election in a few weeks, on the other.

There is another key factor to exacerbate the complexity of the present situation. It is an arithmetic equation. The divided democrats also divide the voter choices among themselves thereby weakening their electoral challenge to the united coalition of the counter-democratic option.

In a situation where Anura Kumara Dissanayake and Mahesh Senanayake manage to collect between them even five per cent of the total number of votes cast, they will no doubt ensure the victory of the primary opponent of all the democratic ideals that they themselves advance at present .

There are no easy ‘black’ and ‘white’ solutions to this cruel dilemma. The only option which the actually existing political conditions offer to us is to make a decision based on limited political alternatives concretely available. It is a choice between black on one side and white and not-so white on the other. Those citizens and political forces who are committed to democracy should decide whether they contribute towards ‘opening the gates’ for forces committed to propelling the country’s political destiny towards a dark future or whether to protect the political space for democracy so that the struggle for widening that space will remain available to them . That is how limited our political choice has become in this election.

The age in which we live is such that citizens with a cultivated political consciousness is destined to regret their decision after every election. This was certainly the experience of most Sri Lankan citizens after 2015. It is indeed the cruelty of democratic choices we have to make in the present age.

The very same cruel dilemma, its cruelty increased a few fold, lies before democracy-conscious citizens of Sri Lanka on November 16. They should not be contributing, directly or indirectly, to pushing their country towards an alternative that heralds a dark political future in which return to democracy and freedom will require a new phase of massively costly sacrifices through waves of struggle and resistance.

The best tribute to democracy is to protect it at the least possible political cost.

Thus, it is not yet too late to form an informal coalition of democratic forces that back Sajith Premadasa, Anura Kumara Dissanayake and Mahesh Senanayake, to defeat through a tentative united front, the neo-right wing and neo-conservative coalition. This tentative coalition could fight the presidential election together to preserve democracy and fight the subsequent parliamentary elections separately to consolidate its democratic gains. Such a strategic shift will certainly enable the latter two candidates and their political allies to gain much more politically, further widen their political appeal and credibility, and of course re-emerge with the least political cost and therefore stronger.

Courtesy of The Sunday Observer

Above image courtesy of mysolveout.blogspot.com