Presidential Commission of Inquiry to begin sittings within next fortnight 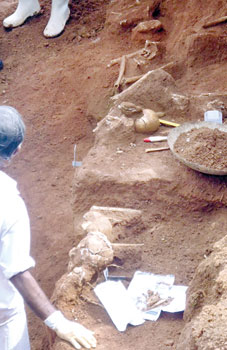 The three-member Commission of Inquiry appointed by President Mahinda Rajapaksa on Wednesday, has been asked to submit a report within six months. Its other members are ex- Parliament Secretary General Dhammika Kithulgoda and retired High Court Judge Bandula Atapattu.

The appointment comes amidst concerns expressed by the Bar Association of Sri Lanka (BASL) and the JVP, over the transfer a week ago of Matale Magistrate Chathurika de Silva who was hearing the case on the mass graves.

When the case was taken up before her on May 31, she directed that advertisements be placed in all three languages in the newspapers, asking the next of kin of those who disappeared during the period of the JVP insurrection in the late 1980s, to come forward and assist the investigation. Her directive came after forensic reports submitted to Court revealed that the bodies were likely to be from the late 1980s. The transferred judicial officer assumed duties as Colombo Additional Magistrate last Tuesday.

When the mass graves case came up before the new Matale Magistrate Sampath Gamage last Friday, he postponed the case till August 19. A group of around 50 persons comprising relatives of those who disappeared during the last JVP insurrection, gathered outside the Court and staged a protest, calling for a proper probe into the mass grave site.

Meanwhile, retired Justice Imam said that preliminary arrangements to begin Commission sittings are already under way, and the venue is likely to be the BMICH. A decision on whether the sittings are to be held in public, will also be taken within the next few days, he said. The commission has the discretion to decide whether to hold sittings in public or in camera.

Several human skeletons were initially unearthed on November 26, 2012, whilst excavations were taking place in close proximity to the kitchen of the Matale General Hospital. Up to February 12, 2013, a total of around 155 human skeletons had been unearthed.

Speculation has been rife since the discovery of the mass grave, with claims that the skeletons were of victims of a small pox epidemic that affected the country in the mid-1940s, while the more contentious and controversial claim is that they were victims of the government crackdown on the JVP’s1988-1990 uprising.

The Commission is also mandated to probe “whether such human bodies came to be buried as a result of an illegal act or acts, and if so, whether any person or persons are responsible.” It is also mandated to inquire into and report back adequate cogent factors or evidence that would lead to identification of the person or persons responsible, in case the deaths were caused by an illegal act, as well as recommend legal action, that could be instituted against those found to be responsible.

The Commission has also been asked to recommend measures that should be taken to ensure that there will be no recurrence of such illegal act or acts in the future, and if there is any reasonable relief to be granted as an obligation on the part of the government, to the parents, spouses and dependents of those identified as having come by their death.

The President has authorised all public officers and other persons concerned to assist the Commission and furnish all such information. Justice Imam said that the Commission would inform the date of commencement of commission sittings by public notice shortly, so that interested persons can come forward and give evidence. The Commission will also summon experts to assist it.

BASL zonal VP to report to Ex. Co. on Matale Magistrate’s transfer
The Executive Committee of the Bar Association of Sri Lanka (BASL) yesterday instructed the Zonal Vice President of the Central Province of the BASL to submit a report to the Ex-Co on the transfer of Matale Magistrate Chathurika De Silva, before whom the Matale mass grave case was being heard.

“The matter came up at our meeting today and, as there are mixed views on the matter, we have asked for a report. Once that is received, we will meet and discuss the matter,” BASL President Upul Jayasuirya said. Meanwhile, JVP parliamentary group leader MP Anura Dissanayake said that the appointment of a presidential commission to probe the mass grave case, would hinder the ongoing judicial process. “A presidential commission will eventually make recommendations that will have to be used to prosecute suspects in a court of law. When the legal process is already in place, we see no need for a commission as well,” Mr. Dissanayaka told the Sunday Times.

He noted that, in 1994, former President Chandrika Kumaratunga appointed a Commission of Inquiry into the involuntary removal or disappearance of persons in the Central, North western and Uva provinces, and in its final report, persons who were responsible for the disappearances were identified and named.

“What the President must do is take a look at that old report and take legal action against those who have been named as being responsible for the disappearances,” the JVP MP said. That 1994 Commission received over 15,000 submissions, of which 6,443 complaints were inquired into. It included names of those the Commission found to be credibly implicated in involuntary removals/disappearances in these provinces .The Commission also sent a confidential list under separate cover to the then President.
By Chandani Kirinde
ST