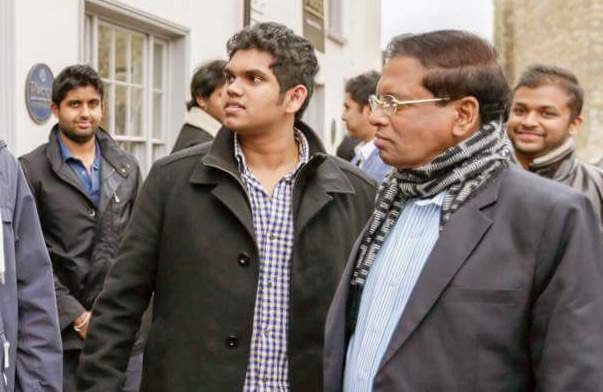 The president’s son Daham Sirisena and his PSD bodyguards assaulted security guards of ‘Clique’ nightclub, situated in the upper floor of United Motors at Town Hall, Colombo around 2.00 am today (08), following an argument over their not being allowed to enter the premises.

The incident began after the security guards said only Daham and a few others could enter. Security guards said Daham had not been in normal self at the time. A person by the name Jeevan Premadasa has sustained injuries and is presently receiving treatment at the accident ward of the Colombo National Hospital.

Media not allowed to report incident

Owners of this nightclub are the businessmen Dimitra Jayasuriya, Nadeem Rajabdeen and Yasar Farooq.

The complaint lodged to the police by the nightclub’s management and the security guards has now been withdrawn at the insistence of the owners. A security network is in place in and around the place and no media personnel is allowed to enter. Also, the owners have prohibited all employees of the nightclub from speaking to the media.

Law enforcement officers have been stationed near the injured security guard too, preventing any access to him. The incident occurred while the president is overseas.

Daham first caught attention of the media when he and his friends assaulted Asela, son of senior DIG Ravindra Vidyalankara, at a resort in the eastern coast in 2013. The incident was given wide publicity by the media unit of the president, who was Mahinda Rajapaksa at the time.

The second incident involving him occurred just a few days after the ‘Yahapaalana’ government came to office. That day too, he entered a nightclub and played havoc there. Angered by the incident, the president reprimanded him and sent him to England, purportedly for higher education.

Although admitted to Buckinghamshire University, Daham did not pursue any studies and came home after some time. He had not paid the rent for the house which he had rented there, and the owner, a property firm, had sent many letters of demands to the Sri Lankan high commission in London, threatening legal action. The president’s eldest daughter and her husband mediated and settled the matter. However, the property firm in question has blacklisted Daham.

The media and all persons loyal to the ‘Yahapaalana’ government are waiting to see what action the president will take against his son, whom he loves dearly, over the latest incident. That is because all of them well remember the unpleasant past involving Malaka, son of minister Mervyn Silva, during the Rajapaksa regime.

– Lanka News WebPhotos of the destruction: