President Reveals True Nature of His Governance! :The whole system of democracy, dissent and criticism appeared a joke to him 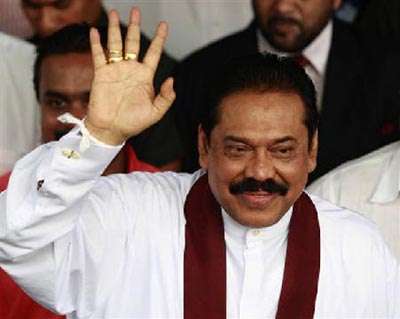 Laksiri Fernando
It was shocking, outrageous and deplorable, but not necessarily surprising. It was shocking since he didn’t have any qualms to reveal it openly. It was outrageous and deplorable because it came from the country’s Head of State more than the Executive President! It was not surprising however since many people had come to doubt or know about it for a long time.

There are two other statements which are quite alarming in the President’s speech. One is about how misdeeds of people should be handled in the country or in the judiciary in general. Second is about why he has come to the conclusion of appointing another committee. The two are not necessarily one after the other but all mixed up as usual.

Here we have a President who says “we tried to cover it up quietly since he was our man. That is how we do things, No.” His speech was in Sinhala and this is a reasonable translation or interpretation.

The matters he was referring to were not only on the impeachment motion against the Chief Justice, which has already boomeranged on the government, but also about one of the most publicised corruption cases against the Chief Justice’s husband in the history of the country, excessively publicised by the state media. The occasion was the opening ceremony of the new building for the Institute of Chartered Accountants (ICA) at Malalasekera Road, Colombo, on 11 December 2012. All quotations here are translated from and the interpretations are based on the Final Cut unedited on 11 December 2012 from News First (MTV). This is undoubtedly a minefield of spicy political material; I would have given this for my final year Political Science special students for their analysis in terms of ‘good governance and ethics of politics.’

General Comments
He started with general comments on development and achievements of the ICA. Commenting on the accountants, he said they are perceived as obstacles particularly in the government sector, as they raise so many questions and rules. This is the same in semi-government corporations. Then he came to the point of referring to some corporation Chairmen and said that “they even hoodwink the Accountants.” “Then the opposition shouts and we go and punish them. But when we punish, the opposition goes and defend them.” The whole system of democracy, dissent and criticism appeared a joke to him.

He further claimed that “we most of the time listen to the opposition and when we listen and try to punish, they say the procedures are wrong.” This was like a rehearsal to blame the opposition for the impeachment! He added that “when a wrong is done what we have to look at is the facts and facts alone.” He implied that the procedures are not that important and that was obvious from his gestures. In essence he questioned the legal principle that “not only must justice be done; it must also be seen to be done.” The question of a fair trial was not at all referred to although he soon started talking about ‘laws and the importance of the constitution from a different point of view.’

He also referred to a case against a judge in Kegalla rather hilariously who was apparently forced to resign by passing a resolution in Parliament perhaps as a precedent that needs to be followed in the future. Then you don’t possibly need a Judicial Services Commission (JSC), independent or not. Then he referred to the case of impeachment against Nevil Samarakoon and emphasised that “it was only due to a word that he stated against the President of that time.” He implied that the powers of the President are that powerful. He asked someone in the audience whether he is correct or not also adding that “I am subject to correction, because what I say should be correct.” He also referred to the impeachment against Sarath N Silva briefly. But what was important at this juncture was how he referred to politics and opposition politics.

Apart from an effort to discredit the current opposition, the whole attitude on politics and opposition politics was alarming. The impression cultivated is that democratic politics is a joke or at best a game.

He said that he is commenting on the issue of impeachment because it was raised. Otherwise he didn’t want to. That can lead to misunderstandings. He said that it was the opposition who raised the issue first. The full text of his declaration was the following.

“They were our appointed Chairman and our appointed Chief Justice. There was an allegation about the Chairman, who was at the NSB, I believe, about financial matter that he sold some shares, at a lower prize when they were higher. There was a big shout, in the newspapers and in newspaper headlines every day. I urgently called the people and asked them to take the shares back by giving money back. It was covered up with difficulty. That is how we do it for our man, no.” (yanthan eka vahala dala shape kela. Ehemane keranne ape minihata).

Apart from being incorrect in his interpretation of the NSB scandal, the way he had concealed or tried to conceal the matter was outrageous. The interpretation was incorrect as it was not a case of selling NSB shares but buying The Finance Company shares at a higher price (Rs. 50 per share) when the market price was mere Rs. 20. It was reportedly was a question of NSB being forced by the government to buy a stake (13 per cent) in the bankrupt The Finance Company involving Rs 390 million rupees. Non-executive Chairman possibly could have been a mere scapegoat.

The main effort of the President was to blame the opposition for the impeachment motion. The argument went as follows, reminiscent of the famous King Kekille. “The opposition not only went and made a complaint before the Bribery Commissioner. They also said that for the wrong that the Chairman had done, the wife also should be punished. That is also something the opposition said and not me. The governing party was silent. It was also the General Secretary of the UNP that said first that they would bring an impeachment motion.”

It is a fact that the opposition raised the NSB issue and also raised some issues against the Chief Justice. But what triggered the impeachment process on the part of the government is not the NSB issue but the Divineguma issue as many discussions on the subject has already established. The President wanted the public to believe that the 117 members signed the impeachment motion because of the pressure from the opposition!

If that is the case then it would be very easy for the government now to withdraw the impeachment motion without confusing the people, disrupting the judicial process and creating a bad name for the country within the international community. If the impeachment motion is withdrawn by the signatories even now the whole report of the PSC will become defunct. Instead what the President has proposed is another Committee, allegedly an independent one, to scrutinize the already completed PSC report! It is in effect is a government report.

Other Issues
There are two other statements which are quite alarming in the President’s speech. One is about how misdeeds of people should be handled in the country or in the judiciary in general. Second is about why he has come to the conclusion of appointing another committee. The two are not necessarily one after the other but all mixed up as usual.

He said “When I was silent, members of Parliament signed an impeachment motion saying that we cannot be at the receiving end all the time (meaning the opposition criticism). I was not happy even at that time but after it has been gone through the Parliament what is left is to appoint a committee and get a report.”

He gave the impression that he didn’t believe the charges were grave. He made a comment saying that “when somebody is fallen, then all the enemies give a hammering and that is the status of the country.” He in fact betrayed all the MPs who signed the impeachment motion sans the Rajapaksas who cunningly evaded signing the motion for some reason. He also said that “I regret the situation, I am also a lawyer and a professional, I don’t like to demean (helluwata lakkaranne) the judiciary. If somebody has done wrong, I don’t think it should be discussed openly, it is not good for the judicial system. Things have gone to that extent and regrettably though we are forced to discuss these matters. He also said that the matter has become unnecessarily politicized.”

He said that “before I take action on the report I want to get the opinion of an independent committee.” The reasoning went like the following. “I am only answerable to my conscience (mage hadawatai mama uththera diya uththay). I have to satisfy myself before I act, that it is correct. This is my own conviction and it is not there in any book or law.” This comment has already generated criticism people asking whether the President is not answerable to the people or not.

There were of course few other comments at the end referring to the duties of the people to the country and professionals going abroad and sending or not sending money back to the country, but those were not directly relevant to the theme of this article.

Conclusion
It was undoubtedly a remarkable speech, a minefield for further study, revealing rather unashamedly how Sri Lanka is governed today. There is clear cynicism regarding dissent, political criticism and opposition in the country, based on his own experience as an oppositional agitator and even the leader of the opposition. Even the present agitators and leaders of the opposition should do a soul searching exercise to see whether they come under the same category or not.

Most alarming is the way he has revealed how he was trying to fudge a scandalous share deal between the NSB and the TFC without thinking of punishing the culprits especially when the savings of pensioners and ordinary people were at stake. This undoubtedly is the way the whole economy is run. The President is also the Minister of Finance. Even in respect of the judiciary, he said that the wrongs (varadha) should not be made public in his opinion, at a second occasion in the speech.

To him the procedures are not very important in a disciplinary case, only facts are important. He appeared to view that the Parliament could punish the judges, referring to a dismissal of a judge in Kegalle in the past. He however washed his hands like Pontius Pilate to show he is not responsible for the present impeachment. He even betrayed his Parliamentarians, like Judas Iscariot, who prepared the impeachment motion, apparently on his behalf or on behalf of the family.

Many times he pointed out his powers as the Executive President under the ‘JR’s Constitution’ and that is the phrase he used. He said he is responsible only for his conscience or heart (hadavata). He is apparently not responsible for the people. The President revealed the true nature of his governance in a single speech.
The President tried to argue that the impeachment motion was brought because of the opposition. If that is the case then it would be very easy for the government now to withdraw the impeachment motion without confusing the people, disrupting the judicial process and creating a bad name for the country within the international community.