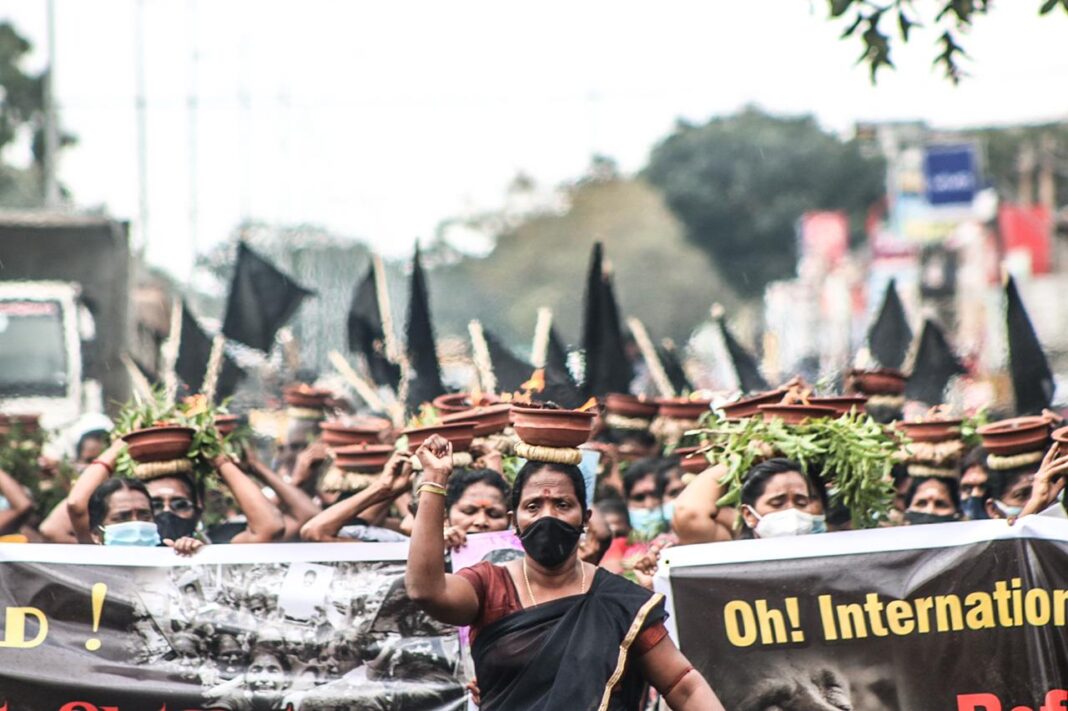 Image: Tamil women campaign for the justice for the disappeared. (file)

Hon. Presiding member, thank you for the time given to me to say a few words on the policy statement made by his excellency the president in this house. When the party leaders met last week, there was long discussion as to the sufficiency of time, the opposition sought more time, we thought the president will actually lay out something that we must debate in this house and we thought we need more time for it.

“When the country is facing such an enormous challenge, all that the president has to say is just this one paragraph two sentences, one identifies the problem, the other lays the blame on someone else’s shoulder.“

And we spent quite a bit of time handling over the insufficiency of the time allocated for this debate. But listening to His Excellency yesterday, he made a listless speech he made in this house, I am convinced that the time allocated is too much. There was no policy, that was stated. There was a few identification of issues but no answers given. Nothing by way of a message on the inauguration of new session of Parliament that the parliament should get excited about and debate for two more days.

He was right when he identified one issue. When he said “the more serious challenge we face today in economic management is a current foreign exchange problem”. That we all know and then he says “today we are encountering the climax, of a problem for which a number of governments have failed to provide a lasting solution”.

He rightly doesn’t blame just the last government, he blames a number of previous governments and if you go back for two more governments in the past, those were the governments headed by president Mahinda Rajapakse.

So he has fairly laid the blame for the crises that the country faces today if you take the last 15 years, 2/3rd of that was the government of president Mahinda Rajapakse. And says that they failed to provide a lasting solution. But as I said, he identifies the issue, he lays the blame on the shoulders of someone else, his own brother, but doesn’t provide a solution or direction.

A policy statement of a government is one that gives a direction, one that points in a particular way to give the people confidence. One that says this is the path that we will trod, this is how we intend, tackling these issues. While he makes the statement, we are told by text messages, that another 500 million US dollars has been put into our begging bowl. It’s like a daily existence now for this country.

We hold a bowl ad wait out there, and someone has to come and give us the next meal. That is the level to which the country’s finances have come to. We really don’t know where our next month’s supplies are going to come from. Or what we will pay towards that.

When the country is facing such an enormous challenge, all that the president has to say is just this one paragraph two sentences, one identifies the problem, the other lays the blame on someone else’s shoulder.

He started his speech by rightly identifying the fact that there are different members in this house. Elected by different people with different mandates. So he said right at the beginning of his speech. But as he went along he probably forgot how he recognizes this house. Because when it came to the people of the North and the East, he said something that was opposite to how he started this speech.

And this is very very serious, I quote the president when he said “we regard governments prime responsibility towards reconciliation as providing such facilities to these people without discrimination” this is talking about the people in the North and the East, it is an insult to the people who’ve been struggling and fighting for their dignity to be treated as equals in this country.

That’s far more important than what he identifies here as facilities. They haven’t been fighting for facilities, they have been fighting for their equal citizenship right, their right to self-determination, their right to self-rule, for share of powers of governance, and for the president to reduce all of that to a level of saying, “you know that there are basic facilities that are necessary, that is what will bring about reconciliation” says much about what he understands the National problem to be.

Then he says therefore I urge the members of Parliament representing the people of the North and East of this Parliament to set aside various political ideologies at least temporarily and support the government’s effort to improve the living conditions of the people of those areas.

Having recognized that we have different mandates from our people, he says set aside your ideologies even temporarily, what does he mean by ideologies? I read the Sinhala and Tamil texts it should have been translated  “Policies” your party policies.

Our party policy is a mandate we have received from our people. And that is a consistent mandate that we have received for which we serve our people. We don’t listen to others who tell us how we serve our people. We listen to our people and the mandate that they give us. so it doesn’t lie in the mouth of even His Excellency the President to tell us to lay aside the mandate that our people have given us, and to join him in providing basic facilities. So for shortness of time but also because I said this speech, or policy declaration , I don’t even want to call it a throne speech doesn’t deserve any more time of this August assembly and I conclude my speech with that. Thank you !

(Speech made in Parliament by Hon. M.A. Sumanthiran M.P. on 19th January 2022, on policy statement made by HE, The president)