President Rajapaksa is responsible for 80% of COVID-19 deaths; they are “homicides”! – Anura Kumara Dissanayake 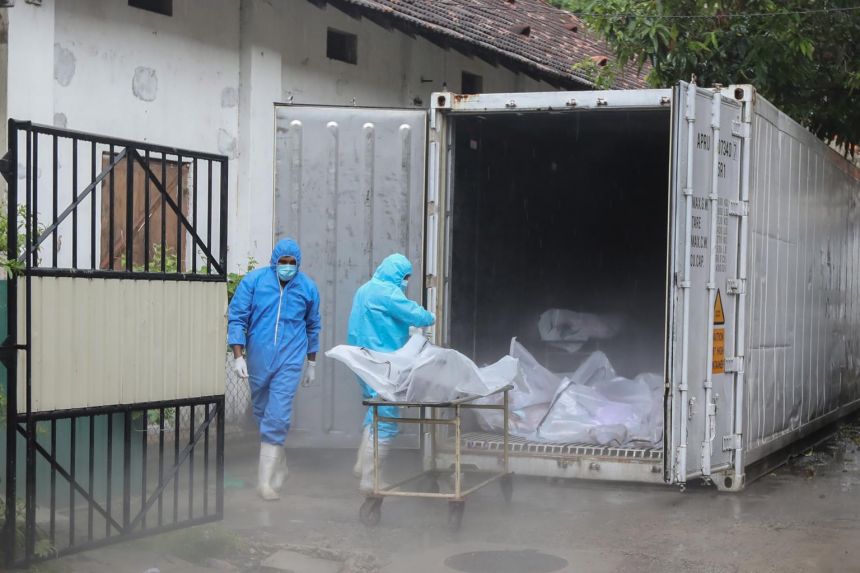 Image: Throughout the pandemic, the state has disposed of bodies and not released them to families. PHOTO: EPA-EFE/www.straitstimes.com/

According to current reports, more than 75% of COVID-19 deaths are of the persons over the age of 60. In view of this situation, the World Health Organization requested that a national vaccination program be developed in each country.

According to that programme first priority in vaccination should be given to the health staff. Next are people with various complications and citizens over 60 years of age. However, rejecting this program and the recommendations of experts, the government decided to  vaccinate those between the ages of 30-60.

We would like to know who is behind this policy change. Even Minister Sudarshani Fernandopulle was not aware of this change. Today, even  vaccinations is done on a distorted plan.

Ignoring the recommendations of the World Health Organization and other experts, the government led by the President is playing a deadly game.

But for his safety the President has restricted the number of employees of his secretariat.

The authorities are distorting accurate data and information that can project Covid-19 tendencies. No citizen of this country trusts the data on Covid-19 deaths and infections provided by the authorities. The most serious thing is that the predictions made on this distorted data are wrong.

That is why more than 150 people die every day at present.

How much does one death or one event from the plague affect their families, relatives, and loved ones? Even a normal death can be devastating. To get rid of sorrow, we regularly seek help through rituals, including religious observances.

But today the adults who took care of sons and daughters for 30-40 years are dying.  Even their place of cremation is not  known.

Government Medical Officers’ Association say that 80% of these people could have been saved if the proposals put forward by them had been implemented. If so, 80% of these deaths are due to negligence. They are homicides. The President is responsible for these indirect homicides.

Even if action is taken today according to the recommendations given by expert groups at this particular moment, the results will  reduce deaths and infections in 10 days or so. So far, hundreds of people are dying from wrong decision making of the president.

Aren’t these murders? Isn’t the President responsible for that? The President cannot absolve himself of responsibility for these massacres.

Even the Government Medical Officers’ Association, a member of the Presidential Task Force on Covid-19 Prevention, reports that the daily death toll has exceeded 250.

A very dangerous information was revealed at the Gampaha District Development Committee meeting. The health department had informed that 12,555 cases of infections were reported from 1st to 9th August.

However, only 3529 infected people have been revealed in official government documents. 8,326 patients have not been taken to the final reports. This is three times as many as the official record. This situation was also reported from the Badulla District and the Eastern Province.

We would like to know whether the President thinks of hiding the data and escaping the disaster. A ruling party MP himself had stated that there was a deadly data distortion.

An individual along with the Army Commander is playing a deadly game endangering the lives of all the citizens of our country.

Today, those who express what he dislike are expelled. That is how Pavithra was silenced in the cabinet. No official is presenting information before the President today. That is the ignorance of the ignorant.

The President cannot be absolved of responsibility for this catastrophe. The ruler of the country in this this particular moment is President Gotabhaya Rajapaksa. With the passage of the 20th Amendment, he has attained the monopoly power.

Today those powers are not used to save people from death. All those powers are been used to push the people towards death. The President is no longer responsible for the lives of the citizens of this country.

He lives in his own cocoon and lives in a dream world. He does not hear and listen the catastrophe taking place in the country.

Take your health safety to your own hands. Be safe. Give this massage to others.

(A summarised translation of  a speech made by Anura Kumara Dissanayake in Sinhala.)