President is the Biggest Obstacle for Free and Fair Election. By Anura Kummara Dissanayake 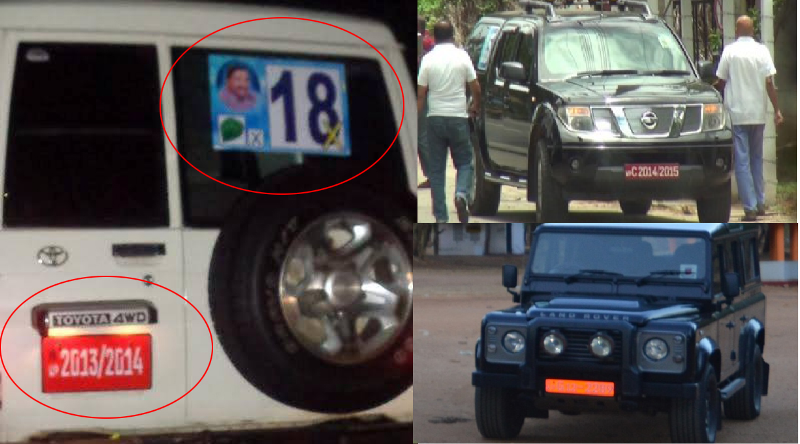 [Illegal use of unregistered vehicles for Govt election propaganda in Monaragala; Photos:LT]
JVP calls on People to Defend Democracy at Uva Elections
By Anura Kumara Dissanayake-
Today the President has made opening school buildings one of his election projects. As such, the president uses the powers given to him illicitly. As the first citizen of the country he is bound to be an example regarding the supremacy of the law. He is the one who should take the lead in holding a free and fair election. But what happens is that the President blatantly violates election laws. The biggest obstacle to hold a free and fair election has become the President.
Uva PC election cannot be considered as an isolated election. President Mahinda Rajapaksa has made the election a part of his next scheme for power. The President is planning to call the presidential election due in January 2017 most possibly in January or March in 2015. The provincial council election has been held as an assessment for this big event. He treats this election as a test run. As such, this provincial council election has a special importance to Rajapaksa regime than the PC elections held earlier.

Poverty in Monaragala
When compared with other PC elections what is important is that the chief candidate is a very close relative of the Rajapaka family. As such, the government knows the election could be an opportunity to express the opposition that is developing in the country against Rajapaksa regime and the family. The other disadvantage the government has is that the election is held in an area where nothing has been done for the people. Majority of the people suffer from lack of drinking water. The main source of income in the area is cultivation. Many do not have lands or facilities to cultivate and have become people suffering from poverty. Also, the children live under very low health conditions. 67% of the schools in Monaragala District do not have toilets. 27% in Monaragala suffer from anemia. One out of four people in the District suffer from diseases caused by low blood cell count. This rate in Badulla District is 16%. The people in remote villages in the two districts do not have even the basic facilities needed for their living. Many do not have houses of their own and do not earn enough to meet the ends meet. They are confronted with wild elephant menace and drought. Due to the reasons these people are made to suffer and inability of the government to find any solutions for their issues has made the election a challenge for the government. As a result the government has resorted to violence, violation of election laws, deploying gangs of thugs and use of state power, state media and state employees to carry out its campaign. The Commissioner of Election too had to admit that the election to Uva PC is deplorable than the ones held for Western and Southern PCs.

Uva Election is not an Election
The JVP, the UPFA and many other parties have presented nominations for the election. The election should be held between political parties. However, the whole election process has become a fight between the government and the political parties. The JVP carries out its election campaign deploying party members and supporters. Our campaign is organized by party activists. However, the UPFA has entered the election process not as a political party but as the government. During the past few days the President has opened school buildings in the two districts. He doesn’t go to the North Central or North –Eastern provinces for such ceremonies. He participates in school building opening ceremonies in Badulla and Monaragala districts to engage in the election campaign using his powers.

Normally, no candidate is expected to participate in such ceremonies. However, President’s nephew stands very close to the President in such ceremonies. He is the chief candidate. Not only school buildings but streets, bus halts are also opened by the President during the campaign. Normally a political party could engage in its propaganda campaign within a ground where a meeting is held. However, today (12th) the whole of Badulla has been decorated to receive the President. The opening of Bandarawela bus stand is not a state ceremony. However, it has been made an election project. When a president did opened a school building in our country? Earlier such buildings were opened by principals or Zonal Directors of Education.

Election Bribes
Distribution of goods has come down to a very low level. The preference number is displayed in ‘sil’ clothes and religion too has been used for the election campaign. Rajapaksa regime has used religion for its campaign. The preference number and the party symbol are displayed even in bottles of drinking water. The government makes use of peoples thirst also for its election project. Rajapaksa regime that hides behind the ‘Kurakkan’ shawl is grinding all values of our culture into dust.

For the first time in Sri Lanka members of the security forces have been deployed for election campaigns. Certain candidates have deployed security personnel from camps in groups in their election campaigns. From the most senior member of the security forces to the personnel in the lowest ranks have been deployed for the campaign of the ruling party. State officials have been terrorized and made to join the campaign. Development officers and Samurdhi officers from several districts have been forced to join the UPFA campaigns. A large number of state officials have been forced to engage in UPFA election campaigns. The office of the Election Commissioner and the JVP intervened to stop certain attempts to use state employees in the UPFA campaign.
30 JVP offices attacked

A large number of election offices were attacked. 30 of our party offices were attacked. At certain places the same office was attacked thrice or more times. Even offices near police check points and barriers were attacked. The state power has been directly used for such attacks. There have been four instances of shooting. However, no one was arrested. How did these gangs get weapons? Our comrades were assaulted at several instances. This regime is unleashing terror during the election campaign.

Two schemes of the Govt
The government has two schemes. One is to stop the dialogue going round among the people. They are attempting to stop the point of view we are taking to the people. If the people in the area are made to come out with their independent views an anti-government view would come up. The government is scared of this. The second scheme is to stop the masses who would vote against the government from going to the polling stations. This situation is developing daily. Two or three days before the election the media would not be allowed to publish anything. We would not be able to say anything. The terror unleashed is so frightful.

Already, gangs of thugs have reserved hotels and guest houses in Badulla and Monaragala for their schemes. In certain villages gangs of thugs have been stationed in rented out houses. This is a process carried out by the government through a psychological survey to stop anti-government votes. This attempt should be defeated. Already, a Chairman of a state media institution has been transferred and a person with expert knowledge of mudslinging has been posted there. State media is completely deployed to sling mud at the opposition and carry out the government campaign. Other media institutions are being officially and unofficially threatened. In one private media a programme on Uva has been stopped from yesterday (11th) night. It is due to pressure from government party. This is an attempt to build power for the next 7 years.

As such, we would like to invite the people of this country and specially the media to rally against this situation. Every political party has a right to express their views. Every community has a right to express their views and question standpoints of political parties. It is this right that is being violated. The democracy in our country is being abolished when it is needed most. We ask all people who wish for democracy in our country to build a strong wall against this vile attempt. If this experiment they are trying out in Uva is successful they would carry out this illegal process to protect their illegal power in the future as well. Hence, it should be stopped at its commencement.
[Excerpts form the address of the Leader of the JVP Anura Dissanayaka at a media conference held at the JVP head office at Pelawatta 0n 12 sep 2014]