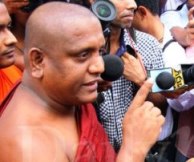 President Rajapaksa Promises Sinhala Ravaya That New Legislation to Ban Killing of Cows Will be Introduced in Two Months
Dharisha Bastians
Last Wednesday, police officials paid a visit to the beef stall at the Bambalapitiya Market on Galle Road. They had a polite warning for the beef vendors at the market. The Sinhala Ravaya and Ravana Balaya march would pass through the Galle Road in Colombo early next week, they said, and the best way to avoid unruly incidents was for the beef stalls to shut their doors on that day.

The warning came one day after participants in the Sinhala Ravaya foot marched from Kataragama to Temple Trees in Colombo, passing through Tangalle and setting Muslim owned beef stalls ablaze in full view of the police. The saffron army has passed through town after town along the Southern coast, issuing dire warnings of their arrival in the area 24 hours ahead and challenging meat vendors to remain open when the ‘river of people’ pass through their towns.

In fact, the past week has been filled with incidents in different parts of the country with ethno-religious extremist groups like the Sinhala Ravaya, the Ravana Balaya and even in some instances, the now infamous Bodu Bala Sena, publicly taking the law into their own hands while state law enforcement arm stands passively by or take instructions from the mobs led by men in saffron robes.

In Mulleriyawa on 17 June, a Sinhala Ravaya affiliated monk and his group allegedly manhandled a group of Jehovah’s Witnesses, threatened them with dire consequences and escorted them to the Mulleriyawa Police Station where they lodged an official complaint and demanded the group’s arrest.

The Sinhala Ravaya’s foot march calling for a ban on cattle slaughter (with a demand for the repeal of the 13th Amendment thrown in for good measure) however, has brought about the worst of the incidents with crowds of people whipped up over the week long march with the most rabid and intolerant rhetoric.

In Maggona last Friday (21), lay members of the Bodu Bala Sena group forcibly removed a moonstone or ‘sandakada pahana’ that lay at the foot of a statue of St. Mary at the road leading to the St. Vincent Home. They charged that the moonstone was part of Sinhalese architectural heritage and had no place near a Catholic structure. But residents say that as long as they could remember, the moonstone and the statue had coexisted within the monument.

The statue that was being repaired and given a facelift was to be inaugurated during Sunday mass on 23 June. But the area became restive after the BBS members removed the moonstone, residents say. On Saturday (22), evening a large crowd of Catholic devotees commenced a protest near the statue, demanding that the moonstone be returned and restored to its original position. Catholic priests and parishioners joined the protest.

The situation became so tense that the police and riot squads moved in with tear gas to prevent major clashes. The area’s Divisional Secretary and local Government members also turned up at the scene. About three hours after the protest began, residents say four BBS members from the Maggona area turned up at the protest and apologised to the Catholic priest for removing the moonstone. The stolen moonstone was handed over to police custody and the police in the area have decided to refer the matter to court. But the issue did not end there.

The Sinhala Ravaya marched through the town the day after the Catholic protest and the return of the moonstone into police custody. Completely updated on the weekend’s events in Maggona, the Sinhala Ravaya chanted hostile slogans, leading to a confrontation between the marchers and a significant number of Catholic residents in the area who arrived on the scene to boo and heckle the marching crowds.

According to eyewitnesses, the hooting angered the monks leading the march and a confrontation was avoided only due to the efforts of the Special Task Force personnel who had moved into the area the previous day.

Blazing a trail through Southern coastal towns, the saffron army’s next target was a Jumma mosque in the Vettumakana Junction in Kalutara. Incensed by their reception in Maggona, the Sinhala Ravaya marchers got unruly near the mosque according to witnesses but the police managed to contain the problem.

Success at Temple Trees
The Sinhala Ravaya marchers arrived in Colombo on Wednesday morning but despite warnings issued by police officers to meat vendors in Bambalapitiya and Colpetty, no incidents targeting these shops were reported in the capital. The Kataragama-Colombo foot march calling for a state enforced ban on cattle-slaughter that is in truth a poorly disguised attempt to target the minority Muslim community, ended at the door of Temple Trees, where the group’s leading monks met with President Mahinda Rajapaksa last afternoon.

According to the monks who spoke to the media following their meeting, President Rajapaksa had promised them that legislation banning the killing of cattle would be introduced to the country within two months. Needless to say, these campaigns have the regime’s tacit support, with many senior members of the administration being ardent vegetarians and openly expressing an abhorrence of the slaughter of cattle for consumption.

While animal rights activists might rejoice at their causes being espoused by the powerful saffron armies pervading Sri Lanka’s political scene, it is getting harder to ignore the veiled attempts such campaigns are making to repress a trading community and their food culture.

The regime prefers to look benignly on these increasingly violent and frequent incidents targeting specific religious minorities in Sri Lanka. President Mahinda Rajapaksa, who hosted newspaper editors to breakfast last Friday (21), dismissed the growing influence of these hard-line Sinhala Buddhist groups and offered a unique prescription to neutralise them. He urged a media blackout of the incidents against religious minorities and their places of worship, saying that without the necessary publicity the hard-line groups would fade into oblivion.

It is a prescription utilised by the media in the past, senior scribes recall, when isolated misdeeds of the military in the North and the East in the late 1970s went unreported in the name of preventing communal unrest. All the while, LTTE atrocities continued to be featured widely, creating an information gap that resulted in the misinformation campaigns carried out by Sinhala hard-line groups who whipped mobs into a frenzy to take arms against innocent Tamil civilians in the capital in July 1983.

On the other hand, keeping the activities of the present-day triumvirate leading the anti-minority charge – the Bodu Bala Sena, the Sinhala Ravaya and the Ravana Balaya – keeps the moderate sections of the populace wide awake and alert to potential sparks that could ignite communal flames.

The President’s rationale on the other hand might be motivated by his Government’s desperate need to control the damage caused to its image by its own anti-minority policies, including the latest attempt to slash the powers of the provincial councils denying any semblance of political autonomy to Tamil and Muslim populations living in the North and East.

The regime’s policies have led to the mushrooming of hard-line groups, legitimised their claims and strengthened their hand in an unprecedented way. In fact, despite the President’s apparent contempt for such groups, the fact that every one of them have taken up the call for the repeal of the 13th Amendment, adding to the chorus of ultra-nationalist voices within the ruling regime including its innermost circle, means that the Government is able to manipulate the groups to doing its bidding when necessary.

The Bodu Bala Sena group for instance, which made the loudest noise and attained infamy very quickly with its regular press briefings and rallies, had slunk into the shadows since their leaders took a much publicised trip to the US in April. The Bodu Bala Sena that charged a candlelight vigil calling for an end to hate speech, harassed the protestors endlessly on social media and took to storming private homes and churches with police escorts, went strangely quiet following the Sinhala and Tamil New Year.

Many analysts believed the group had overstretched itself and operated too publicly, calling far more attention to themselves and their covert supporters within the ruling administration than other hard-line groups that had operated in the shadows for much longer following the end of the war. The traction the BBS was getting in the press and its love of publicity made it easier to associate the group with all the anti-Muslim incidents being reported.

As the Islamic diplomatic corps in Colombo mobilised and the foreign press picked up on the increasing intolerance of minority religious groups in Sri Lanka, the impunity with which the BBS was operating made for some uncomfortable questions being asked of the Government. The BBS was therefore likely thrust back into obscurity to be trotted out again as and when required. And when it comes to the repeal of the 13th Amendment, the administration needs all the help it could get to build opinion in the country against the provincial council system.