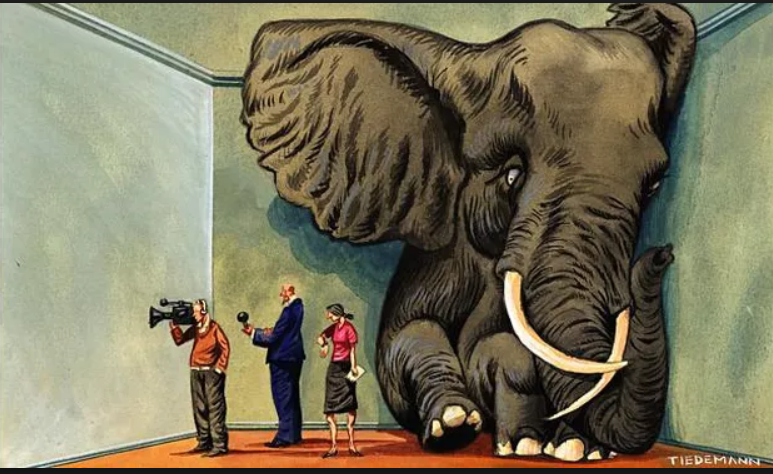 Image: The Elephant in the room is who will be the next presidential candidate of the government alliance.

This rivalry has led to political maneuverings and a breakdown of trust that has been detrimental to the unity of purpose of the government, and escalated the mistrust between the two leaders which was akin to poison to the body politic. In the current circumstances, in which the power balance has tilted towards the Prime Minister, it would therefore be advantageous if the thorny issue of the next period of presidency is decided by the two coalition partners without further delay. For instance, the failure of the government to honour its election time pledge that it would take legal action against the members of the former government has been attributed to a divide and rule strategy employed by the UNP component of the government to keep the SLFP divided, and thereby the President himself in check.

President Sirisena’s campaign to get rid of Prime Minister Wickremesinghe and replace him with someone of his own choice can be seen in this negative frame of contestation.

In the immediate aftermath of the local government elections, at which both ruling parties performed poorly, the President made his bid to sack the Prime Minister. The unfortunate lack of political foresight in this move was evidenced by the fact that the President neither had the constitutional authority to sack the Prime Minister, nor did he have the numbers in the government or in the cabinet to overthrow him. The lack of political foresight was further displayed when the President appeared to be initially supportive of the motion of no-confidence against the Prime Minister that was presented to Parliament by the opposition led by his mortal foe, former President Mahinda Rajapaksa.

It is to be hoped that the new balance of power that has emerged will enable a viable solution to be worked out. Immediately prior to the no-confidence motion, President Maithripala Sirisena had taken several other overtly offensive actions against the Prime Minister that led to the undermining of the government. There even seemed to be an element of enmity in their relationship and when they attended public events together they seemed to find it unbearable to even look at each other. In the run up to the no confidence motion, with just three days to it, President Sirisena seemed to openly enter the fray when he virtually stripped Prime Minister of some powers he enjoyed. However, the manifestations of discord between the President and Prime Minister had commenced even earlier.

President Sirisena’s prorogation of parliament until next month came amidst a crisis facing the SLFP he leads, with 16 dissenting members, including six cabinet ministers, saying they would leave the government which would further weaken the position of the President within the government. There has been speculation that they might even cross over to the former President’s camp. The suspension of parliament will give more time to the President to attempt to prevent the further disintegration of his party. In addition, prorogation of parliament means that all parliamentary committees will need to be reconstituted. In a context in which the UNP led by the Prime Minister has emerged stronger, the prorogation is clearly to the UNP’s advantage when it comes to deciding on the leadership of those parliamentary committees.

The parliamentary battleground is therefore set for constitutional reforms that could sustain the government into the post-2020 period. The tussle over who should be the presidential candidate on the government side could be resolved by reforming the presidency to be one that is elected by parliament and with reduced powers as a transitional provision in the constitutional reform process. It is best that this new arrangement is negotiated and settled sooner rather than later. If the all important relationship between the President and Prime Minister is to be improved, and sustained, there should be no room for rivalry and mistrust about the future between them. Ideally the dissenting 16 members of the SLFP should be part of the process of inter-governmental reconciliation.

Together they need to take forward the Government of National Unity, and prove to a sceptical public, that this is the best thing that has happened to the country despite its many problems.