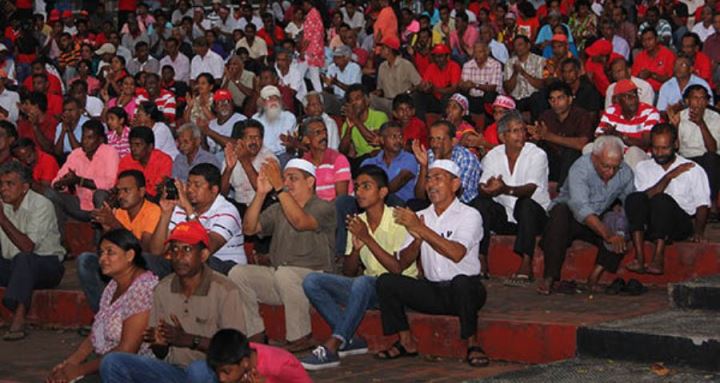 We Must Fight For A Radical Change In Society by Tamara Kunanayakam —
I’m here because I’m Sri Lankan, and I’m here because I’m proud to be Sri Lankan! I’m also here because separatism and partition will not resolve the problems that we face. I am convinced that only a people united can combat exploitation and injustice and can defend the hard-won sovereignty and independence of the country that is under threat.

I salute the Young Socialists Union for organising this very timely Rally for Unity to commemorate Black July 1983, an event that can be described as one of the darkest pages of Sri Lanka’s recent history.

Today, 31 years later, and after 26 years of a bloody war against separatism that it set off, we are facing a renewed threat to peace in the country as the spectre of Sinhala Buddhist chauvinism raises its ugly head once again!

Today, as in 1983, there are attempts by politicians to divide the people on ethnic, religious, cultural lines so that they can stay in power.

Today, as in 1983, there is growing criticism and anger at rising social injustices, at the arrogance of the rich and the corrupt, at the rising foreign debt that must be repaid by ordinary people, at the abandon of our sovereignty and independence.

Today, as in 1983, there is growing rejection of the regime in place, a regime that has betrayed the people, and now – to stay in power – it is ready to betray them again.

And, today, as in 1983, there is an attempt to divert attention from the real issues by finding a scapegoat, and to divide the people with the sole aim of staying in power. Let us recall that in 1980, less than three years before Black July, the then JR Jayewardena regime, faced with rising discontent and a General Strike that resulted in some 140,000 public sector employees being fired, suddenly turned up with the Tamil scapegoat! The rest is history!

It is clear that the regime that won the war against separatism has failed miserably to win the peace!

People are being asked to continue to tighten their belts and to make sacrifices. The cost of living has increased and real wages have declined. Privatisation and liberalisation has brought public education to the verge of collapse, the public health system is a shadow of what it used to be, and the public transport system has become dilapidated, expensive and dangerous.

The present regime has continued to impose the very same neo-liberal policies of the Jayewardena regime that were responsible for Black July and for the 26 years of war that followed.

The present regime has continued to benefit from a Presidential System that concentrates power at the top, undermines parliament, makes political parties redundant, and makes possible the continued exploitation and suppression of the working class and the progressive forces.

Let us remember that in 1977, it was the Presidential System that made it possible to privatise public enterprises and services, to liberalise markets, to introduce an export-oriented economy based on huge external borrowings, to criminalise the working class movement and the left forces, and to divide the country on ethnic lines.

Today, the country is being sold to multinationals – such as Monsanto – which deprive the people of their livelihoods, rob the country’s productive resources, pollute the environment and poison the people (as we saw in Rathupaswala), and increase our dependence on decisions made outside the country.

Daily, people are being asked to make new sacrifices so that tomorrow will be a better day. And, there is a lot of talk about growth. The question is for whom?

The masses are being impoverished. Showpiece unproductive mega projects on borrowed money dot the economic landscape, with no jobs being created. A privileged minority is accumulating tons of wealth with massive pay-offs, commissions and kickbacks, and Sri Lanka is becoming the play ground for the ‘nouveaux riches.’ Last month alone, forty S400 Mercedes Benz luxury vehicles were registered.

Recently, Sri Lanka opened a Bank of Ceylon Branch in the Seychelles. According to the Central Bank Governor, it will be a platform for Sri Lankan investors in Africa!

If it wasn’t so serious, it would be a joke! We all know that Sri Lanka has very little trade with Africa, and even less political relations and diplomatic representations. Our foreign policy makers consider Africa too poor to be of any use to us! What then is behind this sudden interest in the Seychelles? The answer may be, “It is a well-known money-laundering hub!”

The time has come to listen to what the people want – the right to live and raise their children in peace in their country of birth, not in a foreign country as second-class citizens.

More and more people are demanding that their voices be heard, and the regime needs scapegoats to divide the people. And so, yesterday, they came for the Tamils, today, they are coming for the Muslims! If we don’t act now and fast, tomorrow they will come for the rest of us and there will be nobody left to protest!

Under fascist Germany, a great German intellectual once said,

“First they came for the Communists, and I did not speak out— Because I was not a Communist,

Then they came for the Socialists, and I did not speak out— Because I was not a Socialist,

Then they came for me—and there was no one left to speak out.”

The regime has capitulated to greed and power. We see this in its economic and social policies, we also see it in its foreign policy. It is significant that, under the pretext of preserving sovereignty, the regime has capitulated to Washington and established a so-called “independent” panel of experts who have directly participated in the dismantling of Yugoslavia and imposition of the Kosovo-model elsewhere, as they are now trying to do in Syria!

It is time that the people take their future and the country’s future into their own hands!

If a just peace is to be found, then we must end all exploitation, injustices, and inequalities.

We must combat all forms of division, we must unite all the patriotic forces in the country, irrespective of religion or ethnicity. Reconciliation is not an issue solely for Tamils, or solely for Muslims, or solely for the Sinhalese. It is an issue for ALL Sri Lankans. We must think and act AS Sri Lankans!

The struggle must be conducted at every level – at the factory, in the village, in the community:

• We must fight for a radical change in society – for radical changes in policy and structure that will unite all people on the basis of complete equality and the elimination of privileges for any single group;

• We must fight for a society that is based on people and solidarity – not markets, profit, and competition;

• We must fight for an economy that is based on the needs of the people, not the needs of capital or the privileged few;

• We must fight to eliminate the endemic corruption, nepotism, and inequality inherent in the cut-throat competition of capitalism;

• We must fight for new institutions, a new Constitution, and put a definite end to the Presidential System, this permanent coup d’etat;

• We must ally ourselves with progressive forces around the world, to fight imperialism.

I would like to express our solidarity to the Palestinian people, particularly to the people of the Gaza, in their resistance against the criminal, racist and Zionist regime of Israel.

Like us, the Palestinians are fighting to defend their unity.

Let us demand the Sri Lankan Government to come out of its hiding place and express more than a timid criticism of the genocide that is taking place in the Gaza!

Let us demand that it join with others internationally to organise the isolation and boycott of Israel!

Let us demand that it withdraw Sri Lanka’s Ambassador in Tel Aviv with immediate effect!

May I conclude by quoting from the 1793 Declaration of the Rights of Man and Citizens of the Great French Revolution:

LONG LIVE UNITY AMONG ALL PEOPLE OF SRI LANKA!

LONG LIVE INTERNATIONAL SOLIDARITY!
(This  article is based on the speech delivered by the writer yesterday in Colombo and first appeared in the Sri Lanka Gaurdian)