Post-Mullivaaikkaal governance in Sri Lanka: Towards a totalitarian state 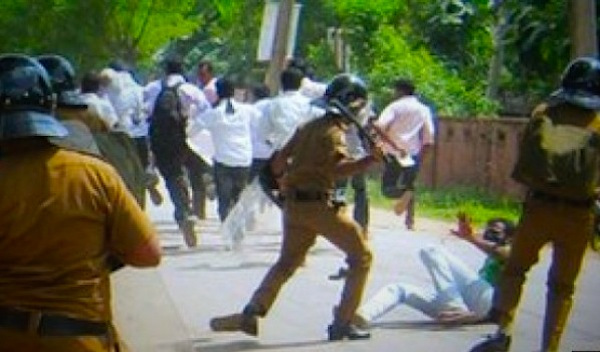 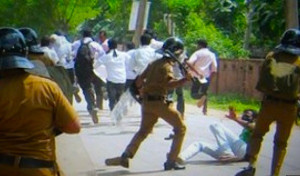 Image courtesy Lanka Standard
The present crisis engulfing the Jaffna University may be a turning point for the Tamil politics and Sri Lankan politics at large. There are three important issues, I would like to deduce from this stalemate, which are necessary to gauge the trajectory of post-war Tamil politics in Sri Lanka. Two of those issues are very familiar ones, that is because of the very reason, in Sri Lanka we have had repeated failures in achieving a dignified political settlement in the past. And the third one is an entirely new and alarming phenomenon that is unique to the post-Mullivaaikkaal governance structure of the Sri Lankan state.
This new governance is misleadingly called as ‘militarization’ in the popular discourse without realising the conceptual and theoretical elucidation. Obviously, I would like to dwell in the third one in detail after a brief sketch of first two issues.

Firstly, this crisis will lead to the delegitimization and destruction of Tamil moderates in politics. Throughout the post-independent Tamil politics, Tamil moderates were electorally destroyed, during the first half of the history and during the second half, they were physically destroyed by the Tamil militancy. (I have dealt in detail about this particular aspect in this piece [1]). This is a very familiar story; successive governments in Colombo have let down the moderate Tamil politicians and they were never given a dignified solution to this protracted ethnic conflict. Presently TNA is having same old problem and its legitimacy has consistently been eroded by each and every crisis affecting Tamil population in Sri Lanka. On the one hand, Sampanthan and his cohorts have to deal with a deceitful regime, and on the other hand, they have to convince the exhausted and traumatised Tamil electorate that they can deliver a dignified political solution via political negotiations. Since the eruption of this crisis in Jaffna University, the TNA seems to be losing its grip and leadership in Tamil politics. Its first reaction was somewhat confused one and merely followed the protest momentum of the TNPF led by Gajan Ponnambalam, parliamentarian Mavai Senathiraja’s slothful body language at the Jaffna protest, organised by the TNPF, itself was a clear indication that the TNA is not comfortable with the idea of protest. The lacklustre protest organized by the TNA, at the Chelvanayakam memorial site, on 21st of December, has wittingly or unwittingly revealed the TNA’s internal contradictions among its constituent parties. Hence, any escalation of Jaffna University crisis can further delegitimize the TNA in the eyes of Tamil people.

Secondly, current stalemate, where both parties are not ready to blink first, can lead to a potentially serious situation, some thing similar to early 1980s of Jaffna University, which had all the elements of bursting into a full blown Tamil militancy. The Jaffna University has been the hotbed of Tamil nationalism since its inception and it has played a very forceful role in shaping the Tamil politics since late 1990s. Post-Riviresa Jaffna University’s open confrontation with the Sri Lankan army came to the fore during the weeks preceding the fall of Elephant Pass army garrison in 2000, when the army was holding the civilians of Thenmaratchi region, as human shield to thwart the LTTE heavy weapon usage. Eventually, the army led the civilians to leave as the pressure grew on them to release the civilians from the war zone. Since then, the Jaffna University has been at the epicentre of Tamil nationalist resurgence in the form of Ponguthamil events and many other mobilisations, e.g Jaffna University students played a crucial role in TNA’s excellent electoral performance at 2004 General election. The resurgence of Tamil nationalism in Post-Riviresa Jaffna University took place when the LTTE was on the rise militarily and the army was on the back foot, losing large swathes of territory to the LTTE. The present confrontation is taking place in a critically transformed politico-military context: this time there is no more LTTE, at least in the form of an organized military force. The present period – aftermath of the LTTE defeat – epitomises the extreme vulnerability of Tamil life in Sri Lanka – politically and physically – since the independence from the British. The Sri Lankan state’s humiliating and totalitarian approach will further alienate the Tamil population and students into indignation and resentment. Therefore, we have every reason for to be concerned about the present situation, because it has every potential for a renewed violence and destruction. Thus the present stalemate has critical implications, to the very fabric of the Jaffna University as a core institution of Tamil national life and to the Tamil politics as a whole.
Thirdly, we are witnessing an alarming new development in the governance and management of the population in Sri Lanka, though the new development has serious implications for every section of the society, but it poses a grave danger to Tamil-way-of-life in the island than any other ethnic or religious groups. The Sri Lankan security establishment’s rationale for detaining four Jaffna University student leaders for “intense rehabilitation” – because of their involvement in “activities symbolized the return of former LTTE Leader V. Prabhakaran” [2] – epitomizes the new governance approach in post-Mullivaaikkaal Sri Lanka. Amidst the confusion over the legality of security establishment’s actions, their claim that those “four undergraduates agreed to be rehabilitated willingly” [3] is ominously indicative of the Orwellian proportion of the new governance and administratory approach in Sri Lanka.

According to the online Oxford Dictionaries website, the word rehabilitation/rehabilitate is described as “restore (someone) to health or normal life by training and therapy after imprisonment, addiction, or illness”, therefore one is expected to presume that those four students are under going “intense rehabilitation” for expressing certain ideas and convictions regarding Tamil identity and Tamil politics, which are deemed incompatible in post-Mullivaaikkaal Sri Lanka. Presently, the Tamil-way-of-life in Sri Lanka is at its most vulnerable state, politically and physically, since 1948. Post-Mullivaaikkaal Sri Lankan state’s approach to Tamil politics – with the knowledge that the Tamils can wage a deadly insurgency against the state – has been singularly focused on preventing the emergence of a future Tamil militancy rather addressing the legitimate political aspirations of Tamils. This explains the military’s embedded nature in Tamil life throughout the Northern and Eastern provinces and the military has succeeded in making itself an integral part of the vulnerable sections of the Tamil society. This is generally described as militarization in the popular discourse.
It is important to dwell in detail on the often-stated topic of ‘militarization’ in Sri Lanka and in particularly North and East of Sri Lanka. The difficulty with the jargon like ‘militarization’ is that it is ill defined and it is being used in many different contexts. Prof Martin Shaw writes:

‘Militarization’ is actually used in a variety of senses, describing many divergent realities, and it could be argued that the concept is very much an ideological tool of anti-militarist analysis – used to cover a variety of aspects of military power which cause concern – rather than a scientific concept. [4]

Even though, scholars like Jonathan Goodhand and Rajesh Venugopal have used the term ‘militarization’ in relation to Sri Lanka, but their usage of the term was highly contextualized ones. Generally in social science, militarization or militarism is meant to describe ‘war build-up’ or ‘war preparation’ at the societal level. The principal problem with the usage of the jargons like militarization or militarism in the context of post-war military administration of North and East of Sri Lanka is that it gives a completely misleading picture of Tamil civilian support for the state and the security establishment. Militarization and militarism are used in the context of a homogenous national culture, where the society is being mobilized by the state for war-effort; thus, we have seen the militarization of Sinhala society by the Sri Lankan state and the militarization of Tamil society by the LTTE. It is completely nonsensical to use the term militarization for the present military administration of the Tamil population in North and East of Sri Lanka. There is already a well established terminology exists in public-sphere to describe the current state of affairs in North and East of Sri Lanka, that is, Occupation (being occupied). The jargon, militarization, may be more sensational to use in public discourse but it gives a completely misleading picture of what is happening in North and East of Sri Lanka.
This new Orwellian governance in Sri Lanka came into the existence since the end of war in May 2009, when the Sri Lankan state had achieved monopoly of violence throughout the island, first time in the post-independent history. At the outset of independence in 1948, the new state – inherited by the Sinhala elites – never had the legitimate-approval from all the sections of the population and that paved the way for a violent insurgency later. Still the state is lacking of political legitimacy and approval from the Tamils. Therefore the Sri Lankan state’s stability sits delicately on three factors, Sinhala-Buddhist totalitarian political discourse, surveillance-state and the complete military subjugation of Tamils. The Sri Lankan state’s disproportionate response to the Jaffna University students’ act of defiance amply illustrates how the state is squandering its newly found monopoly of violence.

Many international and multilateral agencies are complicit in this post-Mullivaaikkaal governance of administrating Tamil population; particularly agencies like International Organization for Migration (IOM) and the UN Office for the Coordination of Humanitarian Affairs (UNOCHA) are guilty of being complicit in the military subjugation of Tamils. Despite the murky legal status of the Presidential Task Force (PTF) for Resettlement, Development and Security in the Northern Province, the UNOCHA has become a willing partner in PTF’s politicized resettlement programme in Northern province. It is worth sharing this information here, during the refurbishment of Vavuniya General Hospital, the unwritten criteria for the recruitment of masons for the project was, one’s ability to communicate in Sinhala language, because, the supervising engineer cannot communicate in Tamil. Therefore many Tamils with building construction skills were denied of employment, simply because they couldn’t communicate in Sinhala language. This is typical of the situation in Northern province, where the UNOCHA is presiding over an inhumane resettlement and development programme, which has no sense of security.

In this backdrop, the continuing subjugation and humiliation of Tamil population will invariably lead to the worsening of ethnic crisis and the delegitimization of Tamil moderates in politics. The extremist elements from both sides have no qualms about exploiting violence and human suffering for political outcomes, therefore the highly charged Jaffna University crisis can easily be escalated into a full-blown violent crisis.
Reference
[1] http://groundviews.org/2011/01/14/some-reflections-on-reading-dayan-jayatilleka-and-dharmeratnam-sivaram-taraki/
[2] http://groundviews.org/2012/12/10/updates-on-ground-situation-in-jaffna/
[3] http://www.colombopage.com/archive_12B/Dec21_1356072353CH.php
[4] Shaw, M, Post-Military Society: Militarism, Demilitarization at the End of the Twentieth Century (Cambridge: Polity Press, 1991).
– Courtesy – Groundviews