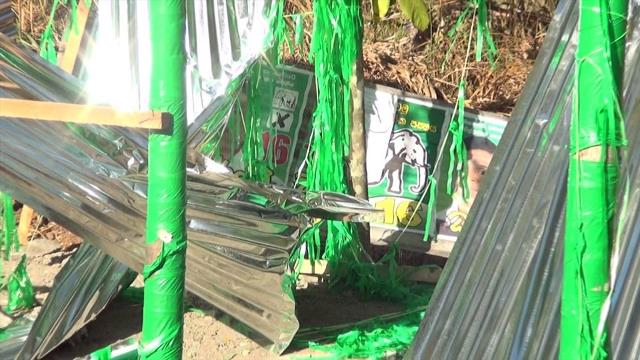 [UNP has been targeted in post election violence]
Uva Provincial Council Elections 2014: Communiqué on 9 Incidents of Post-Election Violence
By CMEV-

The Centre for Monitoring Election Violence (CMEV) has been informed of 9 incidents of violence after the conclusion of the Uva Provincial Council elections held on 20th September 2014. The incidents reported to CMEV include incidents where UPFA supporters were involved in making threats to and/or damaging property of opposition candidates (particularly JVP and UNP). CMEV is concerned with the ongoing violence and the lack of accountability for it, which denotes the prevailing culture of impunity.

CMEV is especially concerned by the incidents that transpired in Mahiyanganaya. A significant number of incidents were reported from the day of nominations to the post-election period. All three independent election observer organisations: CMEV, Campaign for Free and Fair Elections (CaFFE) and People’s Action for Free and Fair Elections (PAFFREL), issued a joint statement highlighting these concerns.

Following pre-election violence that transpired in Mahiyanganaya, the Election Commissioner, at a meeting held on the 10th September requested that the Inspector General of Police (IGP) takes necessary measures to respond to the situation and to take pre-emptive measures against any outbreak of violence. The IGP thereafter deployed 30 STF personnel to the area. CMEV learns that the STF personnel were withdrawn a day prior to the election redeployed on Election Day and withdrawn once more soon after the election.

These measures are contrary to what the IGP agreed to at the meeting convened by the Election Commissioner on 10th September where he gave an undertaking that the Uva province DIG would provide security to opposition parties and take steps to prevent violence in the remainder of the campaign, on Election day and the post – election period. CMEV condemns continuing violence and urges all law enforcement agencies and political party leaders to take necessary measures to prevent further violence and to take action against those who are involved in and complicit in such violence.

Following are some of the incidents recorded by CMEV in the post-election period:

Attack on the residence of JVP Provincial Council candidate

The residence of JVP Uva Provincial Council candidate P. P. G. Wijesiri was attacked by an unidentified group at 12.30 a.m on the 22nd September. The said residence is located at Singhasiripura, Madurukatiya, Kumbukkana in Moneragala District. Subsequent to switching off street lights, the attackers shattered three windows and partially damaged a room. Mr. Wijesiri has lodged a complaint (No. 51) regarding the incident with the Moneragala Police. When contacted by CMEV, the Moneragala Police Division- Election Operation Centre confirmed that the incident was recorded.

Roy Kalinga, former opposition leader of Wellawaya Pradeshiya Sabha and candidate of the UNP for the Uva Provincial Council, was assaulted by an unidentified group using clubs at his residence in Athili-wewa, Dambarawa, Wellawaya on the 22nd September. The group arrived in 2 white defender vehicles at 2 a.m and also attacked his vehicles. He was subsequently admitted to the Sirigala hospital in Moneragala and is being treated at ward No. 02 (photos available). The hospital confirmed that 2 persons were admitted and the condition of Mr. Kalinga is not serious. Mr. Kalinga’s spouse lodged a complaint (No. 52) on the incident with the Wellawaya police. When contacted, Moneragala Police Division- Election Operation Centre confirmed that the incident was recorded.

Attack on the residence of JVP Provincial Council candidate’s father

The residence belonging to the father of JVP Provincial Council candidate W. M. A. K Wickramasinghe Bandara was attacked by an identified group at 12.45 a.m on the 22nd September. The residence is located at Obbegoda, Dambagalla, in Moneragala District. When contacted by CMEV, Mr. Bandara claimed that the attack was due to his father’s involvement in his election campaign. The Moneragala Police Division- Election Operation Centre confirmed that the incident was recorded as complaint No. 53.

R.M. Gunathilaka, supporter of UNP Provincial Council candidate Harin Fernando, was assaulted at his residence at midnight on the 20th September subsequent to threats made at 7 p.m allegedly by a group of persons led by vice chairman (UPFA) of Badulla Pradeshiya Sabha. A complaint regarding the incident has been made to the Badulla Police.

Attack on the vehicle of UNP Provincial Council candidate

Following news that the UNP party office in Hali Ela was set on fire, UNP Provincial Council candidate Harin Fernando and supporters were rushing to the area when an armed, unidentified group stoned the vehicle convoy. The incident took place around 5 p.m on 22nd September when the convoy was passing Hali Ela junction. 3 vehicles were damaged in the incident but no casualties were reported. A spokesperson for Mr. Fernando claimed that the Badulla Police took almost 2 hours to take the complaint.

The situation subsided without further violence or damage caused by the sharp weapons that were carried by the mob, due to the Police being deployed to disperse the mob. The incident took place in an area with a heavy Muslim population. The community was apprehensive about the violence. Mr. Fernando has informed CMEV that the mob blamed villagers of Hali Ela for UPFA electorate’s defeat. Mr. Fernando further informed CMEV that UPFA Badulla district MP Dilan Perera was amongst the mob. CMEV could not reach Mr. Perera for a statement.

During the incident, a journalist from the Lankadeepa newspaper, Chandana Kuruppuarachchi, was attacked by the mob. He claimed that the mob chased him for a distance of almost 1km and pelted stones at him. He was admitted to the Badulla hospital with a few broken teeth.

Attack against the Supporter of UNP Mahiyanganaya Organizer

CMEV received reports both from the field as well as through a complaint made by Upali Senaratne, UNP organizer for Mahiyangana electorate, that politicians were threatening opposition supporters in the Mahinaganaya area.

One incident was recorded at 7 p.m from Adaulpatha, Redeemaliyadda, Mahiyanganaya, where the driver of Mr. Senaratne’s, Chaminda Sampath, was allegedly attacked by supporters of UPFA MP for Badulla district, Thenuka Vidanagamage. He was later admitted to the Badulla hospital.

Another incident was recorded from the same area. Mr. Senaratne alleged that a three-wheeler belonging to Priyantha Kumara, one of his supporters, was damaged by UPFA supporters on the 22nd September.

This incident took place in the presence of ASP S. Wedamulla from the Mahiyangana Police division. When contacted by CMEV, Mr. Vidanagama claimed that these were false allegations. He directed any further inquiries to the Mahiyangana Police who he claimed was conducting an impartial investigation into the complaints.
By Centre for Monitoring Election Violence /25 September 2014