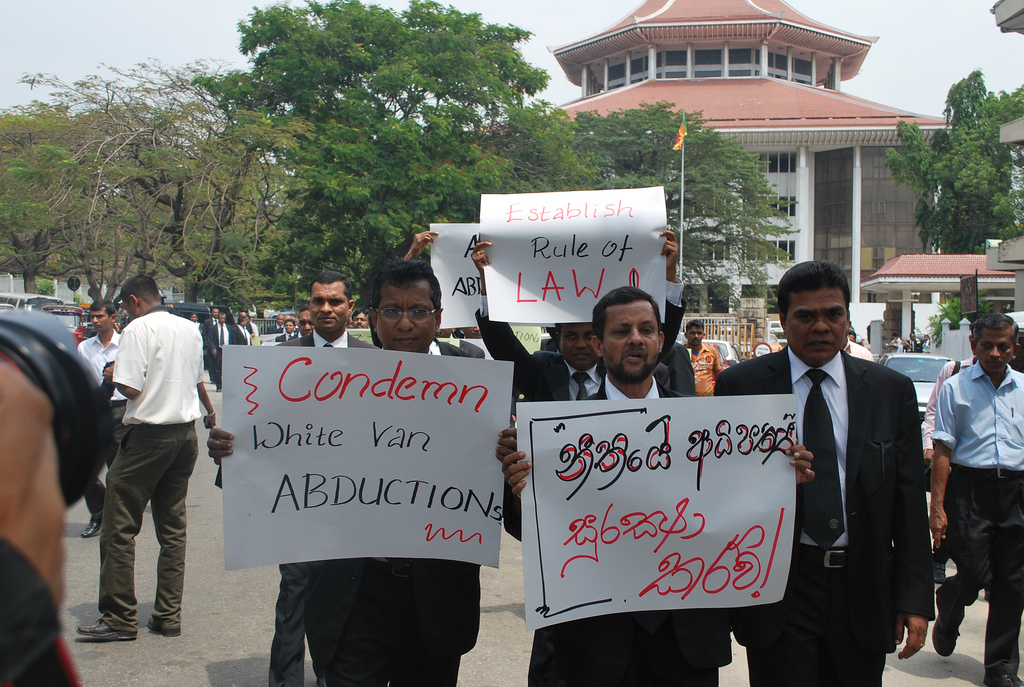 by Kishali Pinto Jayewardene
Dictators do not believe in half hearted measures. This is an essential lesson that Sri Lanka is now learning at a painful cost.

We were immeasurably too ignorant, too consumed by self interest or too stubborn to realize this until it was too late.

Dismal reality of the absence of law
This week, as President Mahinda Rajapaksa locks horns with the country’s Judicial Service Commission (JSC) over a few incredibly minimal demonstrations of judicial independence, these lessons assume great significance.

This is so, not only for judges and lawyers. Indeed, such reflection is vital if we wish to live in a country where basic law and order prevails, whether high constitutional governance or pedestrian land and traffic disputes are concerned. And to be perfectly clear, we fail miserably in that regard.

Spiraling crime, politicians, political brats and their thugs who commit mayhem, the corresponding breakdown in law and order, uninvestigated attacks on medical personnel, the exponential increase in land frauds, rapes of children and women by local government politicians who are generally let off on bail together with almost daily protests by farmers, trade unionists, university teachers and students among others, bear this out.
Gleaming new roads, spruced up cities, perennial cricket matches and mushrooming five star hotels cannot quite hide that uncomfortable fact.

Drawing a line with the past
Meanwhile the dictatorship that predominates in the guise of the Executive Presidency is characterized by a singular inability to tolerate even the barest squeak of collective protest. Where attacks on the judiciary are concerned, comparisons with the past are commonly made.

As President Mahinda Rajapaksa is fond of pointing out, under the Presidency of the United National Party’s JR Jayawardene in the early eighties, judges’ houses were stoned and judges were abused by political thugs. The President called this to mind most recently in the wake of the attack on the Magistrate’s Court of Mannar in which one of his Ministers is allegedly implicated but still continues to roam freely.

However there is a classic difference between then and now. Then, the executive attacked a Court which had confronted political arrogance head-on through its judgments protecting civil liberties. Legal practitioners and the legal intelligentsia resisted and at some point, a decade or so later, the judicial system reasserted itself.
We got accustomed to this reassuring swinging to and fro of the constitutional pendulum, however bad the times may have been.

This also showed that the country’s democratic systems, even though severely threatened, could still be rejuvenated. But can we say this now? This is where a line is most surely drawn with the past. The comparisons have become unbearably stifling as they are simply not correct.

Pressure points of minimal independence
Let us see precisely as to what led the state media to relentlessly attack the Chief Justice currently, pro-government demonstrators to converge outside Parliament against a Supreme Court Determination and (reportedly) a Presidential summons to the JSC to be issued.

This last report is perhaps the most outrageous indication of all that we have crossed the Rubicon as it were, in relation to the independence of Sri Lanka’s judiciary. The Secretary to the JSC’s public statement that it would resist political interference indicates the tremendous pressures that are at play here.

Yet what are the pressure points at which such anger was occasioned? This is a good barometer of where we are on the democratic scales. Reportedly the adverse reaction commenced with protests by judges against the attack on the Manner Court and was aggravated with the Determination by the Supreme Court on the Divineguma Bill directing that the Bill ought to be referred to the Provincial Councils for approval.

These two examples show the extremity as well as the enormity of the current crisis. In the first instance, this was an actual attack on a Magistrate’s court by a mob allegedly instigated by a Minister in regard to which no effective action has yet been taken.

What was the judiciary supposed to do? Sit back and applaud? It did what it had to do in the minimum to protect even the veneer of judicial independence; it called for some action. Crucially, it did so defensively, not proactively.

Completely disproportionate government reaction
In the second instance, when the Supreme Court determined that the Divineguma Bill should be referred to the Provincial Councils, this too was a procedural caution. The Court had similarly ruled in the past, even under this very same Presidency where matters within the purview of the provincial councils were sought to be passed at the Centre without approval at the provinces.

Where the government holds the balance of power in the provincial councils, complying with this requirement is a technicality. That this procedure was not adhered to in this instance only points to a lamentable lapse on the part of the Government’s legal advisors, state and private.

Yet the enormity of the executive anger, which was completely disproportionate to the judicial positions taken in these two instances, shows us that there can be no half hearted measures here. That is the clear message.
Even the tiniest show of defiance will invoke the full wrath of those in virtual kingship. These are good lessons that we do not need a Commission of Inquiry to teach us

Shamefully obsequious public reaction
Post-war, the general assumption in the South was that, (however oxymoronic this may sound), a little bit of dictatorship may be beneficial. Violations of human rights in the war theatre were brushed aside. Professionals and academics openly supported Mahinda Rajapaksa in his electoral campaign.

The more credulous mooted the conferring of honourary doctorates on the President and his brother the Defence Secretary in thanks for the ending of the war. Except for some horrified howls of protest, the 18th Amendment to the Constitution was welcomed as installing a munificent ruler distributing largesse to a suppliant and obsequious population.

I recall gently remonstrative reactions for example when a column in these spaces called upon the discerning to rage against the dying of democratic institutions brought about by this truly obscene Amendment.

Facing a rude awakening
Earlier, when the 17th Amendment was deliberately dismantled piece by piece to make way for the 18th Amendment, the Bar watched silently.

Worse, retired judges and lawyers accepted unconstitutional Presidential appointments to commissions which lost their core integrity. This was eerily similar with what prevailed during the Sarath Silva Court (1999-2009) when many consciously looked away from profound judicial injustice, save for a few honourable exceptions.

Lawyers profited by the former Chief Justice’s intemperate actions and then were unseasonably aggrieved when in true Sarath Silva style, their debts to him were turned against them in later years. Many would contend that this is the same style of Presidential rule that we are seeing now.

Cumulatively however, there is little doubt that Sri Lanka’s judicial system is well and truly in crisis. For those hitherto blinded by self-interest, this is a rude awakening. The time for issuing defiant resolutions or statements is long past.

There must be a popular movement of legal professionals fighting for the very survival of the judicial institution, much in the manner of the university teachers’ struggles for the protection of the country’s education system. This and this only will stem the inevitable tide.