= Opposition parties and polls monitors accuse UPFA of using even Kapilavastu relics as election propaganda
= As three provincial councils go to the polls in five days, officials of the Department of Elections are fanning out to different districts to probe polls law violations and ensure a free and fair poll. Most officials have gone to the Anuradhapura district where complaints of polls law violations were the highest.

As the election campaign in the North Central, Eastern and Sabaragamuwa provinces reaches its peak ahead of next Saturday’s elections political parties and candidates are making a desperate effort to attract voters.
From the ancient kingdom of Anuradhapura to the gem city of Ratnapura, candidates of various parties reportedly violated elections laws in a blatant manner.

Some candidates are making use of the prevailing drought conditions to collect votes by offering compensation to farmers and others have even been accused of making use of the hallowed Kapilavastu relics for political purposes.
Despite election laws and a code of ethics for candidates and political parties and repeated requests by Elections Commissioner Mahinda Deshapriya, for the candidates to abide by them, election law violations were widespread with the misuse or abuse of state property and human resources being the main offence.

By Friday, more than 290 complaints had been received by the Elections Secretariat. Of these, more than 240 related to the misuse of state property and illegal display of banners, cutouts and posters. The majority of 80 complaints were from the Anuradhapura district followed by 60 from the Ampara District and 40 from the Kegalle district. The lowest was from the Polonnaruwa district.

According to the monitoring group, the Campaign for Free and Fair Elections (CaFFE), in the drought stricken North-Central Province, water pumps, dry ration and mammoties were offered to woo the farming community.CaFFE spokesman Keerti Tennakoon said the items, stored in the Galnewa, Thalawa, Mihintale and Thirappane pradeshiya sabha buildings had been distributed by candidates or their supporters.

He said his group had also informed the Elections Commissioner of letters being sent from members of Parliament from the Anuradhapura and Kegalle districts, misusing their privilege of free postage to promote candidates.
Speeding vehicles bearing numbers and posters of candidates with loud speaker systems installed in some were seen in the Anuradhapura, Polonnaruwa, Ratnapura and Kegalle districts. Most of these motorcades were seen in Anuradhapura, Kekirawa, Mihintale, Medawachchiya, Horowpathana areas in the NCP.

Complaints from monitoring bodies and civil rights groups on continuous election law violations by the ruling United People’s Freedom Alliance (UPFA) are increasing and may go up further as the Wednesday midnight deadline for the campaign draws near.

In one of the most serious incidents, a doctor attached to the Anuradhapura Teaching Hospital was assaulted by a group of UPFA supporters who were putting up cutouts on Wednesday.

Dr. Chamila Herath is now receiving treatment at the neuro intensive care Uunit of the Anuradhapura Hospital.
Anuradhapura district’s Additional Elections Commissioner K.G.S. Madhawa said more officers would be deployed and monitoring would be strengthened in the coming days as they believed election law violations would increase.
Meanwhile, more incidents of violence were reported in the Eastern Province. A vehicle belonging to a female candidate was partially burnt by an unknown group. On Thursday, the Akkaraipattu Sri Lanka Muslim Congress (SLMC) district coordinating office was attacked by an unidentified group.

On Wednesday, an SLMC meeting in Akkaraipattu was attacked and electricity supply was disrupted by using bicycle chains.

CaFFE has also complained to the Commissioner on the use of a Water-Board circuit bungalow for election purposes by Minister A.L.M. Athaullah.

Commissioner Deshapriya said he has taken steps to prevent the misuse of state property. The sealing of three Anuradhapura stores used by former Chief Minister Berty Premalal Dissanayake, who is contesting for the same post, was one of these steps. The stores had agricultural equipment, water filters and pumps with stickers bearing Mr. Dissanayake’s name.

Elections Secretariat has also informed the Public Administration and Home Affairs Ministry Secretary to prevent the use of newly recruited graduates for election campaign work in Ratnapura. 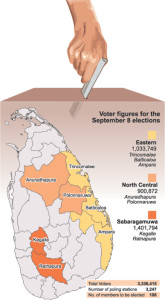 The main opposition United National Party (UNP) and the Janatha Vimukthi Peramuna (JVP) have complained that the Kapilavastu relics are being used for election propaganda.

UNP General Secretary Tissa Attanayake said a candidate from Kantale had been distributing photographs of the relic with his photograph and preference number.

Earlier this week, Minister Dullas Alahapperuma said President Mahinda Rajapaksa had given orders that propaganda material should not be distributed to devotees at the place where the Kapilavastu relics were being exposed.

Meanwhile, People’s Action Front for Free and Fair Elections (PAFFREL) director, Rohana Hettiarachchi said that even during school vacation, teachers and principals from the Anuradhapura district had been seen getting involved in election activities.

He said the use of sacred relics, religion and ethnicity to gain votes was a disturbing trend.Commissioner Deshapriya said that election meetings and propaganda activities would be prohibited after midnight on Wednesday and that strict action would be taken against those violating the law.

He said all kinds of meetings or propaganda rallies, demonstrations, musical shows and displaying of posters would be completely prohibited on September 6, 7 and 8.

In the Eastern Province there will be 1,163 polling stations, 895 in the NCP and 1,189 in the Sabaragamuwa Province.

He said more officers had been sent to Anuradhapura, Trincomalee, Batticaloa and Ampara during the weekend for pre-poll observation.

Meanwhile, police said about 21,000 police personnel, including some 123 Superintendents and Assistant Superintendents, had been assigned for special election duties. At a recent meeting with Police Chief N.K. Illangakoon, it was decided to provide police security for candidates if requested.

Ten candidates mostly from the Batticoloa district had requested police security, said.PAFFREL said it would be deploying 1,500 observers in and around polling stations and 100 mobile observation teams while CaFFE said it would deploy 1,650 observers with 100 mobile teams.

Of the 3,073 candidates, 44 are to be elected to Sabaragamuwa PC, 37 to EPC and 33 to NCPC. Unlike other elections, when photographers and video cameraman were allowed to take pictures in polling booths, this time their entry has been banned.

There will also be no foreign election monitors.

Projections by main�political parties
Public Administration and Home Affairs Minister John Seneviratne (UPFA):
“We are confident of victory in all three provinces”.

UNP General Secretary Tissa Attanayake:
“We hope to win a majority at the PC polls.”

SLMC General Secretary Hassan Ali:
“We hope to get more seats in the EP and win the Ampara district.”

Tamil National Alliance Parliamentarian Suresh Premachandran:
“We hope to win a majority in the EPC.”
ST