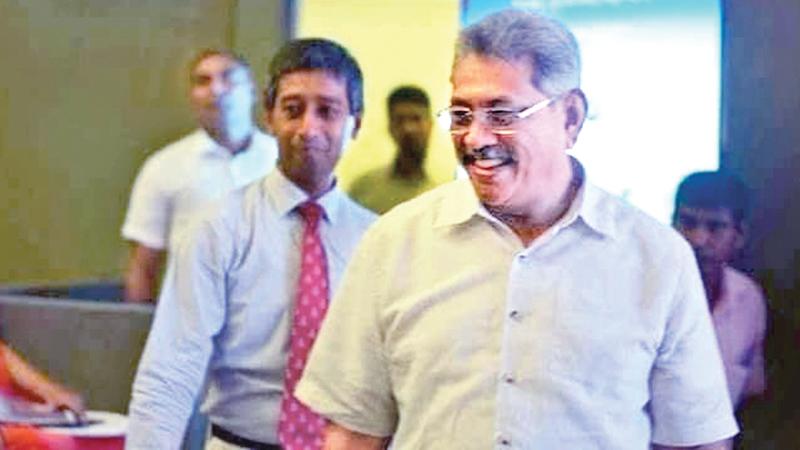 A Donald Trump supporter in Pennsylvania on QAnon, the latest conspiracy theory[i]

Politicians everywhere are amnesiacs, to various degrees. The condition probably comes with the territory, a necessary facilitator for such in stock-in-trade as lies and hypocrisy.

But total amnesia, forgetting everything one has said and done, standing on one’s head and believing that was always how one stood – that belongs in a different territory, the territory of rejecting objective reality, of living not in the everyday world, but in a world of one’s own creation.

That seems to be the direction in which former president Mahinda Rajapaksa is heading.

This week, he took the greatest leap so far into his own make-believe reality by exhorting the Government to allow independent commissions to be independent.

Months after he won his second presidential term, Mahinda Rajapaksa rammed through the 18th Amendment which abolished the independence of the independent commissions and turned them into presidential appendages. Given this clear-cut history, Rajapaksa’s latest diatribe is like Jack the Ripper pointing his blood-and-gore dripping finger at a pickpocket.

When parliamentarians tried to get their salaries increased exponentially, there was an outburst of public indignation. Dismayed, most politicians backtracked. The JO was particularly vociferous, blaming the Government for proposing the raise. The proposal, in reality, was the outcome of a rule introduced by the Rajapaksa administration in 2006, creating an unprecedented link between the salaries of parliamentarians and the upper judiciary.

Politicians do rail against other politicians for doing what they themselves have done in the past. But Mr. Rajapaksa and his cohorts seem to be headed in an entirely different direction, towards a world made up of ‘alternative facts’ (as former Donald Trump staffer Kellyanne Conway memorably phrased it). The danger of such a place is that those who occupy it absolve themselves completely of accountability. They can say and do anything, however outrageous, because they think their opinions are the facts.

In Lankan context, democracy, media freedom and even the independence of independent commissions will be what the Rajapaksas say they are.

One of the earliest sign of this departure from reality came in December 2017, in a statement issued by the former president, under his own signature, blaming the Government for not resolving the SAITM issue his own government created. The statement, a hotchpotch of lies, evasions and alternate facts, deserves to be read in its entirety.[ii]

The statement is also important for another reason; it inadvertently reveals when SAITM was turned into a do-or-die by the GMOA. Not in 2008, when SAITM started; not in 2011, when the Government of Mahinda Rajapaksa accepted it as a medical and engineering degree awarding institution via the Extraordinary Gazette No. 1721/19; not in 2012, when the Supreme Court gave the green light to the SAITM; not in 2013 when the then President Rajapaksa awarded 11 scholarships (each worth Rs. 7 million) to SAITM students using public funds. The continuous protests against the SAITM, the disruptive demonstrations and the unethical doctors’ strikes began in 2015, after the electorate sent the Rajapaksas home.

Playing with words like traitors and patriots is something one expects from politicians, or religious leaders, not from respected professionals, especially doctors. That renders doubly shocking the words of Dr. Anuruddha Padeniya, the head of the GMOA. “We have created a point scheme,” Dr. Padeniya reportedly told a Lake House journalist. “In psychiatry there is a method to identify people who betray the country. We are going to launch this list and keep it online with the materials you publish. So we can display that you are carrying out a contract.”[iii]

Is the GMOA compiling a list of traitors, using abusive psychiatric methods, the very methods used by authoritarian rulers to confine their opponents in psychiatric facilities by sticking the mentally sick label on them?

Is this what Lankan medical fraternity has sunk to?

In 1977, the World Congress of Psychiatry adopted the Declaration of Hawaii. The purpose of the Declaration is to take a firm stand against the abusive use of psychiatry for political and personal ends: As the Declaration states, “The psychiatrist must never use his professional possibilities to violate the dignity or human rights of any individual or group and should never let inappropriate personal desires, feelings, prejudices or beliefs interfere with the treatment… If a patient or some third party demands actions contrary to scientific knowledge or ethical principles the psychiatrist must refuse to cooperate.”[iv]

There are 18,000+ members in the GMOA. Do they all approve of the GMOA engaging in practices banned by the World Congress of Psychiatry?

It is highly likely that a majority of doctors go along with the GMOA out of fear. Given Dr. Padeniya’s threat to journalists, it is not hard to imagine what he and fellow GMOA bosses would do to any dissenting doctor. But the silence of the silent majority is enabling the GMOA to bring disrepute and shame on a venerable profession. When the good play Chinese monkey, the bad can become super villains. The fear of the silent majority is understandable, given the GMOA’s thuggish conduct. But by staying silent, the good and decent doctors are placing in danger the lives of people they have pledged to protect

What occasioned Dr. Padeniya’s outburst? According to The Sunday Observer, he was angry about having to admit that “only about half the private practitioners had participated in the token strike.” Incidentally, Dr. Padeniya knew that his words were being recorded and will be made public. “I know you must be recording this. That is good. Let others in your newspaper also listen to this.”[v]

What was the strike about?

One demand is that all government doctors be paid a monthly transport allowance of Rs. 100,000. The GMOA reportedly has 18,000+ members.

Another demand is a monthly allowance of Rs. 30,000 each for all medical administrators. Then there is the demand that children of GMOA members be guaranteed entrance to top level national schools.

Prof. Colvin Gunaratne called the GMOA a trade union. That is doing injustice to absolute majority of trade unions. The Mafia would be a closer analogy. The GMOA is guided not by Hippocrates of Kos (or even physician-king Buddhadasa of Lanka) but Mammon. Having become doctors at public expense, the GMOA is holding the public as hostage to gain yet more perks and privileges for its members.

Sri Lanka is one of the very few countries in the world where medical education is free. Doctors are created at public expense. The public also pay their salaries and benefits. Now the GMOA wants the public to pay even more. That would mean having to impose more taxes on an already overburdened populace.

A key structural anomaly in the Lankan economy is the complete imbalance between direct and indirect taxes – the ratio is 80:20. This grossly disproportionate reliance on indirect taxes works against the poor and most of the middles classes by pushing up prices and living costs. The Sirisena-Wickremesinghe administration promised to redress this imbalance, a promise observed in the breach until Mangala Samaraweera tried his tax reform.

The pluses and minuses of the new tax proposals are open to debate. But the need for a tax system which reduces the burden on poor and middle classes by correcting, even marginally, the gross imbalance between direct and indirect taxes is obvious. That was why the PAYE rate for those earning more than 350,000 a month was increased to 24%.

The people who have the least right to oppose such an increase are those who benefit most from the tax monies, such as doctors, many of whom would have been denied access to medical education had it not been free. Therefore, there’s something particularly noxious about the demand that doctors be exempted from this increase.

The Strong Leader as the Pied Piper

The wildcat strike by railway trade unions was a despicable action in the midst of the AL examination. But the constant strikes by the GMOA are even more despicable. No civilised society can approve of poor patients being held hostage by a mafia. No government worthy of the name should permit such outrage.

When it comes to the patriotism of politicians, Ambrose Bierce’s The Devil’s Dictionary is the go to reference. Bierce defines patriotism as ‘as fierce as a fever, pitiless as the grave, blind as a stone and irrational as a headless hen.” That perfectly describes the movers and shakers of the GMOA; their greed is as fierce as a fever, they are as pitiless as the grave when it comes to denying treatment to suffering men, women and children and they are as blind as a stone to the pain and harm they are causing. Irrational as a headless hen too, because they are heaping disrepute on a great profession by speaking like politician-thugs and acting like the Mafiosi.

The result was President Donald Trump. His election was the clearest indication that an authoritarian wind was sweeping across the entire world.

In Sri Lanka, the less immoderate, less illiberal government is in a state of semi-paralysis. The extremist and anti-democratic opposition is surging ahead. The myth that democracy is part of ‘The Problem’ (or even ‘The Problem’) rather than the least bad form of governance is ascendant. If democracy is the problem, then the solution, by definition has to be anti-democratic. This is the dangerous place to which Sri Lanka is careening.

In his Mandela Centenary Lecture, former President Barrack Obama warned, “We now stand at a crossroads – a moment in time at which two very different versions of humanity’s future compete for the hearts and minds of citizens around the world.” Obama ended his lecture by cautioning against cynicism and despair. “It is tempting to give into cynicism; to believe that recent shifts in global politics are too powerful to push back; that the pendulum has swung permanently. Just as people spoke about the triumph of democracy in the 90’s, now you are hearing people talk about end of democracy and the triumph of tribalism and the strong man. We have to resist that cynicism.”

Resistance, easy to advocate, way harder to undertake, especially when the obstacle is not repression by the Government, but our own warranted sense of disillusion. In Sri Lanka, the Government we elected paving for the triumph of tribalism and the return of the strong man. Like The Donald, we too have The Mahinda and The Gotabaya, promising to make Sri Lanka Great again, by making it a Rajapaksa-fief again.

The Good Governance government is anything but. Still, the right to criticise, to oppose remain, and occasionally achieves something worthwhile – like parliamentarians deciding not to avail themselves of a pay hike. Monk Galagoda-Atte Gnanasara has been sentenced to prison, because judicial independence has been restored to some degree. If the Rajapaksas return, one of their first tasks will be to cow the judiciary into submission again. The Independent Audit Commission has finally been sworn in. That was thanks to the 19th Amendment, which will be thrown aside, if the Rajapaksas return.

The Government tries to portray tiny advances as colossal victories. That is wrong. But there is a companion-error on our part too, focusing too much on defeats, losing sight of the small victories. In a secure democracy, that would be an affordable error. But in a country faced with the prospect of a triumphant authoritarianism, it is an unaffordable luxury, an unpardonable indulgence.