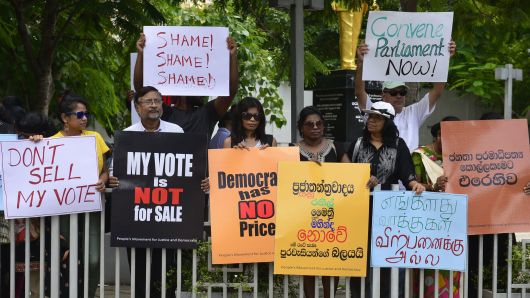 Nearly $500 million in U.S. aid and a Japanese loan of $1.4 billion have both been put on hold amid fears about the state of democracy in Sri Lanka, the country’s ousted Prime Minister Ranil Wickremesinghe told Reuters over the weekend.

That came after the European Union said last week that it may revoke Colombo’s trade privileges if the government doesn’t continue progress on human rights and Sinhalese-Tamil reconciliation. Strife between the country’s two major ethnic groups — the majority Sinhalese and minority Tamils — underlined a brutal civil war that lasted from 1983 to 2009.

“Countries are sensitive … democratic countries have concerns,” Reuters quoted Wickremesinghe as saying with regard to his dismissal.

More than a week after President Maithripala Sirisena replaced Wickremesinghe with former president Mahinda Rajapaksa, Colombo remains in a political deadlock. Wickremesinghe, who called the move illegal, refused to leave his post, essentially leaving the country with two prime ministers.

After a period of forced recess, parliament is now due to reconvene Monday. That means members of parliament will be able to hold a confidence vote on Rajapaksa but many fear the decision could be rigged amid potential attempts to intimidate and bribe officials. Speaker of the Parliament Karu Jayasuriya announced Monday that Rajapaksa would not be accepted as the new prime minister until he proves he commands a majority in parliament, Reuters reported.

“It is hard to imagine the cooperative, positive relationship with the international community continuing under a Rajapaksa government,” Jeffrey Feltman, visiting fellow at the Brookings Institution, wrote in a recent note.

While he was president from 2005 to 2015, Rajapaksa isolated Colombo from the world as a result of widespread human rights atrocities and his resistance to international investigations on war crimes. But Colombo’s global image improved in 2015 with the Sirisena-Wickremesinghe government, which was willing to work with the United Nations and address issues such as accountability and missing persons.

The International Crisis Group has called for more global pressure to punish Colombo if Rajapaksa does not receive parliamentary approval.

“Foreign governments and organisations should reconsider any economic support linked to democratic governance,” the organization said in a statement last week. “Governments should also begin to consider applying targeted sanctions against Sirisena, Rajapaksa, their families and their close associates should Sri Lanka’s constitutional coup proceed.”

The prospect of fresh violence should serve as a warning sign for Western powers.

If Sri Lanka loses the support of trading partners such as the U.S., Japan and the E.U., its already vulnerable economy is set to suffer.

The Ministry of Finance on Friday announced a slew of initiatives meant to revive the economy, including lower petrol prices and reduced levies on certain agricultural commodities. The crowd-pleasing measures are likely to boost Rajapaksa’s popularity — the newly-appointed PM is a known populist — ahead of the expected parliamentary vote.

But the fiscal relief package could also strain state finances at a time when revenues are already weak, according to economists. A day before Friday’s news, Sri Lanka’s central bank warned that Colombo may miss its budget deficit target for 2018 — 4.8 percent of gross domestic product — amid lower-than-expected income collection from import duties.

That, in turn, could impact Colombo’s three-year $1.5 billion loan program with the International Monetary Fund. Under the agreement, the island nation must implement a range of reforms that include fiscal consolidation, revenue mobilization and structural reforms on state enterprise.

Given the risk of fiscal slippage under Rajapaksa, the final tranches of IMF funds may be called into question, said Kenneth Akintewe, head of Asian sovereign debt at Aberdeen Standard Investments.

“Some of the biggest maturities are coming up next year so this [political crisis] is extremely bad timing for Sri Lanka,” Akintewe added.