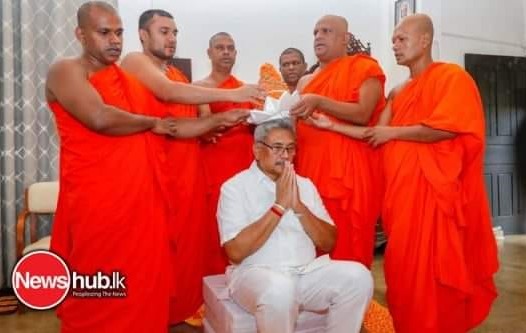 The recent verbal encounter between a Government minister, who asked those who want to live under sharia laws to go to Saudi Arabia,  and a former Muslim Governor of Western Province, who refuted the minister and maintained that one could live under sharia laws in Sri Lanka, which eventually ended in Police arresting the ex-Governor under the Prevention of Terrorism Act, illustrates how deeply and widely has political Buddhism penetrated the realm of national governance and, under the so-called one country one law (OCOL) mantra, imposes its own metaphysics on minority communities.

This is an alarming trend, which no one wants to discuss in public, and which threatens not only to destroy the very fabric of Sri Lanka’s religious and cultural pluralism, but also signals the end of what John Rawls described as political liberalism with its “political conception of justice” and “overlapping consensus”.

Political conception of justice produces fairness and overlapping consensus brings stability. In Rawls’ words: “Such a consensus consists of all the reasonable opposing religious, philosophical, and moral doctrines likely to persist over generations and to gain a sizeable body of adherents in a more or less just constitutional regime, a regime in which the criterion of justice is that political conception itself.” (John Rawls, Political Liberalism, New York: Columbia University Press, 1993, p. 15).

Political Buddhism is a 20th century avatar, although its seeds were sown in the 19th. It came into prominence during the very first Parliamentary Elections held under the Soulbury Constitution in 1947, when a group of Buddhist priests from Vidyalankara Privena appeared on election platforms to canvass support for political parties of the left.

These political bikkus, a term coined by Walpola Rahula Thera and political Buddhism they promoted are obviously foreign to the original teachings of the Buddha, who eschewed politics completely. From the 1950s however, political Buddhism spread its influence and became a crucial element in deciding the outcomes of national political contests.

The Sinhala-Tamil ethno-nationalist confrontation added further strength to political Buddhism and instilled its relevance and importance to Sinhalese leaders. After the civil war victory in 2009, political Buddhism completed its conquest of the Sinhala political mindset. Its ultimate target is to make Sri Lanka a Buddhist State in all its dimensions.

Although political liberalism with a constitutional structure was a gift by the British, the spirit of political liberalism preceded the colonial era. The political conception of justice that prevailed during the medieval period was also a product of Buddhist virtuosity infused into governance by members of the Sangha.

It was that Buddhism mixed liberalism, which produced justice and fairness which in turn brought an overlapping consensus between the ruling regime and plural entities of Sri Lankan society. That spirit of political liberalism was interrupted under colonialism until the British introduced liberal democracy on the eve of independence.

As political Buddhism strengthened its hold on national governance since 1950s political liberalism with its liberal democracy began to be weakened, and the supremacy of the former was stamped without any doubt at the two elections, one held for the presidency in November 2019 and the other to the Parliament in February 2020.

Today, Buddhist supremacists are in total control of all spheres of governance. Between the ascendancy of political Buddhism and retreat of political liberalism the overlapping consensus that existed between liberal governance and Islam started evaporating. The episode referred to at the beginning illustrated that evaporation.

Similarly, the same minister’s announcement to ban the burqa and niqab, which is still to be discussed in the Cabinet, the resolve to close down around 1,000 Quranic schools, to disallow the import of books on Islam believed to have been authored by radical writers, and to open rehabilitation centres to re-educate suspected Muslim extremists – all in the name of fighting Islamic extremism, is the unfortunate outcome of the progressive retreat of political liberalism and evaporation of that overlapping consensus.

An excerpt from a longer article political Buddhism, political liberalism and sharia appeared on the Daily FT.