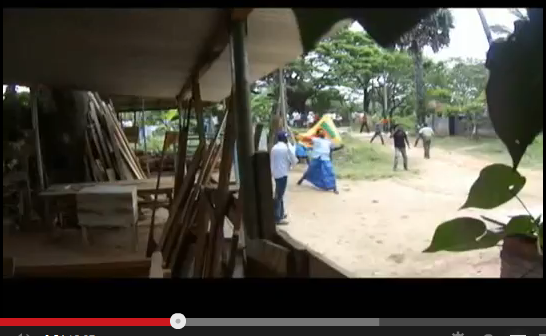 Shamindra Ferdinando
The Tamil National Alliance (TNA) yesterday accused the government of trying to disrupt its Northern Provincial Council election campaign by attacking its national and local level leaders.
TNA MP Attorney–at-law M. A. Sumanthiran said that Saturday’s attack on a meeting held in Kilinochchi, attended by four TNA MPs, including himself, could be the beginning of a government campaign to scuttle his party’s election campaign.

In a brief interview with The Island, MP Sumanthiran alleged that a gang led by a person carrying a national flag had carried out the attack under the nose of Kilinochchi police.

Although four MPs had escaped unhurt, the attackers had caused injuries to at least 13 persons before walking away from the scene, an irate Sumanthiran said, alleging that three of those involved in the attack had been caught and handed over by the TNA to the police, but they had been released. Among them was a police officer attached to the Criminal Investigation Department, National List MP Sumanthiran alleged.

Asked whether he was concerned about the Kilinochchi incident in view of the Northern Provincial Council election on the horizon, Elections Chief Mahinda Deshapriya said that he couldn’t comment on media reports. However, inquiries could be made if a complaint was lodged by the aggrieved party, he added.

MP Sumanthiran said that at the onset of the meeting there had been about 30 to 40 persons and by around 11.45 the number had risen to about 60. “Although protesters shouted anti-TNA slogans, we didn’t react, though we were concerned. The Kilinochchi police provided us with security. We were seated under some trees on MP S. Sritharan’s compound. But soon after the protesters turned violent and began throwing rocks at us. We took refuge inside the house. Then they started attacking the house,” Sumanthiran said, appreciating Ministerial Security Division (MSD) personnel for removing them to safety.

Responding to a query, the MP said that TNA activists had managed to apprehend two attackers who had entered the compound. The Kilinochchi police had thrown them out of the compound allowing them to go away, the MP alleged. Shortly thereafter TNA activists had got hold of another person allegedly involved in the attack, the MP said, adding that the Deputy Inspector General in charge of Kilinochchi was present at that time. “When we handed him over to the DIG, the suspect produced an identity card identifying himself as a CID officer. We were surprised when the DIG declared that the suspect was a police officer, who had come with him to the scene,” MP Sumanthiran said.

Police spokesman SP Buddhika Siriwardhana yesterday afternoon said that the police were yet to make arrests in connection with the Kilinochchi incident.

Sumanthiran said that the MSD should conduct a separate inquiry into the incident as four MPs had been among those targeted by government sponsored thugs. The MSD could easily establish the truth by recording the statements of eight MSD personnel who were at the scene of the incident, he said.

Commenting on the recently concluded United Nations Human Rights Council (UNHRC) sessions, Sumanthiran said that US sponsored resolution, titled Promoting Reconciliation and Accountability in Sri Lanka, especially referred to the forthcoming Northern Provincial Council polls. The MP said that in fact they were really surprised the government was going all out against the TNA in the Northern Region knowing well the international community was closely watching what was going on here.
IS