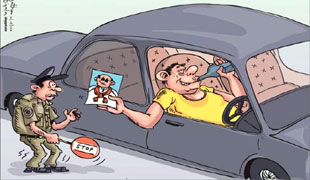 The Global Corruption Barometer (GCB) released by Transparency International on 9 July, contains findings suggesting that corruption is still perceived as a problem in Sri Lanka, with some 64% of Sri Lankan respondents claiming corruption was on the increase in the country in the past two years, while only 18% thought it has decreased.

According to the GCB report, more than 72% of the people surveyed in Sri Lanka believe ordinary people can make a difference in the fight against corruption. Over 78% showed their willingness to ask the government to do more to combat corruption.

When asked for their views on the effectiveness of the current government in the fight against corruption, 47% of them have said the government is inefficient in combating corruption.

The Global Corruption Barometer 2013 is a survey of 114,000 people in 107 countries, and it shows corruption is widespread. Between September 2012 and February 2013, more than 6,000 people were interviewed from six different countries in South Asia on their views of corruption levels in their countries and their governments’ efforts to fight corruption.

More than one person in two thinks corruption has worsened in the last two years, according to the GCB, but survey participants also firmly believe they can make a difference and have the will to take action against graft.

“Governments need to take this cry against corruption from their citizenry seriously, and respond with concrete action to elevate transparency and accountability,” Labelle said, adding, “Strong leadership is needed from the G20 governments in particular. In the 17 countries surveyed in the G20, 59% of respondents said their governments are not doing a good job at fighting corruption.”

Politicians themselves have much to do to regain trust. The Global Corruption Barometer 2013 shows a crisis of trust in politics and real concern about the capacity of those institutions responsible for bringing criminals to justice. In 51 countries around the world, political parties are seen as the most corrupt institution. Fifty five per cent of respondents think their government is run by special interests.