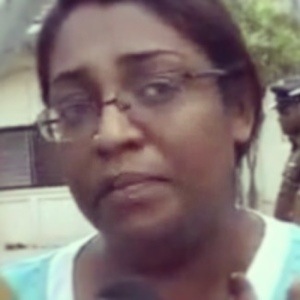 The home of a senior Sri Lankan woman Journalist in Bambalapitiya was invaded at night by a gang of five armed men who attempted to abduct her after ransacking the house and robbing valuables.Prompt action by the Police resulted in one of the intruders being killed and two injured. Two other were arrested.Three Policemen also were injured in the nocturnal incident that has shocked the beleaguered Journalist fraternity in Sri Lanka.
Mandana Ismail Abewickrema is the Associate Editor of the English weekly newspaper”The Sunday Leader”. She writes the Political Column of the paper and also conducts interviews with prominent political leaders of the Country. Mandana came into Prominence some weeks ago when she played a constructive role in forming Sri Lanka’s first trade union for Journalists.
She was elected its first President.
Mandana is married to senior Journalist Romesh Abeywickrema who is currently a Deputy Editor at “The Sunday Leader”.They live at Lester James Peiris Mawatte (Dickman’s Road) in Bambalapitiya .Their house near St.Pauls’ has a compound surrounded by a low parapet wall.

The Home invasion had occurred in the early hours of Saturday August 24th 2013.At the time of the incident Mandana ,her daughter and her parents were in the house. Husband Romesh was not in.The family was asleep and unaware that their home had been invaded.

Mandana Ismail Abeywickrema gave her version of the events to many media personnel when asked.According to Mandana she was awakened by a noise around 2.30 -3.00 am and had felt someone was moving around in her room. She saw some shadows and shouted out “Kawda” (Who is that) in Sinhala. Two men had suddenly jumped on to her bed and grabbed her. One held a big knife to her throat and threatened her not to shout.
TELEPHONE
The lights were then switched on.Four of the gang were in her room. Two brandished knives. One had a grenade.The gang had concealed their faces by tying some clothes in the house around their heads.They disconnected the telephone and removed the battery from Mandana’s mobile phone. The gang had then said that they wanted the valuables in her house. Mandana had then replied saying “Take whatever you want but don’t harm my family”.
The gang had then broken open the cupboards, wardrobe and chest of drawers and ransacked them taking out some things. They also took the money in Mandana’s purse.The gang had also queried when will your husband come?in Sinhala. Under the pretext of searching for valuables the gang had perused several files,documents and books also.It appeared that the gang displayed a keen interest in the documents and files which was quite unusual for common burglars looking for valuables.
The gang had then tried to move outside her room.One attempted to gag her with a towel. Mandana then asked them not to cover her face as she had breathing difficulties.Then one gang member took hold of her wrist firmly and waved the knife saying she will be hacked if she shouted out.

The gang had said we know there is a lot of gold jewellery here. We want to search. Mandana had replied you can take whatever you find here but don’t do anything to my parents or daughter.
When they went out Mandana saw the fifth gangster standing outside her parents room. When her father MM Ismail heard the noise and came out one of the gang tried to grab hold of him. Mandana remonstrated saying don’t do anything to him. When they let go of him Mandana asked her father to go in and lie down quietly and not do anything.
Mandana’s mother too got up to go to the toilet and was pushed to the wall. Again Mandana shouted out not to do anything but take whatever they wanted.She asked her mother to go in and stay with the father.
VALUABLES
After searching around and taking a few more valuables the gang went up to the room where her ten year old daughter Sharanya was sleeping. When they asked what was in the room,Mandana replied it was her daughters room and not to go in. Two however went in and woke up the girl and began pestering her with questions. The frightened daughter started crying.
Mandana then asked the others not to harass her daughter and to leave her alone. One of the gang then asked the others to leave the child alone and told Mandana that he too had a little sister like her daughter.
After a while two of the gang started shouting at the others. “we have delayed too long here.Let us complete the work we have come to do”. After some discussion one of them told Mandana “Akke”(elder sister)we have nothing against you. Some one who is against you has given us a “contract” to carry out.So you have to come with us”.

By this time husband Romesh Abeywickrema had arrived home. Seeing the lights he got worried and called Mandana on her mobile and then the land line. Getting no reply Romesh got suspicious and telephoned 119 Police Emergency. A little later he went up to the door and rang the bell. Hearing noises he was able to deduce that some intruders were inside. Romesh was in a quandary as to what he should do when he was informed by Police that a Patrol car was on its way. He then prudently decided to wait until the cops arrived.
Hearing the bell ring the gang got excited. They argued among themselves in Sinhala.Some wanted to finish the job and go.Others said let us take her and go. Mandana was now in a panic but absolutely helpless.
GANGSTERS
Miraculously at that point one of the gangsters who had left the scene came back running saying “polisiya Avilla”(Police has arrived).Now the gang got frantic. They scattered.The sound of a window being broken was heard by Mandana.
Suddenly a Policeman burst in. Two of the gang jumped on him. Mandana made her escape when the scuffle was going on. She got into the room with her parents and daughter and locked it from within.She heard a big commotion of shouts and running feet.
Then she heard guns being fired. All of them then lay down on the floor. After a while the firing ceased,The Police then came and said they were safe.A lot of furniture was damaged in the melee and bloodstains were visible.
Fortunately a Police patrol car was in the vicinity and had been promptly alerted by Police emergency. The Policemen had arrived at the spot and furtively moved forward after parking the vehicle at a distance. Romesh met them and informed them of the situation.
The cops then moved in quietly and one entered the house through a window.Apparently the Police had opened fire when the gang had attacked them with knives and tried to escape. One of the gang was killed on the spot. Two were injured, one of them critically. Two others hiding in the house were discovered after a search and arrested. Three Policemen sustained injuries.One of them was hospitalised.None of the family members were injured.The entire ordeal had taken almost two hours.
GRENADE
The bomb disposal squad of the Police Special Task Force was summoned to defuse the grenade that was found near the wall.A three wheeler was detected parked by the wayside and is presumed to be the vehicle in which the gang had travelled in. A magisterial inquiry into the death was conducted at the house.Police have also recovered the valuables and cash taken by the intruders.
Police Media Spokesperson S.P. Buddhika Siriwardena told the media that the team of police officers have arrived at the said house based on a tip-off. He further said that a police officer sustained cut injuries in an attack launched at them by the intruders.Subsequently, the police have opened fire. The intruders who sustained injuries during the shooting have been admitted to the Colombo National Hospital under police security.

The intruder who was killed has been identified as 39-year-old Kadirappulige Indika Sampath Kumarasiri from Awissawella, according to Police spokesman SP Buddika Siriwardena. He said the other suspects were Kadirappulige Rohiha Chandimal Kumara, Kadirappulige Rohitha Lakskman, Udayasiri Asanka and Vithana Arachchige Shantha Kumara.They are supposedly from Hungama, Kiribathgoda, Ambalantota and Awissawella.The person killed and two others arrested are brothers.At least two of the five are suspected of being army deserters.It is said that four of the five have a record of convictions for housebreaking and burglary.
Police are conducting further inquiries after fingerprinting strategic spots in the house and compound. It appears that there is more to this incident than what meets the eye. Although it is too early to comment decisively there is suspicion that the intruders were not simply carrying out an abduction “contract” by an unknown enemy against Mandana Ismail Abeywickrema or that the motive was robbery alone.Given Mandana’s visible role as a Journalist Trade unionist there is strong suspicion that the motive could have been different and that members of the underworld were used as “agents” by sinister forces.
Two previous incidents are also troubling in the current context. One was the slashing of tyres of the family vehicle by unknown persons.The other was the mysterious presence of a dead cat in the premises.Both incidents had happened during the course of the past week.Mandana had also received several threatening telephone calls from anonymous persons.
Only an impartial probe by the Police could elicit the truth. The Police however are to be commended for promptly arriving at the scene and taking effective action.Meanwhile members of the fourth estate are flocking to the Abewickrema residence in large numbers to express solidarity with their fellow scribes and family.
DBS Jeyaraj can be reached at ~ [email protected]