Please help to identify these criminals 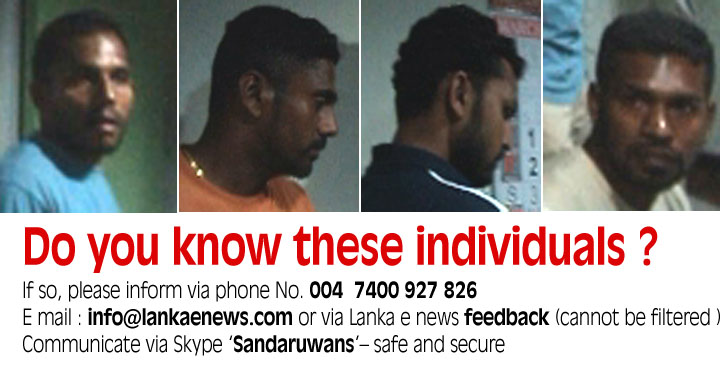 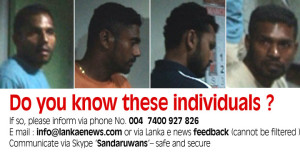 In the above photographs are the faces of the criminals involved in the infamous white Van abductions who were captured by the public and handed over to the Wellampitiya police on the 10th, but released unlawfully by the MaRa regime. These criminals are of attached to the Army. They are :

(The names are not in accord with the row of photographs). Although identity cards were submitted , when inquiries were made by us , there were doubts regarding the veracity of these identity cards.

If this murderous MaRa regime can officially make a phony passport for an LTTE leader Karuna Amman and send him to the UK, to this regime steeped in unlawful activities, making bogus identity cards to its own murderers is no big task. Hence , as a people’s media we are providing the opportunity to the public who are in constant threat of murder and abduction via the white Van to identify these criminals accurately.

It is unimaginable that a regime which is supposedly democratic can conduct itself in this demonic manner pampering and promoting murderers trying to kill its own Mayor who was elected duly by the people. It is most noteworthy that this Mayor’s brother was also abducted by these white Van criminals some time ago and killed based on information passed to the mayor by no less a person than Basil Rajapakse , the brother of the killer duo President Mahinda (Idi Mahin) and Defense Secretary Gotabaya Rajapakse ( Gota). It is most likely that ‘tomorrow’ an SLFP M P , Minister , former Minister , former Prime Minister or a former President can be similarly targeted .

If there is anyone who cannot understand the seriousness and gravity of this present blood thirsty murderous climate in SL , he is either insane or mentally feeble.

Now that these murderers who were committing crimes at the biddings of the Idi Mahin regime enjoying regime’s patronage have been exposed ,it is most probable that these criminals can be liquidated by the brutal regime in order to wipe out all trace of evidence including those behind relating to the crimes committed that may come to light through them if they are living. It is therefore important that they are protected. Citizens of this country who think that as a society respecting discipline and laws is paramount must ensure, based on the information elicited from these criminals that every accomplice associated with the crimes are brought before the law duly irrespective of their positions however high or low. This will be in the best interests of all and for the benefit of the future generations. We seek the public assistance towards this.

Whatever information you may have of these criminals may be conveyed via the following phone Nos. and e mail:

E mail : [email protected] . If you think that is being filtered , fill up our feedback space and send. Since that is linked as one with our server , the regime cannot filter it.

Please take copies of this information and distribute as many as possible in the interests of the nation and future generation. If you love Democracy and freedom this is your opportunity.