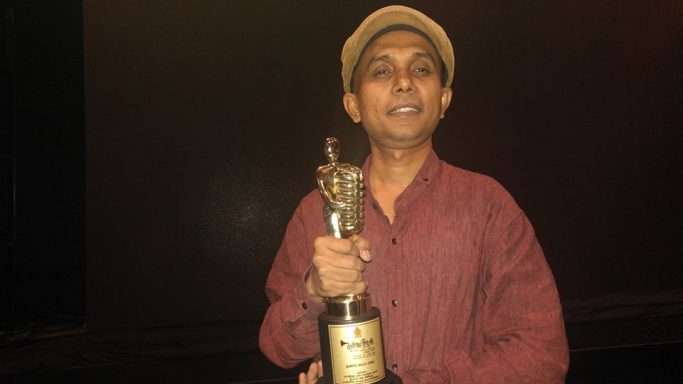 Playwright Malaka Devapriya, who was summoned to the Organised Crimes Prevention Division (OCPD) of the Police this morning over a radio drama he had written directed, was released on the same day.

His lawyer Wilson Jayasekara told RepublicNext that Devapriya was let go as the OCPD was satisfied with his statement.

The award-winning dramatist, radio playwright, film producer and director was summoned to the department this morning following a complaint made against one of his radio dramas broadcast by the national radio station last year.

The complaint was lodged by Agulugalle Siri Jinananda Thero, who heads the Buddhist Information Centre, alleging that the titles of the dramas were a blasphemous “distortion” of Buddhist terminology. Incidentally, this is the same monk who had, earlier this year, sought legal action against author Shakthika Sathkumara over a short story. Sathkumara was subsequently arrested under provisions in the controversial International Covenant on Civil and Political Rights Act (ICCPR Act).

The complaint against Devapriya today was a sequel to last year’s criminal proceedings against his radio drama titled ‘Kanata Paarak’ (Earful of Visuals).

His attorney Jayasekara told RepublicNext that the police had recorded a lengthy statement about the nature of his client’s work. Information was also sought on the lead actor of the play, he said.

A strongly worded statement made by Devapriya on the matter had prevented the police from asking his client too many questions, noted Jayasekara.

As they were satisfied with the statement recorded today, the OCPD has told Devapriya that they will send a report based on the statement to the Attorney General’s Department.

Police had filed moved the Colombo Magistrate’s Court against the plays under Sections 291A and Section 291B of the Penal Code and under Section 3(1) of the ICCPR Act of 2007.

Devapriya in turn had filed a human rights petition in the Supreme Court claiming infringement of his fundamental rights which is to be taken up at the end of this month (30 Oct).

Dewapriya has named the Inspector of Police of the OCPD and the Inspector General of Police (IGP) and the Attorney General as respondents. According to Jayasekara, today’s summon was noticed while the said FR matter is just days away.

Jayasekera also claimed that Dewapriya was not given a chance to talk about his FR case when he tried to include it in his statement.

“But we will proceed with the FR case,” he added.