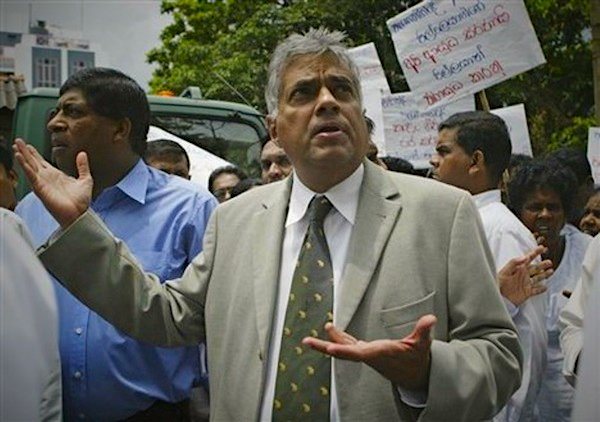 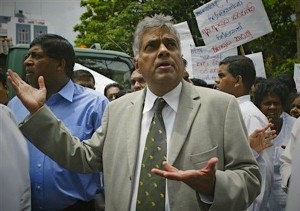 Image from AsiaNews.It
I enjoyed reading several articles written by Dayan Jayatilleka and Laksiri Fernando, on the future form of a democratic struggle launched by the people of Sri Lanka, to rise above the current political catastrophe. This is a complementary note as a Sri Lankan voter that maybe of some use to a future leader from the opposition who would give leadership to such a struggle.

President Rajapaksa himself made the remark “the intellectuals in a country hear the first footsteps of a dictator”. He tried to give the impression that the loud sounds of a dictator’s footsteps we hear are not coming from his boots. In fact, with the 18th amendment, Divi Neguma Act, and the sacred areas act, Rajapaksa’s have already claimed victory in their path towards a dictatorship above a republican democracy. Any democratic struggle to save the country from a corrupt dictatorship in the league of Suharto’s in Indonesia, should therefore account for the pillars of deception the present status is built up upon.

1) The inferiority complex – South Asians in general tend to get mesmerized by concrete, rockets, and satellites, as symbols of prosperity, or yardsticks for comparison with the West, despite their abject poverty. The Rajapaksa’s have mastered the art of exploiting this complex. A future leader from the opposition should make an attempt to convince the people that Sri Lankan civilization should be based more on moral values in good Governance, respect for human rights, notion of citizenship, and justice, that was upheld at times of sustainable prosperity in Sri Lanka. A future leader should not only address the appalling situation at present, but also what existed during J.R. Jayawardena and R. Premadasa eras. Therefore, if this future saviour comes from the opposition UNP, he/she has to confess the flaws in the past genuinely and openly.

2) The paranoia of Island dwellers – If Island dwellers are not well informed, they can easily fall into a state of paranoia, that bars them from joining hands with other communities and countries towards a path of common prosperity. Rajapaksa’s have tactfully maintained a phantom threat from Muslims and Tamils to Sinhalese, and created the domestic atmosphere to invite criticism from the West, so that they can use it to nurture the local paranoia to appear as saviors. A future leader from the opposition should clearly redefine the criteria for international friendship. In my view a country is a friend of Sri Lanka if it buys value added products from Sri Lanka, provides technological assistance, supports the local educational infrastructure, imposes conditions on purchasing fire arms from their own ammunition suppliers, and raises unreserved criticisms on the flaws of Sri Lanka’s human rights and justice records that affect the lives of law abiding citizens. Those countries that are more interested in importing raw materials and exporting their finished products including ammunition without any concern about the human rights of the people of Sri Lanka, are not in a true friendship, but in a relationship of exploitation with Sri Lanka. According to Rajapaksa’s, friendship is about staying silent on bad human rights and justice records in Sri Lanka, and of course on bad Governance. They take the Western policy on Israel as an example. In fact they don’t expose to Sri Lankan voters that the most educated and genuine Jews who love Israel has begun to realize that the West is in a relationship of exploitation with Israel than one of true friendship, and that this exploitation would endanger the long term peace in Israel. See for example the public uproar against the Prawer Plan. Concerned Jews have begin to realize that human rights, notion of citizenship, and rule of law do matter, and that people like President Obama are better friends of Israel than far right wing republicans. Therefore, a future leader from the opposition should dissect the Rajapaksa strategy to nurture domestic paranoia to highlight the importance of local and international collaboration in technology research, international trade, democracy, and justice.

3) Blatant abuse of state media, conquering of private media, blockade of free media, and abuse of Government mechanisms like Samurdhi for political purposes: We noticed how this propaganda machinery works during the impeachment motion against the Chief Justice, Dr. Shirani Bandaranayake, and during the events leading to the incarceration of General Sarath Fonseka. It is hard to counter lies spread across the country through a mammoth propaganda machine sponsored using Tax payers’ money. Carefully notice how the innocent Samurdhi Niladhari’s are being abused as Government political messengers at village level. A future political leader from the opposition should hold pocket meetings at village level, and discuss topics relevant to their localities to encourage critical thinking. They should also keep a close dialog with the Samurdhi officers at the village level rather than hating them. They are being abused and held in ransom to an extent that a minister well known for underworld affairs tied one of them on a tree, and later managed to force the poor officer to claim that nothing of that nature happened. The future leader should also keep a close dialog with the employees of the state media machines like Rupavahini and ITN, because except for a corrupt few at the top, majority employees truly love the country and are concerned about the status quo. It is only that their hands are tied. Nothing can be a substitute for village level pocket meetings. Invest in some infrastructure like computers, Internet access, and projectors, so that you can hold frequent Skype meetings with village level groups without having to expose yourself to danger too much. Remember, Rajapaksa’s go to the village with more than 600 elite commandos around them, and you do not.

4) The Leader of the Opposition: Many do not realize that the position of the leader of the opposition can be a very good holiday package in wrong hands. Do people know that the Leader of the Opposition enjoys a luxury maintenance budget, VIP treatment in airports, paid foreign travel, a fabulous recreation quota, and other perks, on taxpayers’ money? President Rajapaksa has been so generous with the treatment offered to the current Leader of the Opposition that this position has virtually become the ministerial post of “opposition affairs and intelligence services” with the duties of detecting early any emerging threat from an alternative leadership to the President and himself. Any future leader from the opposition has to counter this situation. My recommendation as a voter is to start afresh. Be critical of the past mistakes done by your own party that would take the playground away from the duo. The more you try to defend your past, the more trumps you give the Rajapaksa’s to nurture the above paranoia, be it UNP, JVP or TNA. The other advantage of such openness is that voters like us will notice you as one with courage and judgment to take the country in a new path.

5) Local relevance and international recognition: The Rajapaksa’s always play the local relevance card that the past UNP or JVP did not have, well of course with the exception of D. S. Senanayake era. In fact, the Rajapaksa’s are not as locally relevant as they may claim to be, but are well aware of the weaknesses of the thought process of rural people of Sri Lanka. It is only that they have mastered the art of exploiting them. The truth is that Rajapaksa family has better ties and investments in the US than most branded pro-West UNP’ers. The Rajapaksa’s have hired local ultra-Nationalistic parties like the Jathika Hela Urumaya (JHU), and mouth pieces like Wimal Weerawansa, fake leftists like Vasudeva Nanayakkara, to give cover to the Rajapaksa’s to play this duel role – “villager”, “anti-West savior” for locals, and the progressive “investor”, “collaborator”, and “citizen” in the US. A future leader from the opposition should patiently dissect this fabric of rogues to open up the eyes of the voters.

To do all these, you have about three years. I thought of writing this because I think three years is enough to patiently plan and act. But please keep in mind that voters like us will not choose you as a leader if you do not show good signs of leadership now. For instance, the current opposition leader will never win my vote. If such lethargy becomes the norm of the leadership of the country, Sri Lanka will never be able to exploit the grand opportunities of the 21st century, by changing the course of Sri Lanka’s human rights record, notion of citizenship, respect for the independence of the judiciary and rule of law.