Photo Feature: An Initiative in Rajasthan Is Transforming the Lives of Former Manual Scavengers

Nai Disha is an initiative that rehabilitates manual scavengers, especially women, and provides them with vocational training to find alternative livelihoods.

She didn’t know what it was to stay clean. She never worshipped or touched any god. Health and hygiene were never a part of her life and for that matter, neither respect and dignity. But all this is now past for Usha Chaumar, a former manual scavenger, rescued and rehabilitated in Alwar, Rajasthan.

A little over 40 years old now, Usha is trained to make jute bags, pickles and also to work in beauty parlours. Today she makes almost Rs 3,700 a month as stipend and more than Rs 5,000 on her own. People who once avoided her for being an ‘untouchable’ now call her home for weddings and events. But the scars from her past life remain. Usha recalls how she started her life as a manual scavenger when she was just seven. For survival, she had no option but to follow in her mother’s footsteps. At the age of 14, she got married. With despair, she recalls, “In our society, eligibility of a groom was gauged by the number of toilets he had under him to clean.” 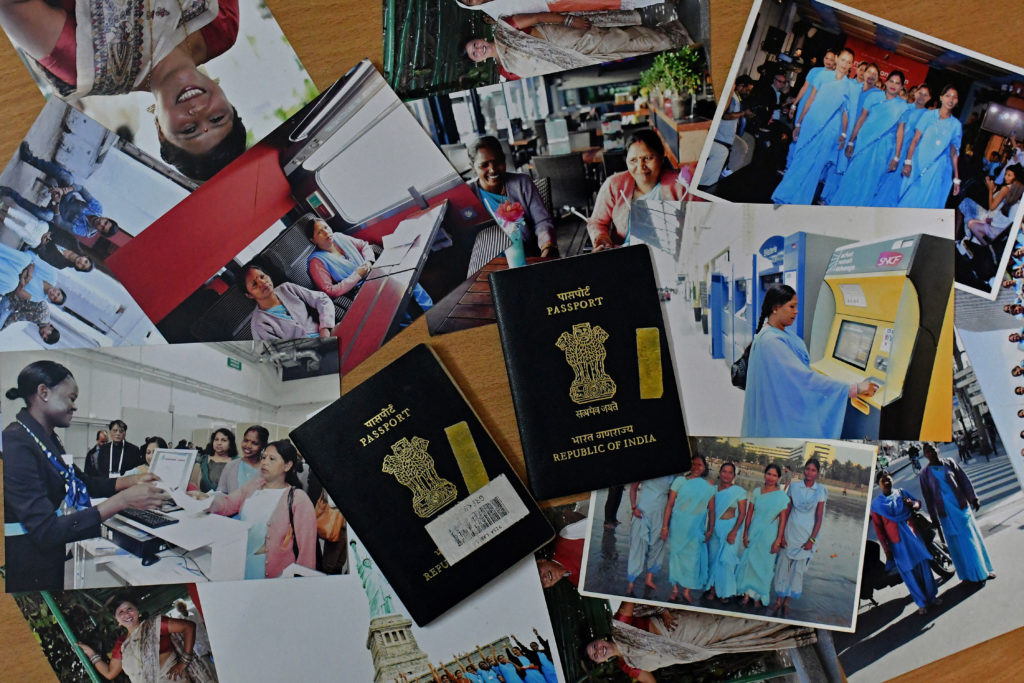 What followed in Usha’s life for the next three decades was cleaning dry toilets full of human excreta, using her bare hands. She toiled in about five to ten houses and what she got in return was Rs 10 per member per month, along with stale chapatti or leftover food. When she was approached by an NGO for rescue and rehabilitation, she thought it was a joke.  She couldn’t imagine that there was life for her beyond dirty toilets. But then life did turn around for her. The British Association of South Asian Studies at the University of Portsmouth invited her to share her story from being an outcast to a motivator, questioning society’s norms and showing many like her that there is a more honourable way to live.

Alwar and Tonk are two towns of Rajasthan that are manual scavenger free. It was a simple innovation that made this happen. In Alwar, 130 dry latrines were converted into two-pit compost toilets, ending the role of manual scavengers. In addition, to make former manual scavengers, mainly women, self reliant, a skill development and vocational training centre called Nai Disha was set up. The centre was established with the active cooperation and support of socially enlightened women, belonging to scavenging communities nearby. And the outcome of this initiative has been encouraging. 28 women have been trained in food processing, beauty care, embroidery, cutting and tailoring, and are leading successful lives. Usha Chaumar is one of them. 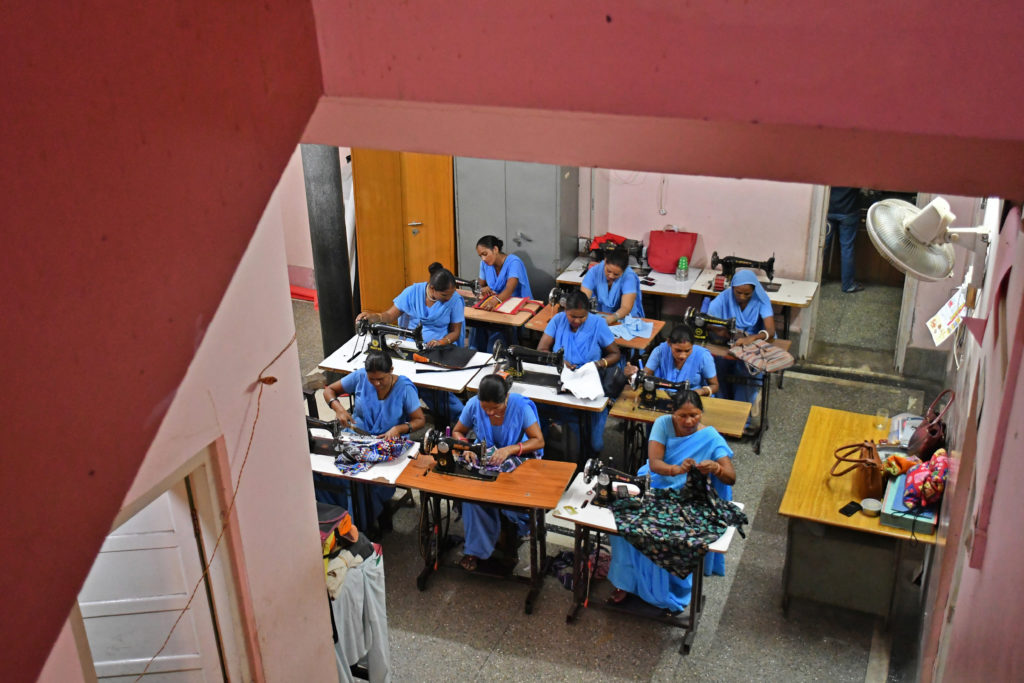 Rehabilitated manual scavengers work on sewing machines as they were trained to do small scale jobs inside a rehabilitation center called Nai Disha run by an NGO , in Alwar, Rajasthan, India on 24 September 2016. Credit: Anindito Mukherjee

Other inspiring stories from Nai Disha are Maya Sangeliya, 45, and Lakshmi Nanda 38.

Maya was rescued in 2003. Having lived the life of an outcast for so many years, now she is at peace with herself. She says she never knew how good it felt to stay clean. As a manual scavenger, she never knew that taking a bath daily could be a part of her daily life. But today she has her own pucca house with toilets. She has her own colour television. She is an active member of Nai Disha, runs her own piggery farm and has bought a few goats. 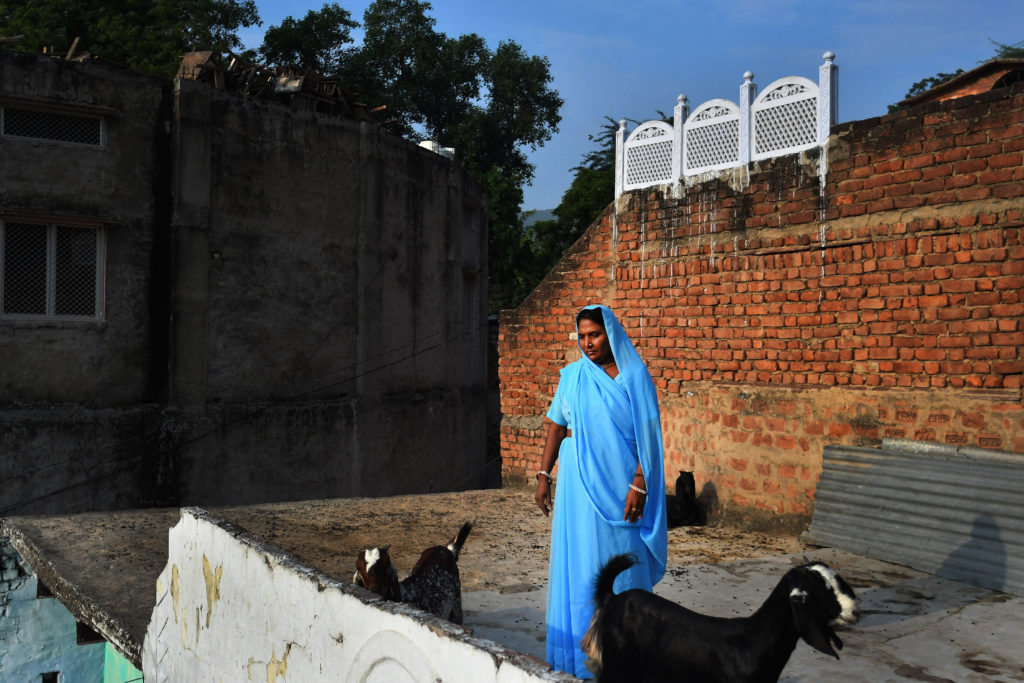 Rehabilitated manual scavenger, Maya Sangeliya, 45, walks her goats on a terrace of her house, in Alwar, Rajasthan, India on 24 September 2016. Credit: Anindito Banerjee

Lakshmi Nanda was taught how to be a manual scavenger by her mother. All of eight years of age, Lakshmi got into this inherited profession without any protest or questions, because, for her, this was life. This is what her family had been doing for generations and she too was used to it. She earned Rs 5 per person and used to clean dry toilets for 50 to 60 houses. Using her bare hands she used to collect the human excreta in buckets and then carry it on her head for disposal. Leftover food was thrown at her and drinking water was poured from a distance. 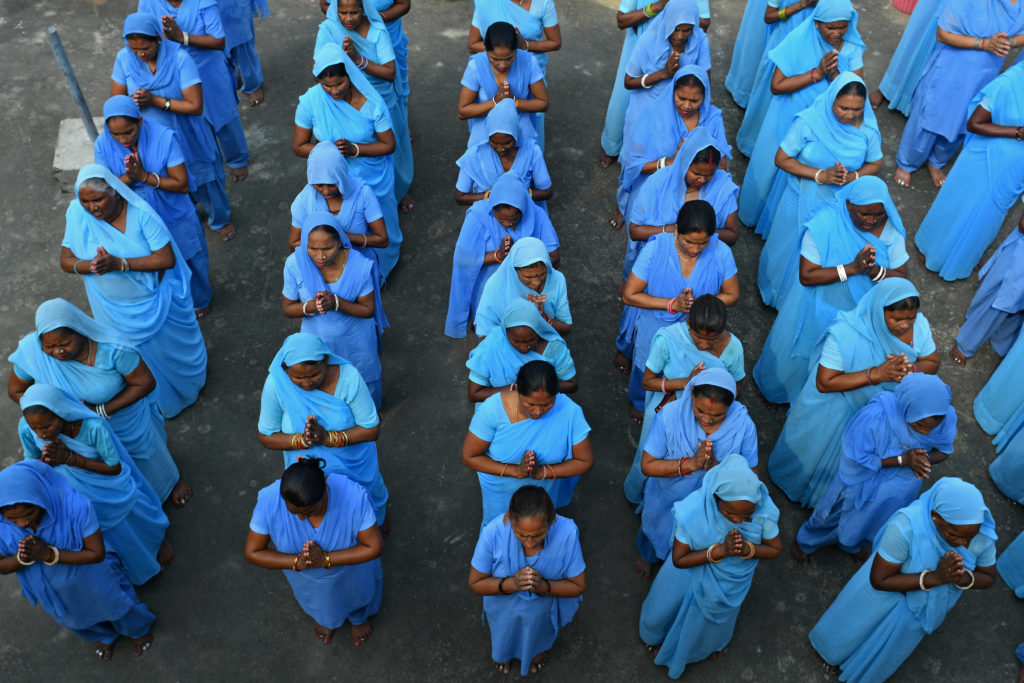 Life did not change after marriage. She had to take over her mother-in-law’s houses as she was also a manual scavenger. Her children never went to school, nor was the family in a position to think about their future, both mentally and financially. But after being rescued, Lakshmi’s life has transformed. And not just her, but her entire family too has found a new way to live. 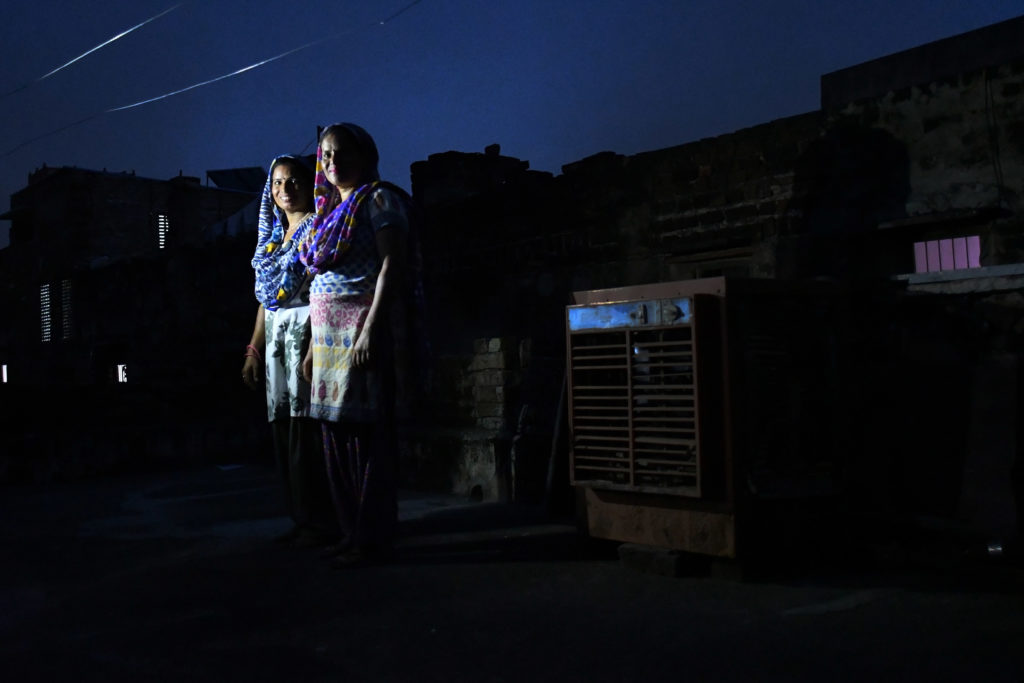 Rehabilitated manual scavenger, Laxmi Nanda, 38, poses with her sister, who was also a manual scavenger on the terrace of their house, in Alwar, Rajasthan, India on 23 September 2016. Credit: Anindito Banerjee

Today her three children, two daughters aged 17 and 12, and a son aged 14, all go to school.  She earns a stipend of Rs 3,700 per month and, in addition, the family makes Rs 5,000 from tailoring or stitching. Lakshmi holds a valid passport today and recalls fondly her memories from her visit to the US. She or anybody in her family or her social circle never even knew such a country existed. Yet one day she was in New York at a prestigious UN event. She was there to promote awareness on sanitation issues under ‘Mission Sanitation’, that showcased the plight of women scavengers in India. The event included a fashion show in which prominent models shared ramp space with rehabilitated women scavengers from India, wearing garments embroidered by them. “It was the first time I saw a swimming pool,” she chuckles. 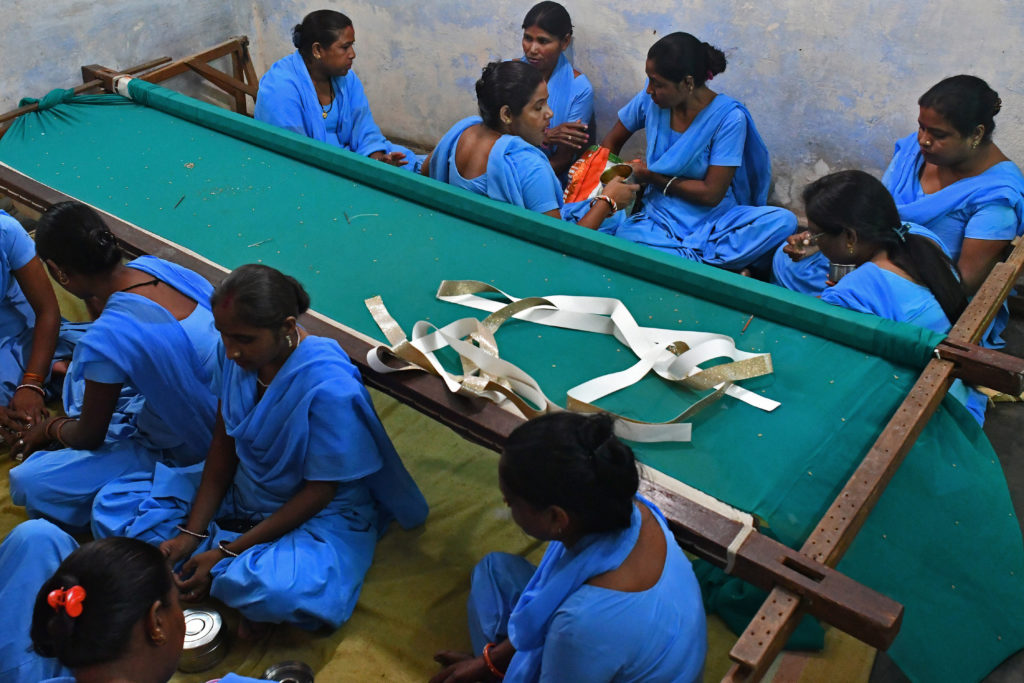 Rehabilitated manual scavengers break for lunch inside a room where they learn to work on embroidery inside a rehabilitation centre called Nai Disha run by an NGO , in Alwar, Rajasthan, India on 23 September 2016. Credit: Anindito Banerjee 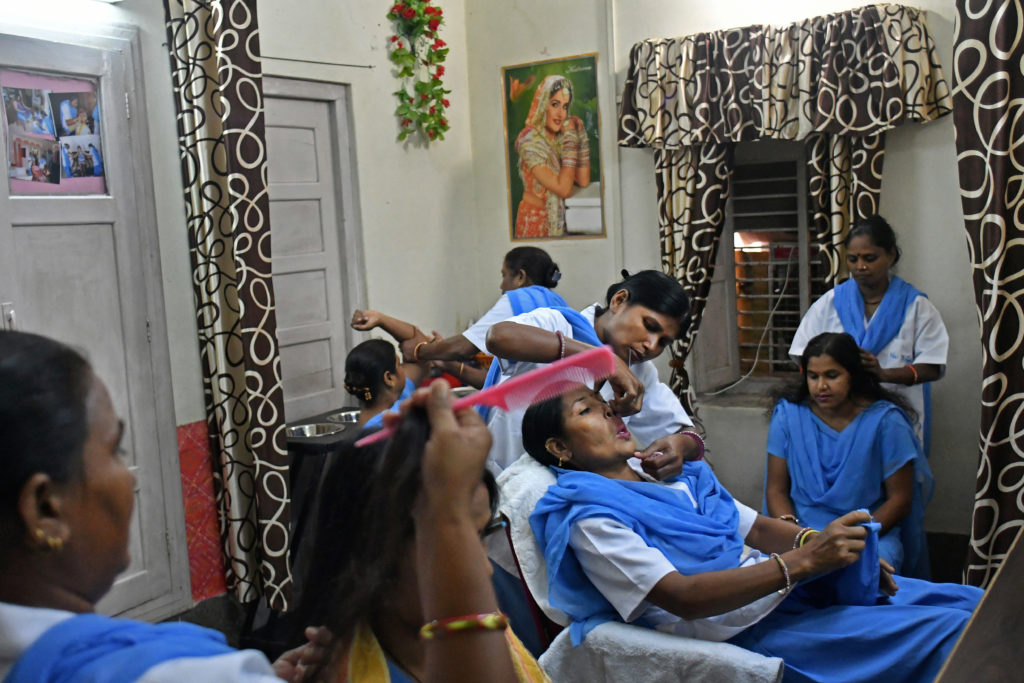 But training alone couldn’t be a source of livelihood. Therefore trainees at Nai Disha also are given a monthly stipend so that the lack of money doesn’t push the rescued scavengers to their old profession. And it’s not just training for mere survival – Nai Disha also aims to secure the future with economic empowerment. It aims to come up with a model where the two-year training is followed by a one-year period of rehabilitation, after which the trained women can be put into two categories. In the first category are those with leadership qualities and initiatives who can set up their own enterprises with the help of subsidies and loans available from the government. And the second category being those who do not have requisite leadership qualities. They can be brought under a cooperative society by providing facilities and assistance.

With the Swachh Bharat mission running successfully and making 80,000 villages and 287 blocks open-defecation free, manual scavenging also needs to be checked.  Just as the two towns of Alwar and Tonk were made free of manual scavenging, the model needs to be replicated if necessary countrywide. India has an estimated 1.3 million manual scavengers of whom 98% are women. Though the government passed the Prohibition of Employment as Manual Scavengers and their Rehabilitation Act, 2013, manual scavenging is still rampant. Policies and efforts need to be directed towards identification and rehabilitation of these oppressed workers. Along with their freedom and empowerment, integrating them with mainstream society is also a necessary.