Photo Essay: The pain and sadness in the air; Covering the Colombian landslide 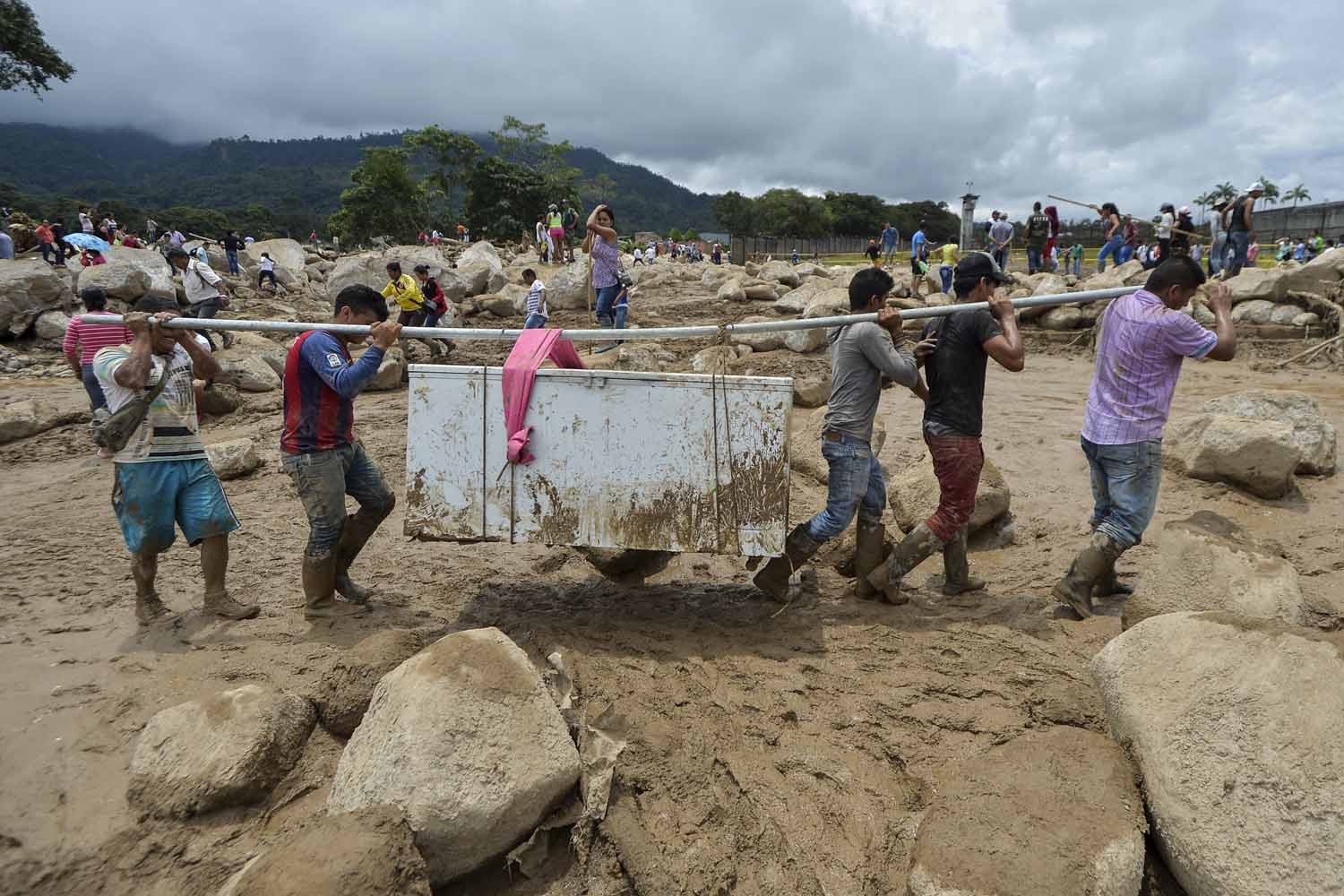 MOCOA — It’s really, really hard to watch the survivors and their pain and trauma. There are many people who have lost six, ten or more relatives. Not to mention friends, neighbors and acquaintances who also died. Out of all the things that I have covered — the armed conflict in Colombia, protests, mine collapses — this is by far the hardest.

You smell the overpowering stench of dead bodies, you hear rocks cracking, machines working. At times you hear weeping, at times you hears screams, when people see the body of a relative or of friend. And there is a heavy blanket of sadness and pain that seems to envelop the entire site. Sometimes a burst of joy, when people are reunited with their loved ones, pierces through the sadness. 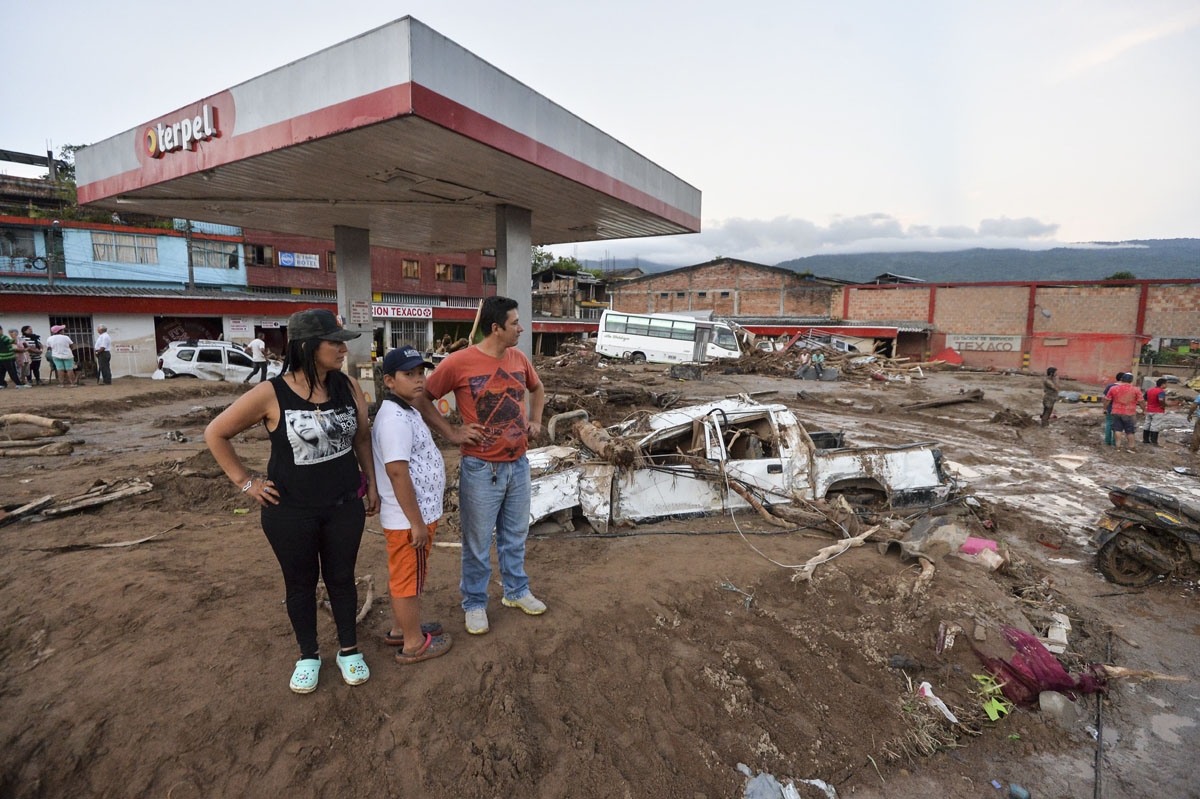 The landslide struck just before midnight. So a lot of people were swept away as they slept. The area where this happened — the Putumayo region — has been in the thick of the Colombian armed conflict for years. Many of the people living here had been displaced because of the fighting between FARC guerrillas, the paramilitaries and the army. You could say that with this natural disaster, tragedy has once again returned to their lives.

I first heard about the slide early on Saturday morning, when I woke up at my home in Cali, some 400 kilometers away. I had a few messages on my phone that something had happened in Mocoa, that a river had flooded and that there were a lot of victims. But I never imagined just how many. As the hours went by, the toll kept rising and rising. I couldn’t believe it. “Is this really happening,” I thought.

I spoke to my boss, Luis Acosta and we decided that I should try to reach the site. The road to Mocoa is terrible, but I managed to get a flight to Puerto Asis, where I stocked up on water, food and medicine, and then hitched a ride with a villager for the two-hour drive to Mocoa. Thankfully the highway was still in good shape from that side, because the other road into Mocoa was badly damaged by the slide, which wiped out three bridges. I was lucky to get a hotel room in Mocoa — no water or electricity, but at least a place to rest and keep my things. I then took a motorcycle to a spot nearby and then just started to walk around. The next day text reporter Lissy de Abreu and video journalist Guillermo Legaria joined me. 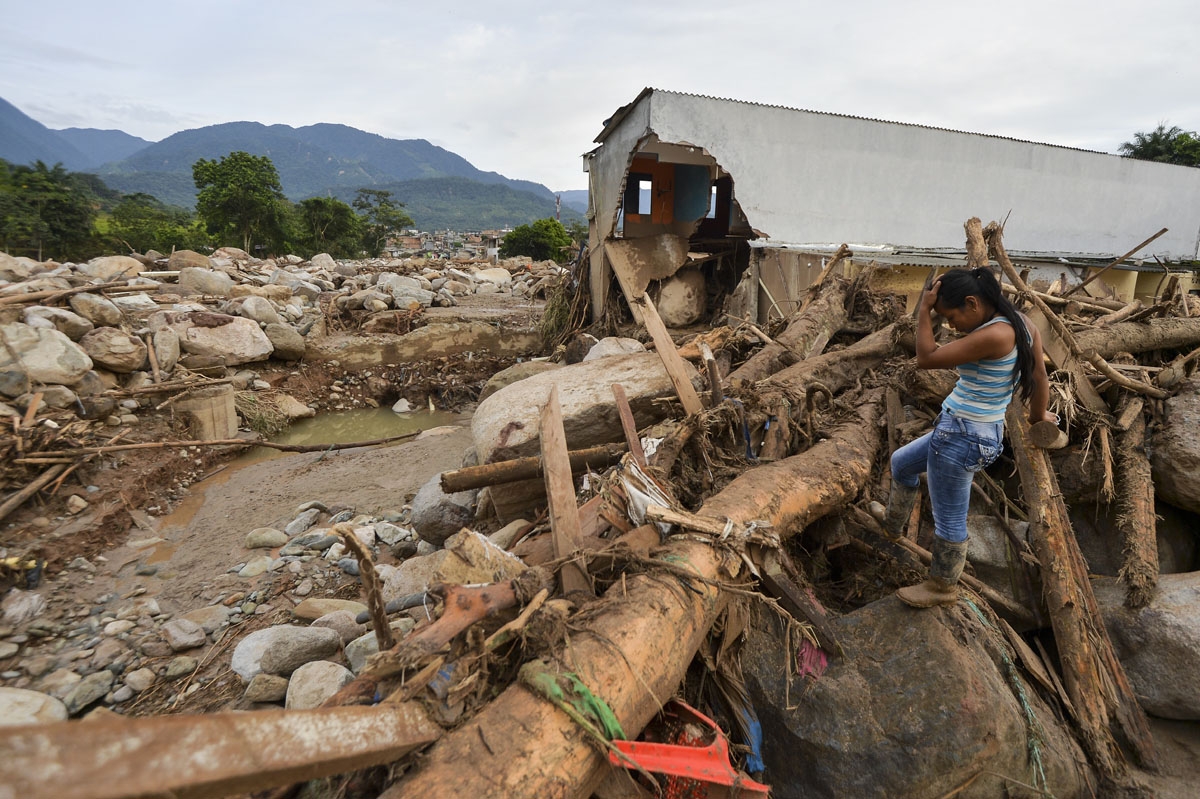 I have taken pictures of this disaster both on the ground and from the air, after I managed to get a seat on a military flyover of the area. From the air, you really realize the power of nature and the magnitude of the tragedy. You see rocks and mud below and you understand that buried beneath all those rocks, there are houses and people. What were residential areas are just rocks and mud. 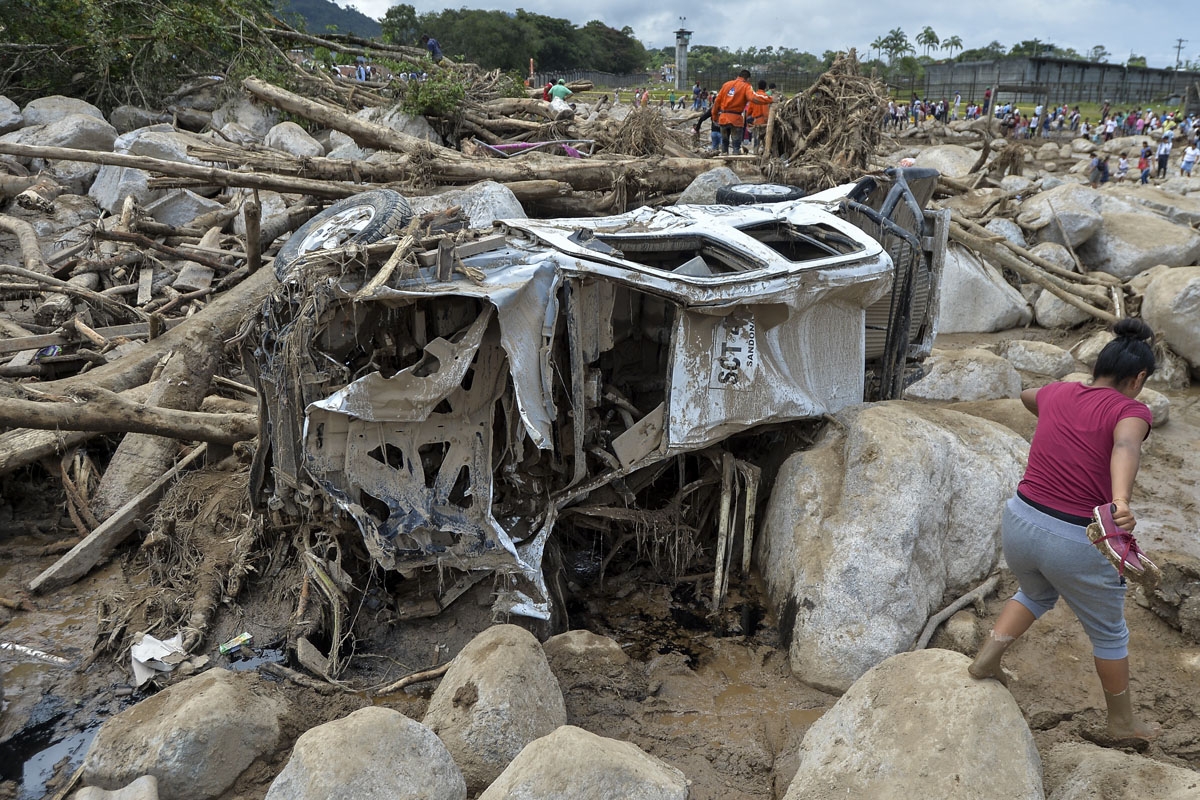 From the air, you see just how it all happened. We could see all the way to the areas where the rivers originate and see all the landslides that happened in the mountains and that got washed downstream by the rivers, just amplifying the tragedy. What started out as trickles here and there eventually turned into a steamroller of rock, dirt, mud and water that just wiped everything in its path. A lot of the hills where this happened have undergone deforestation and logging and the mountain just gave way. I could see 10 to 12 places where the mountain just collapsed and ended up in the rivers. 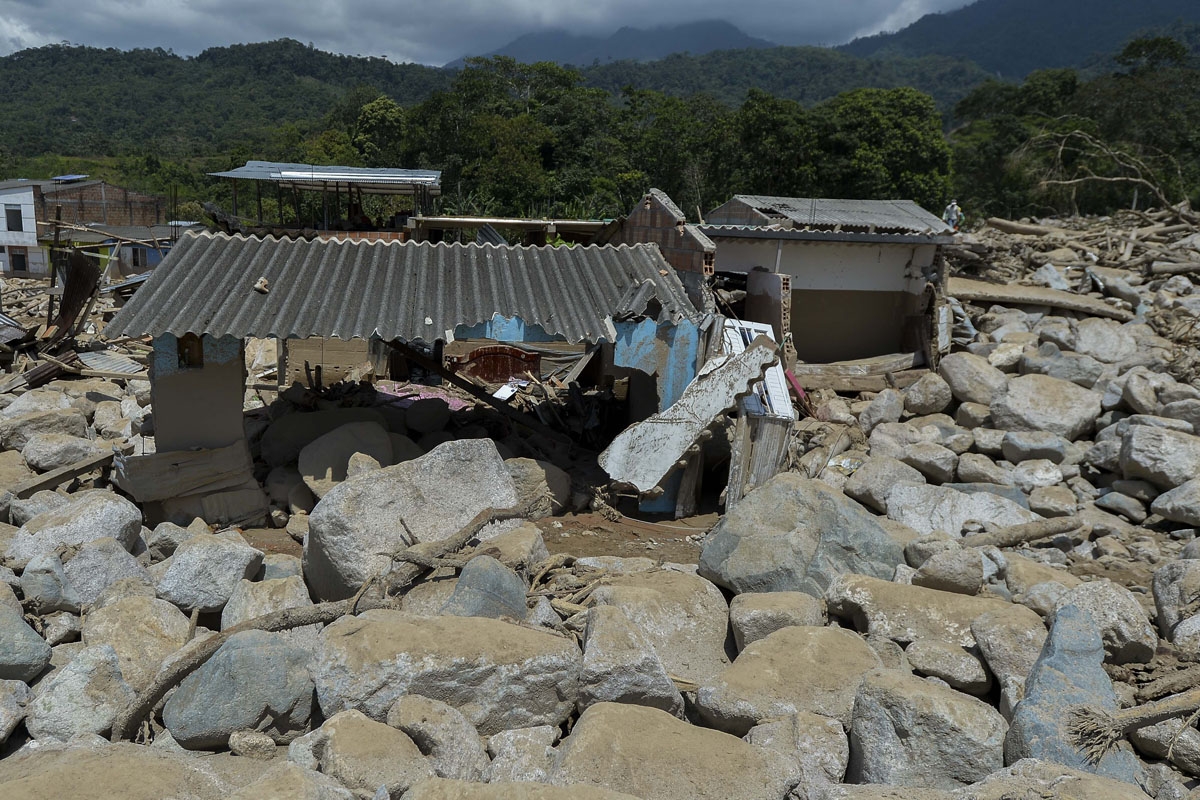 If from the air you come to appreciate the power of nature, on the ground you feel the heartbreak of the people. There is sadness and powerlessness everywhere. It’s really painful to see people salvaging the little that they have left from the rubble — a refrigerator full of water, a television, clothes, dolls, shoes. 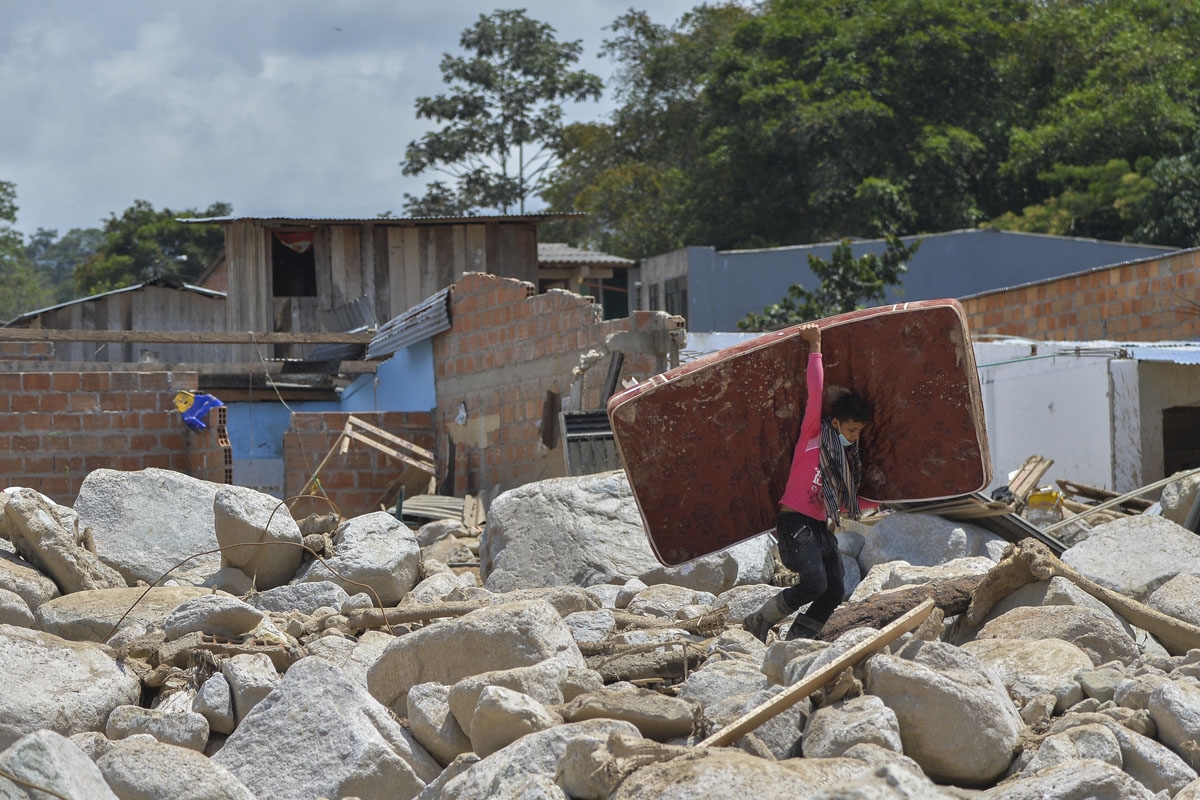 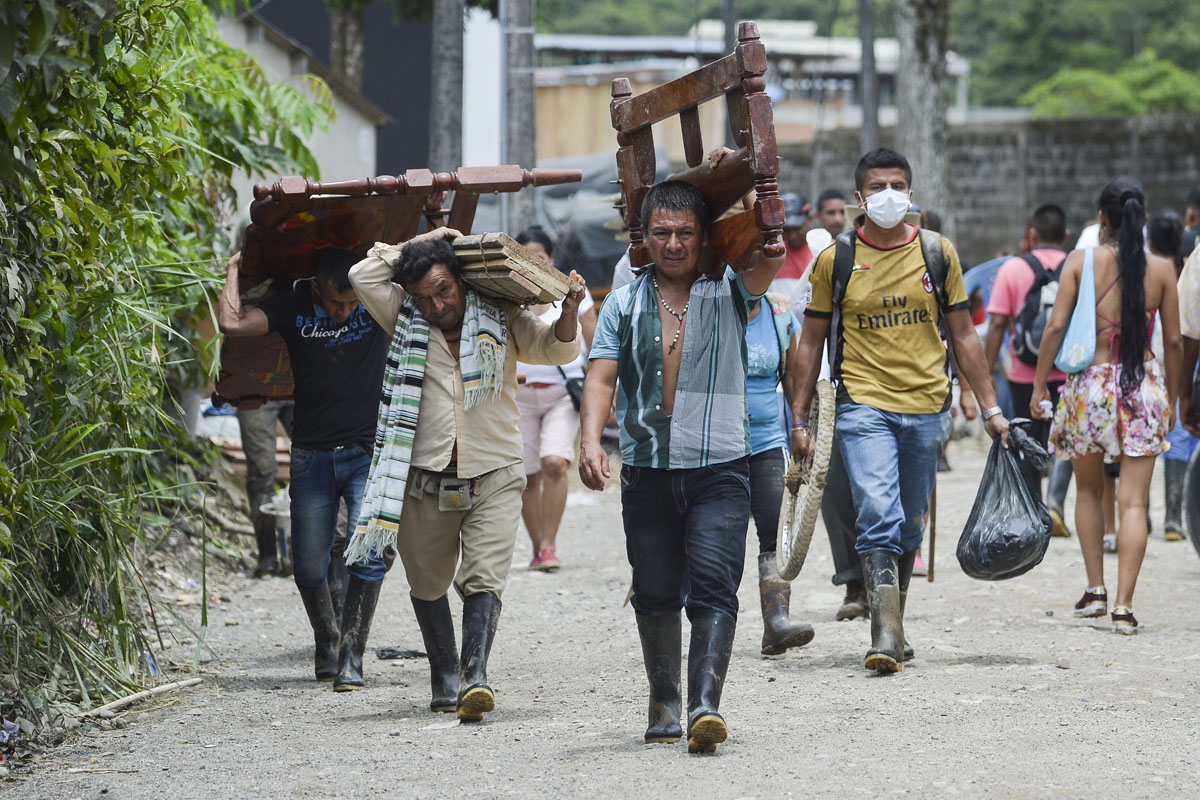 It really strikes you to the core, when you see that. And the pain, the pain that you see on people’s faces. And the sadness, the overpowering sadness that just hangs over the place, as people realize that they have lost everything. 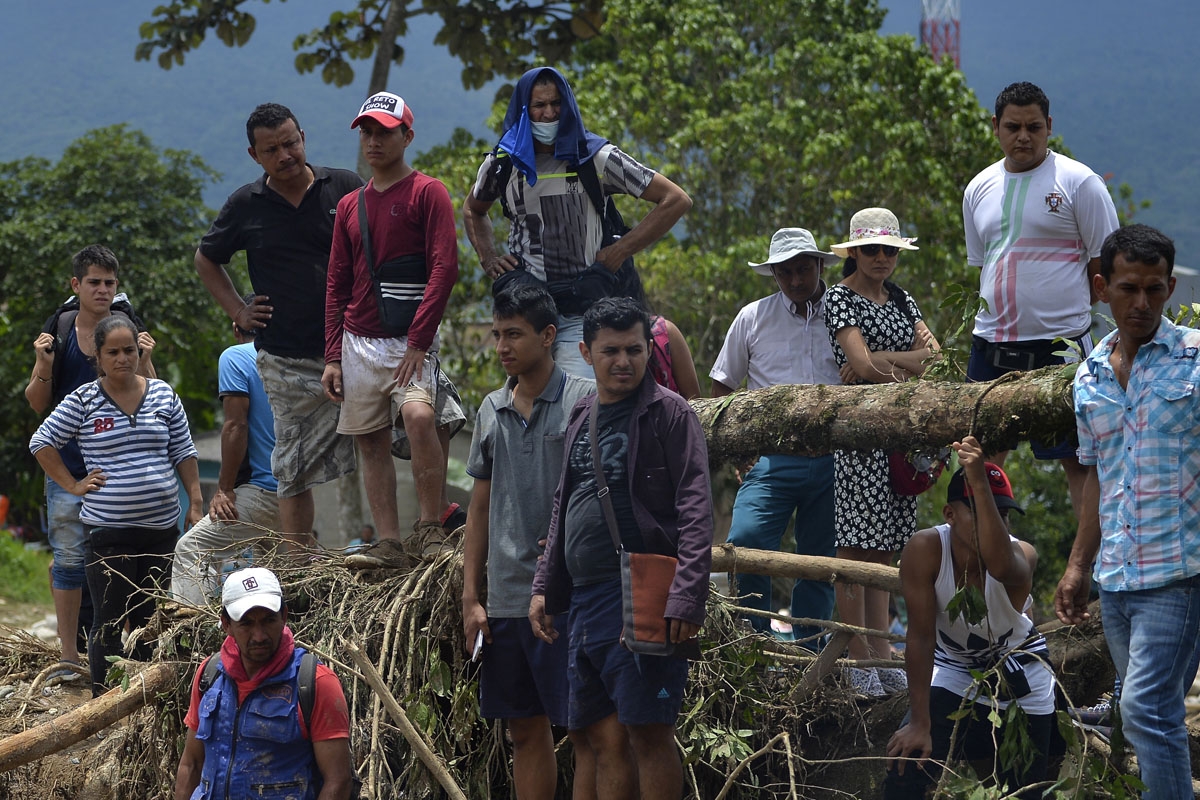 This type of a disaster is also hard logistically. Your cameras and the computers that you need to send your images all run on batteries. And batteries need to be recharged. And after this type of tragedy, there isn’t electricity — Mocoa hasn’t had electricity since the slide. So you try and conserve your batteries as much as possible. Whenever there is a generator around, or they run one at the hotel, you charge up because you don’t know the next time you’ll get such an opportunity.

It’s also very difficult moving from site to site. The disaster zone is huge and the boulders and trees strewn everywhere by the river are incredibly big.

When walking around, you have to be careful. To start with, it’s difficult to reach any particular site — you have to walk through the mud, the rocks, the fallen trees. And you’re carrying your cameras, which adds to the bulkiness and weight. There is always a risk of an accident. You have to be careful where you step so that you don’t get mired in the rubble. A wall can come down. So you have to be extremely careful and concentrate on what you’re doing all the time. At the same time, there is constant movement around you. People are retrieving their belongings, other people desperately searching for buried loved ones among the rocks, moving the little that they could retrieve. 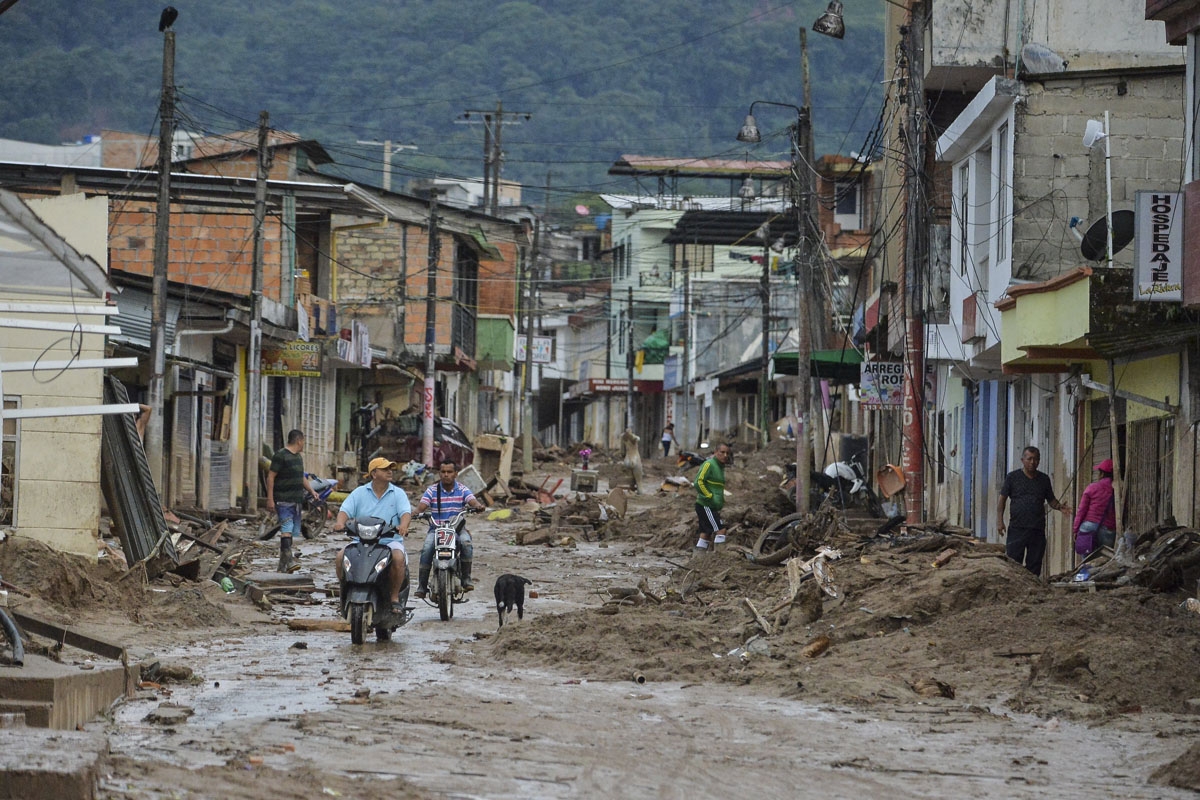 Another problem is food and water. It becomes in short supply very quickly. Luckily I stocked up on about three or four days of canned food and water before I got here.

The funerals are incredibly difficult to photograph. It’s a very intimate moment for the families — people who not only have  lost loved ones, but have also lost nearly all they own — and you’re there snapping pictures. Plus it’s not just you — when there is this kind of tragedy, there are a lot of people around wanting to record the scene, lots of photographers and cameramen.

The funerals are what affected me the most. The images from them will stay with me for a long time. One scene that I will remember is a group of people waiting with picks and shovels outside the cemetery gates. They were waiting to be allowed inside to identify a relative’s body, then dig his grave and bury him themselves. 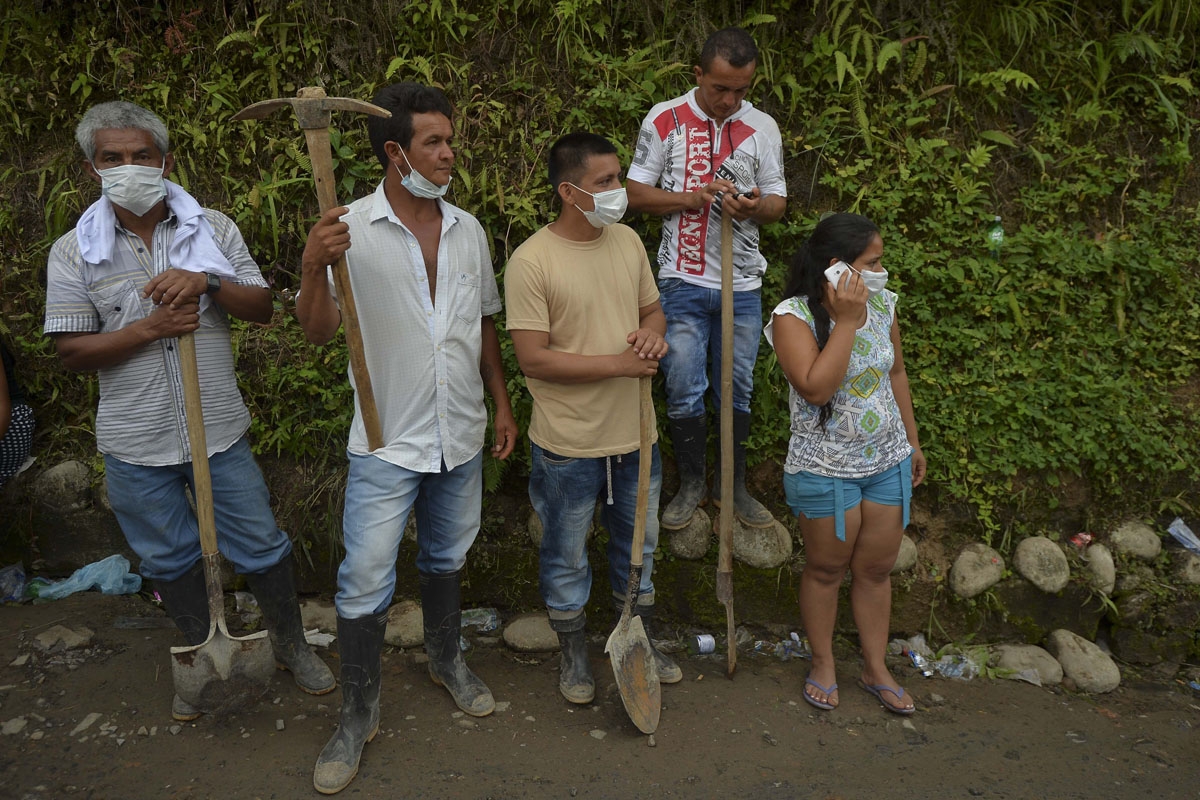 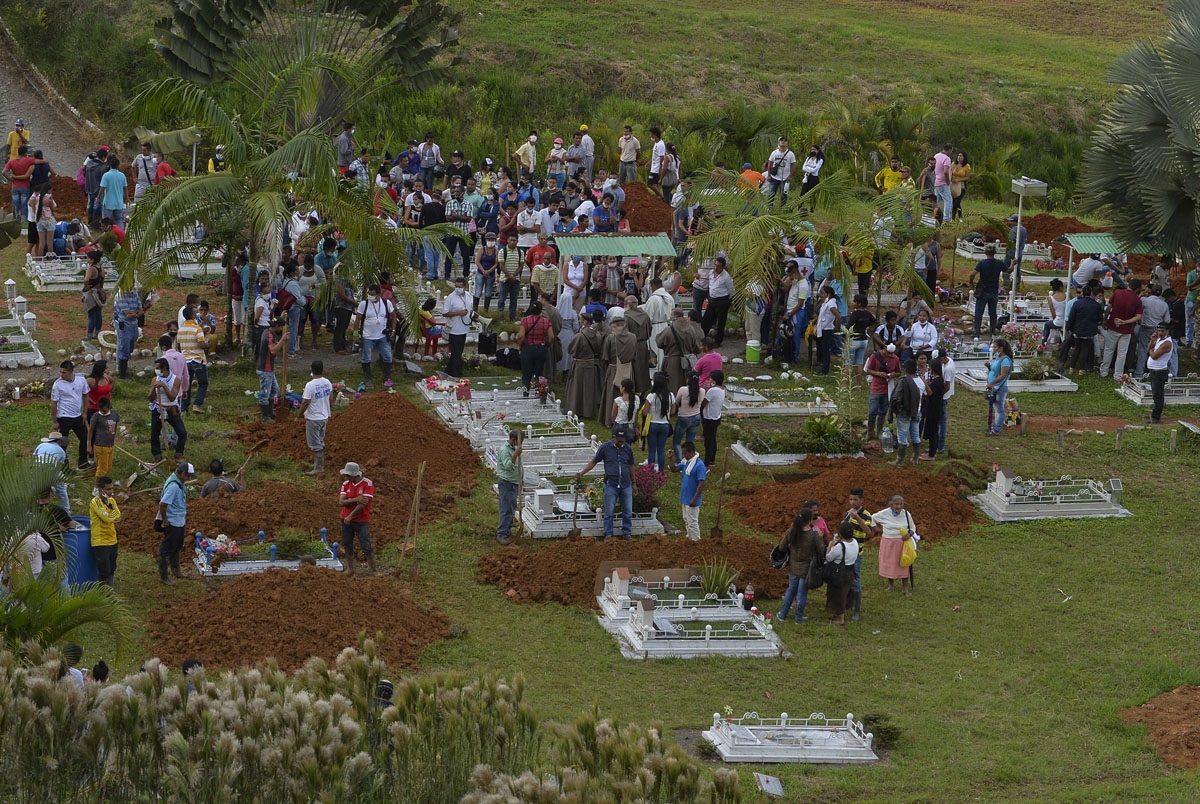 And that’s what they did. They dug the earth, they put the body inside, covered it and then cried for their loved one.

Some families were burying several relatives at a time. Every so often, someone would wail, “Why did this happen?!”

This blog was written with Rodrigo Almonacid in Bogota, Joshua Berger in Montevideo and Yana Dlugy in Paris