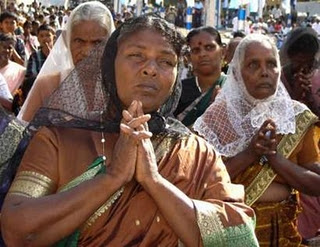 Sri Lanka (MNN) — A persecution trend has been quietly taking place in Sri Lanka. People hostile to Christianity have been approaching churches – often in more rural areas – and saying that because of a 2008 circular, if the church is not registered, they have to shut down.

The circular in question was issued nearly a decade ago in Sri Lanka by the Ministry of Buddha Sasana and Religious Affairs. It states that churches should be required to register with the state; however, the directive has no teeth to it legally, and a church registry hasn’t even been set-up.

So what exactly is a circular? In a Western context, the word ‘circular’ sounds like it’s just a periodical or a newspaper.

Todd Nettleton with Voice of the Marytrs USA explains, “My understanding is a circular like this is kind of a proposed law and it circulates through the different departments of the government and through the different parts of the parliament, but it wasn’t actually voted on and approved to become an official law.”

However, churches don’t always know that this circular can’t force them to stop meeting because they didn’t register. And the people harassing them know how to manipulate it.

“For maybe an uneducated pastor in a rural area, you get a bunch of people [who] come in, they look official, they have a document that looks official, and you feel frightened by that. So it’s really used as an intimidation factor more than carrying the force of law and being upheld by the courts or upheld by judges there. It’s really just a tool for intimidation.”

VOM Korea is petitioning to dismantle the 2008 circular so it can’t be used to manipulate minority Christians in Sri Lanka anymore.

Since the circular was issued, a new government in Sri Lanka was set up in 2015. There may be hope to successfully repeal the circular and its misuse with the most recent administration. Most of Sri Lanka is Buddhist accounting for 70 percent of the population, but the country still promotes freedom of religion.

“[With] the new government, so far, my understanding is the Christians there expected improvements in religious freedom, improvements in respect for the Evangelical Church, which makes up just a very small percentage of the population of Sri Lanka.”

Nettleton says there’s a few things you can do. “I think one of the things obviously is just to be aware of what’s going on. That helps us to pray effectively for Christians in Sri Lanka, being able to understand some of the challenges they face.”

You can also sign the petition with VOM Korea here!