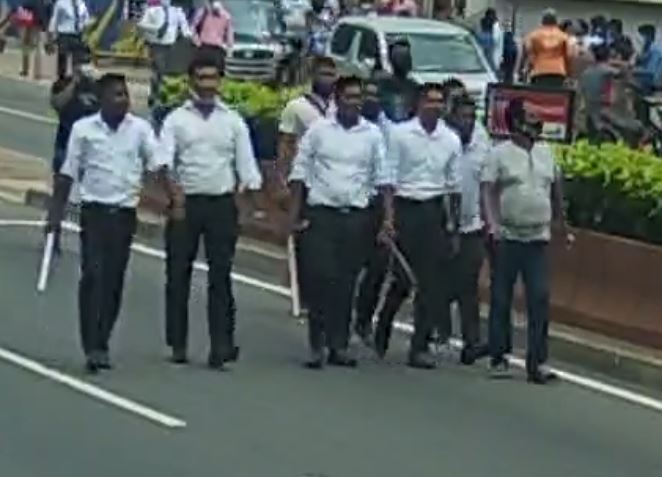 Image: Politiacal thugs, coming out of Mahinda Rajapaksa’s official residence on 09th May 2022.

Criminal proceedings were started in the Colombo Magistrates Court yesterday for the arrest of former Prime Minister Mahinda Rajapaksa, several members of parliament of the Sri Lanka Podujana Peramuna(SLPP) and the police for their alleged involvement in the violence which took place on Monday this week.

The other defendants in the case are Johnston Fernando, Sanjaya Edirimanna, Sanath Nishantha, the Mayor of Moratuwa Saman Lal Fernando, Senior DIG Deshabandu Tennekoon and the Inspector General of Police C.D Wickremeratne.

Among the provisions in the Penal Code which the Petitioner states have been violated are those related to the convening of an unlawful meeting and participating in it, harbouring people who were paid to take part in an unlawful meeting, inciting violence, intimidation and causing willful injury.

In his petition the Petitioner states that on the morningof 9th May this year SLPP parliamentarians with the support of representatives of the provincial councils had organized a meeting at Temple Trees, which is the official residence of the prime minister, for about 5000 people who had come from various parts of the country. The meeting was organized for the former Prime Minister Mahinda Rajapaksa to meet his supporters.

The Petitioner states that through media visuals he was able to see how MPs Johnston Fernando, SanjayaEdirimanna, Sanath Nishantha and Saman Lal Fernando participated in the meeting and how Johnston Fernando and others roused the people with their speeches.

The Petitioner states that the participants in the meeting approached MynaGoGama and GotaGoGama which had been set up to protest against the government and unleashed violence on them. He states that they used poles and sticks, damaged property and threatened to kill the peaceful and unarmed protesters in these two sites. The Petitioner states that following the severe attacks on the peaceful protesters they had to be taken to the Colombo Teaching Hospital for treatment.

The Petitioner goes on to state that the police were present when the attacks were taking place and did not do anything to stop it. He states that DeshabanduTennakooon who is the SDIG in charge of the western province was near the Galle Face Hotel when the attacks were taking place but did not do anything to prevent them. He was seen with MP Sanath Nishanthawho was at the meeting which was held in Temple Trees.

The Petitioner states that at about 11am on the 9thmorning he had lodged a complaint (CIB 1 03/49) atthe Kollupitiya Police station about a plan by a certain group of people to attack the protesters and the protest site and that no preventive action was taken by them. He goes on to state that justice was not done because the police turned a blind eye on the attacks.

The Petitioner states that violence unleashed by the people who came for the meeting is spreading through the country causing damage to property and harming life.