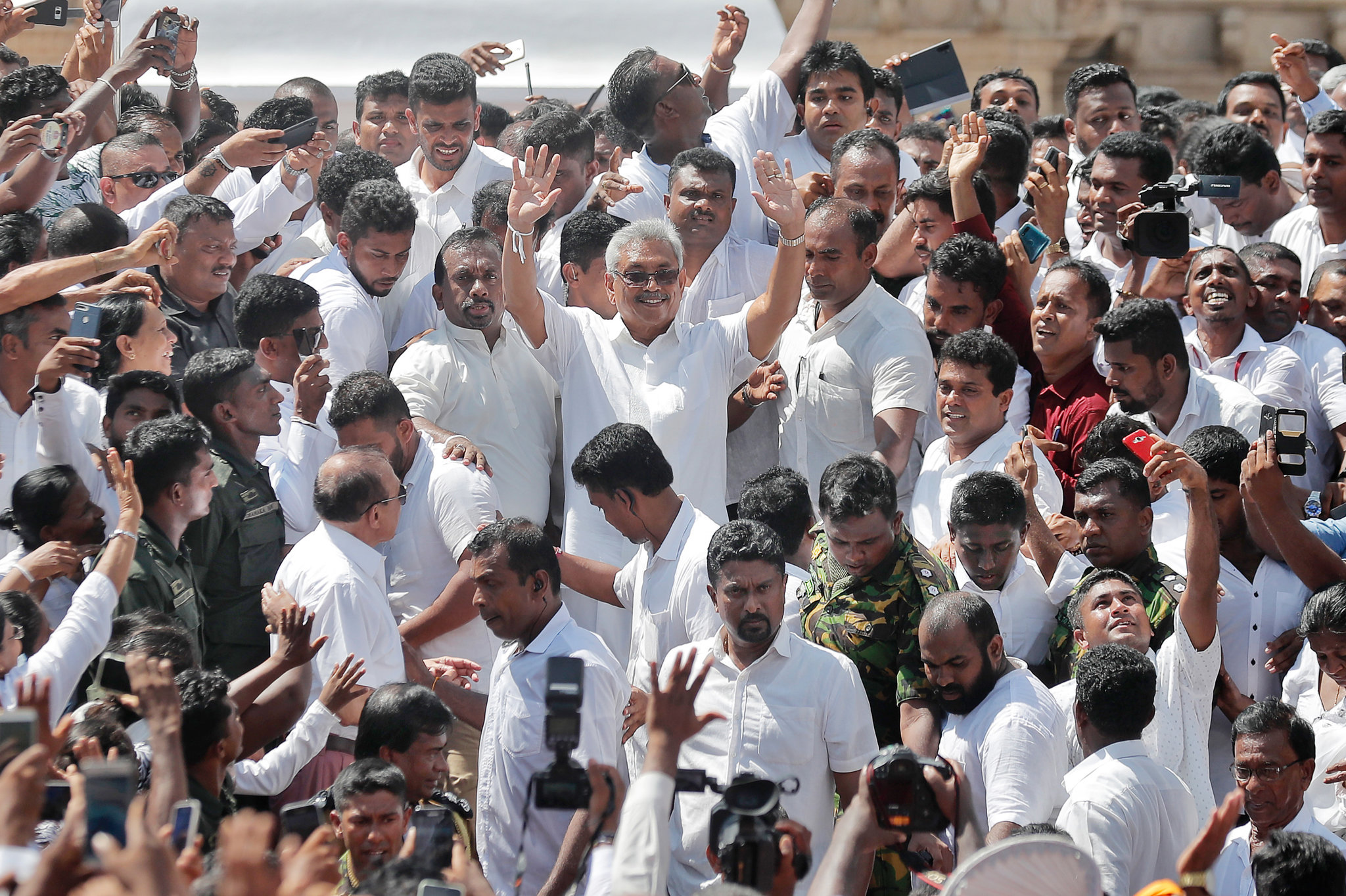 Gotabaya Rajapaksa has been winner on four counts out of five in the public relations domain. He has come off champ in the fight against Corona, he is applauded for cracking drug trafficking and clobbering cartels, people approve of his intervention to clean up rotten prisons and he is addicted to monk veneration. (New virus outbreaks and involvement of cops and the STF in the drug trade may tarnish his reputation; let’s see). Where he has slipped is in dealing with the Central Bank but the real reason for that blunder lies deep – the government is facing bleak financial and economic prospects later this year extending across 2021 and maybe into 2022. The adversity is due to corona and a global recession, but the Sri Lankan state too is broke. The electorate however is not tuned in to impending economic bad news and the plus points are centre stage, therefore Gota is riding high. He is callous to Muslims but the Sinhalese don’t care and the monks love it.

Bonapartism is a term coined to denote a larger than life figure who rises above a shambolic and anarchic scene, pushing aside political organisations, class interests and institutions to restore “order”. Etymologically the term originates with Napoleon who restored stability after a near decade of chaos following the French Revolution; First Consul in 1796 and then Emperor in 1804 basking in glorious victories across Europe. Historically the greatest ‘Bonaparte’ of all was not Napoleon, nor was it Julius who was slain before he made it, but Julius’ grand-nephew Octavius who as the first Roman Emperor took the name Augustus and rose above Senate, haggling patrician factions, disorderly plebeian masses and the army to consolidate absolute power. Many consider Augustus the greatest Roman emperor; he fortified the Empire, spread civilisation and launched celebrated Pax Romana.

Lanka can only caricature Rome or Revolutionary France but there are parallels that create rulers who focus power in themselves. The first parallel is that we face economic ruin (instead of turmoil of war, though we did have one). Second, politics is a disorderly two tribe (gothra) mayhem originating in UNP or SLFP genes; corruption, nepotism and plunder of public funds is rife. Politicians are universally hated; the public is fed-up with parties, leaders and state officials. The minorities resent the military and the police; the country is intensely polarised along racial and religious fissures. This is not much different from that which brewed Bonapartism elsewhere. How often have you heard the refrain “We need a tough Lee Kuan Yew or Kemal Ataturk”, “What’s wrong with dictatorship if it puts the country right” and “Lock up all the bastards and let Gota get on with the job”? This public frame of mind brews dictatorship like yeast matures wine.

However, the experience of history is that 99% of 20th and 21st Century dictators brought only blood, misery and tears. I have illustrated this with data in my 21 June column; they are like Caligula, Nero, Pinochet, Hitler, Mussolini and Stalin. Greats like Augustus and Napoleon you can count on the fingers of one hand, modern achievers like Lee Kuan Yew and Ataturk on the fingers of the other. The few autocrats who made a mark were unifiers of empire, Europe, city state or nation. Singapore’s Lee is celebrated for unflagging opposition to the politics of race, religion or language. How different unifiers are from exploiters of racial and religious bigotry. Ratana pours venom on anything Muslim stirring up a repeat of Aluthgama or Digana. The authorities do nothing to stop his malicious tirades against Dr Shafi. The Gnanasara outburst at Aluthgama incited riots but the venerable monk continues to snuggle in Gota’s fold. GR, MR and the authorities look away and permit provocation. The parallel of putative GR Bonapartism is with JR’s racism, not with the great unifiers. GR will allow to happen to the Muslims what JR encouraged in 1983 against the Tamils.

A factor that magnifies the possibility of GR Bonapartism is that neither Ranil nor Sajith can be trusted to block a 20th Amendment designed to roll back the gains of 19A. It took much struggle, a hard-fought election in 2015 and finessing Sirisena’s gluttony to push 19A through. It is far from perfect due to conflicts within yahapalnaya, but is infinitely better than not having it at all and living with 18A. The government is now seeking a two thirds majority to roll back to a JR era constitution. The tragedy is that though the electorate will not grant two thirds, neither Ranil nor Sajith can be trusted to block a Bonapartist 20A. Other calculations occupy their minds. Ranil needs to prevent an election or avert prosecution; lacking stature of his own Sajith will seek accommodation and a ladder to climb.

[title]First: Economic meltdown[/title]
A Bonapartist regime will go down in tears for two reasons. First, if dictatorship, then in short-order there will be economic meltdown. Readers have been exposed to loads of comments on the economy; hence few words will do. (i) Debt servicing will reach “I can’t breathe” proportions in Q3/4 2020; survival is contingent on Chinese and Indian largesse, a moratorium on repayment and MCC dollar deposits. (ii) Balance of Payments will remain in the red for very well-known reasons. (iii) The budget will run a substantial deficit since revenue has declined and budgetary expenses risen, both sharply. And (iv) employment is in bad shape but statistics are not available. A dictatorship will aggravate most of this due to domestic resentment and international antipathy.

The Executive is visibly scurrying like a headless chicken, grasping at every straw to avoid default on foreign debt servicing. China, India and the US have us by the short hairs and pulling in three (!) directions. The upshot is that the regime has no attention span left to think about rebuilding the economy. There are Task Forces galore, including one chaired by Brother Basil, all stuffed with incompetents who can’t plan for toffee. Fundamentals like the role of the State, the scope of planning (dirigisme), how much trust to repose in business and capital to rebuild a post-Corona nation, and devolution of economic decision-making to the regions, especially the North and East, are issues that will be ducked. Chinese and Indian powered industrial zones, balancing against American, European and Japanese direct investments are crucial; expanding exports and redefining relationships with SAARC and other regional economic blocks is imperative. No progress is visible on any of this.

[title]The second reason: minority issues[/title]
The second reason a Bonapartist regime will go down in tears is conflicts with and in respect of minority issues – give concessions and protection and you are damned by the Sinhalese, don’t and you are cursed by Tamils and Muslims. This is all depressing, but I don’t want to be distracted from my topic today – authoritarianism. Let’s think six to 12 months ahead – your expectations are as good as mine but this is my column! My assumptions are: (a) An authoritarian executive, (b) an initially pliant parliament, (c) an effete and ineffective UNP (Ranil and Sajith), (d) an isolated and alienated TNA and Tamil parties, and (e) a JVP-NPP parliamentary contingent which at very best will be 15. That’s one part of the balance of power equation. You can paint a different scene – blossoming participatory democracy, blissful minorities, economic splendour, and thence formulate a dissimilar discourse. That’s up to you.

I just said “one part of the balance of power equation”, the other part is a tricky and enigmatic GR+ Executive vs MR+ Parliament+ Cabinet relationship and how this dynamic will unfold. I won’t venture into family relationships since these speculations are laced with gossip and fake news. My point is that even if an SLPP Cabinet and an SLPP majority Parliament behave initially like poodles of a hyperactive Executive, friction will develop. Parliament will be far removed from an Executive dominated by military brass, Viyathmaga hangers on and Yuthukama catchers. In this strange world, Cabinet though technically Executive, will find itself allied with Parliament. We have not seen such a strange Executive-Legislative relationship in Ceylon/Lanka previously; it derives from the nature of the foetal actors in the gestation of GR Bonapartism. The JR process was different both in incubation and maturity; his devotees were party, parliament and business. The SLPP-in-parliament, though scum in the eyes of purists, will seek their leadership in MR; their kind of eating, drinking backslapping fellow who they can relate to and whose protection they need – vide fraud Mahindanada and Stadium Bandula.

It’s nice to say that if President and Parliament are from the same stable government will be stable (silly pun!) but given the peculiarity of composition of this Executive clique it won’t be a bed of roses. Political logic will trump brotherly love; observe that I am making no reference to family affairs. Hence while we are at a nascent stage in the gestation of GR Bonapartism, we will after the election enter a phase when Executive and the Legislature will dispute power despite their origin in the same stable (or sty) and despite the leaders belonging to the same clan. This is because the parliamentary system has deep 70-year-old roots in the country and will not roll over and die without a fight; the fight will be populist in the public domain, greedy and opportunist in the MP realm.

All this the Bonaparte, the Executive branch, Cabinet-Parliament, and some power sharing arrangement still to take shape, will have to digest and take on board. With power structure jelly-like, Bonapartism half-baked, the vacuous military ignorant of economics, and still wet-behind-the-ear catchers roaming in the presidential court, Lanka’s economic prospects are grim. This is one Achilles’ Heel of infant Bonapartism, but it has a like-heel on the other foot. “Those damnable minorities!” You can have pluralism or you can have a race-drunk saffron-drugged culture, but you can’t have both.