Person on warrant at the President’s house 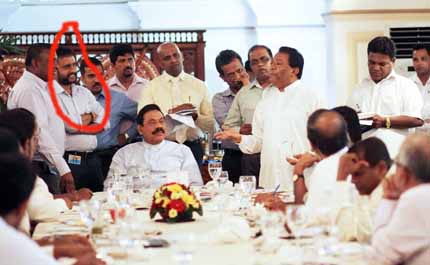 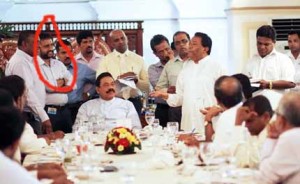 President Mahinda Rajapaksa met the editors of print and electronic media at Temple Trees on the 27th morning. Media Minister Keheliya Rambukwella, Higher Edcuation Minister S.B. Dissanayake and Presidential Advisor Lalith Weeratunge also participated in the meeting.
It is interesting to note that journalist of the state owned ITN, Sudharman Radaliyagoda, who has an open warrant issued by the Court against him was seen sitting near the President.

The President is the commanding officer of the three armed forces.

The editors of the national newspapers like obedient students continued to look at their notebooks while the President spoke.

Radaliyagoda had recently told another journalist, “The President would just shout at me in filth if I’m found guilty. I will not be punished. No one will be punished. He is a great person who is just right for us.”