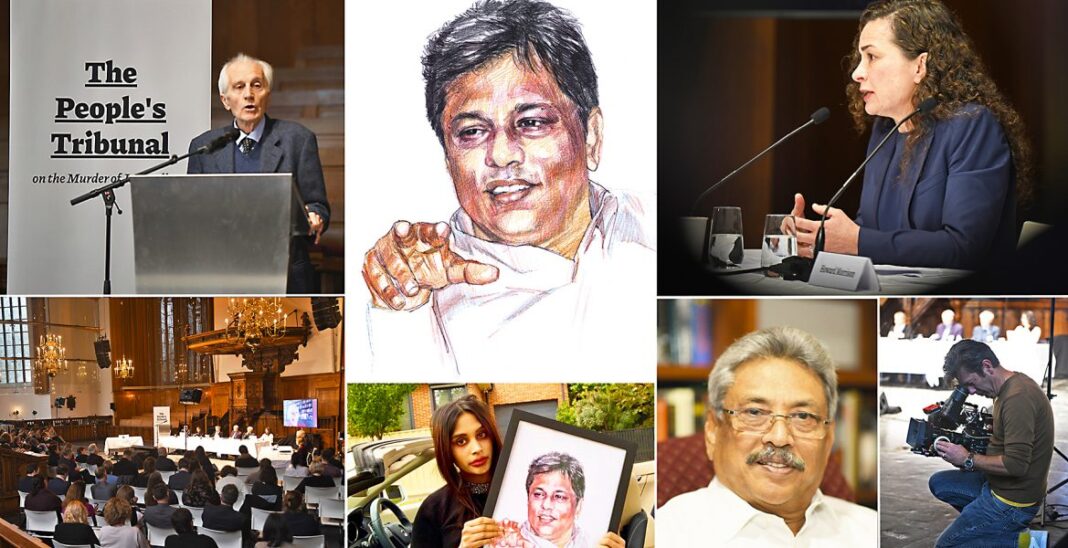 The issue of ​​the murder of the editor Lasantha Wickrematunge, who was murdered in Colombo on January 8, 2009 , will be taken at a  special people’s tribunal in the spring of 2022 in . South Asia’s editor Johan Mikaelsson, who delved into the journalist murders in Sri Lanka, was present in The Hague when the first session was held.

November 2, 2021, was celebrated in the usual way on International Day to stop impunity for crimes against journalists. On the same day, a newly established People’s Tribunal came to light in The Hague.

The fact that the tribunal is based in the Netherlands, with historical ties to Sri Lanka and in The Hague, where the International Criminal Court ICC is headquartered, does not make the matter any less interesting.

The second session was planned be held January 12-13, 2022. The murder of Lasantha Wickrematunge, editor of the Sunday Leader in Sri Lanka, on January 8, 2009, would then be dealt with. Due to the spread of the coronavirus and the shutdown in the Netherlands, it will instead be held in April and the hope is that more people with an interest in the case will then be able to attend.

For total murder of journalists in the world, the People’s Tribunal in The Hague states that 81 percent are unsolved. For Sri Lanka, the figure is 100 percent. Total impunity speaks a clear language to perpetrators, victims, relatives and other survivors.

Journalists Maria Ressa from the Philippines and Dmitry Muratov from Russia were awarded the 2021 Peace Prize for their work to “safeguard freedom of expression, which is a prerequisite for democracy and lasting peace.” The issue can now be extended by the People’s Tribunal on the Murder of Journalists.

The organizations Free Press Unlimited, Reporters Without Borders and the Committee to Protect Journalists work under the project name A Safer World for the Truth with the People’s Tribunal to produce facts and testimonies about three unsolved murders in Syria, Mexico and Sri Lanka.

Common to the three cases is that they are seen as particularly clear in that the motives for the murders were to silence uncomfortable truths and that there is substantial evidence that suspected perpetrators with links to those in power could have been convicted.

The trial in the People’s Tribunal on the Murder of Journalists is described in detail in Johan Mikaelsson’s report from The Hague in Amnesty Press November 2021. ( In Swedish)

The work of the People’s Tribunal began long before the Norwegian Nobel Committee announced this year’s laureates, who were then awarded the Peace Prize in Oslo on 10 December 2021.

On International Press Freedom Day on 3 May 2022, rulings in the cases will be delivered in the tribunal. The rulings have no legitimacy in the three countries concerned. But if the outrage over impunity is genuine, the fact that it has been pointed out that it has systematically murdered journalists should not be able to pass unnoticed in the relations between countries’ governments.

Some peace prizes have long repercussions through laureates who have the ability to raise public opinion and put issues on the agenda. A name that goes through the brain is Malala. The now 24-year-old Pakistani rights activist received the award in 2014. Since then, she is a world name who personifies the right to education. She is listened to forever.

Maria Ressa participated in the opening of the People’s Tribunal in The Hague in November. She spoke via a link in front of more than 300 people on site in Neu Kirk and a larger number through the live broadcast, which can be seen in its entirety on the People’s Tribunal’s website. Through her way of being, Ressa has an ability to spread enthusiasm and she can give energy to anyone who strives for justice.

One of three selected cases concerns Lasantha Wickrematunge, the editor of the Sunday Leader magazine. He was murdered on his way to work on January 8, 2009 in Colombo. Four motorcycles with two men on each drove up by the car and the men smashed the car windows.

During the attack, the men punched a deep hole through Lasantha’s skull and into the brain. Possibly a tool was used to kill cattle. The killers drove from the scene and past nearby military posts without stopping.

The murder is one of the most described journalist murders in the world. In addition to the perpetrators, Sri Lanka’s current president Gotabaya Rajapaksa, then head of the Ministry of Defense, and his brother Mahinda Rajapaksa, who was then president, could have been put in front of the counter [court]. There were motives, means and an opportunity to carry out the murder – and to silence the truth.

At the time of the assassination, Lasantha Wickrematunge had been sued by Gotabaya Rajapaksa because the Sunday Leader newspaper reported on his involvement in corruption in the purchase of used fighter jets from Ukraine through intermediaries.

Now the government and the main suspect, Gotabaya Rajapaksa, are instead “prosecuted” at the People’s Tribunal in The Hague and given the right to a defender.

Like all other crimes against journalists in Sri Lanka, the murder is unsolved. No one has been convicted of any of the crimes, which in 2004-2010 included targeted murders (a total of 44 murdered, killed or missing journalists, shot newspaper deliverymen and media workers), blown-up newsrooms, burned printing presses, hatred, threats, beatings and torture.

Most of the crimes were directed at Tamil journalists and the media. But it was the assassination of the prominent Sinhalese editor Lasantha Wickrematunge that gave rise to shockwaves within the country. Press freedom organizations around the world had certainly drawn attention to the murders of Tamil journalists, but now the dust gates were opened.

For total murder of journalists in the world, the People’s Tribunal in The Hague states that 81 percent are unsolved. For Sri Lanka, the figure is 100 percent. Total impunity speaks a clear language to perpetrators, victims, relatives and other survivors. Can there be a change in 2022?

Clear memories, thoughts, evidence and fragments are woven together and form chains of events that provide context, explanations and meaning to historical events. Traces remain and independent lawyers can now do their utmost to see the truth and find answers. This is how unsolved murders can be solved and some form of international justice can be done. It remains to be seen who wants to listen and who wants impunity to last.

The journalist Johan Mikaelsson has written the book When they kill journalists – A personal description of Sri Lank a (2015), as well as a long series of reports and articles before and after about impunity for crimes against journalists, both in South Asia and in Amnesty Press and Swedish Dagbladet.

The report “Designated as a predator on press freedom denies murder” which was published on Sydasien.se in November 2018 contains an interview with Gotabaya Rajapaksa from 2018. He is now formally designated and accused of being behind the murder of Lasantha Wickrematunge. Gotabaya Rajapaksa has been the President of Sri Lanka since November 18, 2019, which currently gives him diplomatic immunity. An English version of the report was published by Journalists for Democracy in Sri Lanka ( JDSLanka.org ), made by exile journalists from Sri Lanka.

The online newspaper Colombo Telegraph, published from London, has in detailed articles described the course of events surrounding the murder and how the government and the military in Sri Lanka work to silence the truth and also attack those who report the murder. The Sri Lanka Brief published by Geneva also reports continuously on the case.

The magazine Sunday Leader as Lasantha Wickrematunge started in 1994 together with her brother Lal Wickrematunge, was sold in 2012 and was finally closed down in 2018.

The article “Murder of editor in Sri Lanka is prosecuted for the UN on anniversary” from January 2021 describes, among other things, how the daughter Ahimsa Wickrematunge fights for justice.

Facts | When Ceylon was a Dutch colony

In the years 1658–1796, Ceylon, as the island was then called, was a Dutch colony. The Netherlands, or Holland, was second, after Portugal, and was accompanied by Britain, which handed over power to a local government in 1948.

Around the island there are traces of the Dutch’s time on the island. Landmarks and places can also be marked in the Netherlands. Not far from The Hague is the city of Delft. And Delft is the Dutch name for the island of Neduntheevu, south of the Jaffna Peninsula in northern Sri Lanka. And in Jaffna there is a Dutch Fort.

There are also descendants. Burghers are called the “ethnic group” in Sri Lanka that originates from relations between islanders and Dutch, Portuguese and British.

This article was first published in Swedish journal Sydasien  and translated from Swedish language with the help of google translation.